Flatulence: When the stomach is a fused bomb 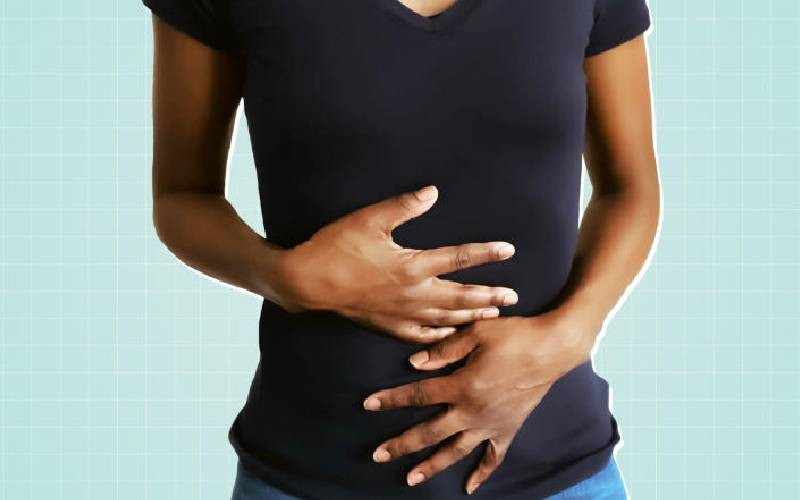 Violet Muhonja rubs her ten-year-old daughter’s abdomen with ash. The girl is restless and uncomfortable. She suffers from a bloated stomach, thanks to consumption of chips bought on the streets of Mbale town, in Vihiga County.

“Swelling of my daughter’s stomach is worrying me. I have given her a mixture of salt and sugar, but she is not getting better,” laments Muhonja.

The condition is characterised by belching, abdominal rumbling, farting, constipation, and stomach pains.

Though Mbale hospital is located a stone’s throw away, the mother is reluctant to take her daughter there for checkup and treatment. She argues that bloating is treatable with herbs, ash, and a mixture of salt.

“Anytime my daughter feeds on deep-fried meals, she bloats which takes longer to ease but I know she will be okay,” she reasons.

Her experience mirrors the bothersome experience facing thousands of Kenyans daily, but which is often ignored.

According to a journal of Neurogastroenterology and Motility published in October 2013, bloating is a symptom in patients with irritable bowel syndrome, and other functional gastrointestinal disorders, as well as in patients with organic disorders.

The publication notes that clinicians report too much tummy gas, heavy, discomfort and a full belly from patient.

“The severity of bloating is varied from mild discomfort to severe, and it is one of the bothersome symptoms of the patients, affecting their quality of life,” reads a section of the publication.

Erick Ngereso, a dietician and nutritionist at Kenyatta National Hospital, says people develop bloating from feeding on legumes, foods rich in dairy and high calories like nyama choma and chips.

Nutritionists advise on soaking legumes and discarding the water, before cooking to limit bloating.

Ngereso adds that overfeeding also contributes to bloating due to production of carbon dioxide and ammonia.

He adds: “People should avoid overfeeding for it is a potential cause of bloating. We need to eat slowly, and reduce foods rich in fats.”

Digo suggests that one way of preventing gas and bloating is a change of diet.

The nutritionist says that low fermentable oligosaccharides, disaccharides, monosaccharides, and polyols (FODMAP) diet has been proven to help with irritable bowel syndrome and gas symptoms.

Oligosaccharides are present in foods like wheat, onions, garlic, legumes, and beans.

Foods rich in disaccharides include lactose in milk and ice cream, while monosaccharides like fructose are a type of sugar found in fruits and honey.

Polyols, or sugar alcohols, are present in foods like apricots, nectarines, plums, and cauliflower, as well as many chewing gums and candies.

Digo says those who are sensitive to FODMAP-rich diets may not always fully absorb these carbohydrates, but instead, they are transported to the colon, where bacteria ferment them and release gas.

“Bloating simply implies that you are feeling full, and the gases that are expelled cause discomfort,” he says, adding that fruits like avocado ease bloating as they’re nutrient-dense with high water and fat content.

“We encourage the consumption of fermented foods like yogurt, mala, and mursik because they contain probiotics,” says Digo.

He explains that “probiotics are microorganisms that nourish the cells that surround the gut, preventing potentially ingested harmful bacteria from entering the gastrointestinal tract. Dairy products like mursik and yogurt play a role in this process”.

Other locally available fruits that ease bloating include apple, papaya, and kiwi fruit, as they contain antioxidants and fibre.

Vegetables like beetroot leaves and spinach, he adds, are  also excellent in easing bloating besides feeding on a balanced diet that entails proteins, vegetables, starch, carbohydrates and whole grains which have high fiber content and are hydrating.

“The essence of increased fruits and vegetables is to help in easing bowel movement that helps empty gases through long call. Reducing roughages leads to constipation and increased bloating,” adds Ngereso, who also encourages people to exercise as it helps in panting.

“The walks, swinging, and swimming expel excess air, and contract muscles of the abdomen, helping the passage of gas through long call, or improved motility in the guts,” says Ngereso.

At least five cases of bloating are handled at the KNH nutritional clinic daily with more at the endoscopy unit.

“Bloating is an area of concern, yet individuals believe it is normal, a condition we can prevent as opposed to treating,” says Ngereso.

He adds that bloating is now common among all ages, especially teenagers, due to peer eating of fat-rich foods.

Newborn babies can also experience bloating through breastfeeding and “if a mother does not consume highly nutritious diet, it is a pathway to bloating in infants,” says Ngereso, adding that there is limited documented data on bloating cases as most Kenyans buy medicine over the counter while others resort to herbal medicine.

Digo encourages people to embrace kitchen garden farming to prevent cases of bloating as most foods sold in the market may have overstayed, not fresh, and could lead to toxicity, and create imbalance in the body hence bloating.

Also, feeding on a balanced diet and increased fruits and vegetable intake as they help “in easing bowel movement and emptying gases through long call and thus reduced roughage intake leads to constipation and increased bloating,” says Ngereso, who also encourages people to exercise.

The Neurogastroenterology and Motility publication notes that to treat bloating, clinicians should consider a combination of various mechanisms as there is no indisputable treatment for bloating and thus “treatment strategy may include pharmacologic approaches, dietary modification, and psychological therapy”.

By Ravjit Sagoo Nov. 28, 2022
Health & Science
Premium Get checked if you can't start pee or pee too often, at night