I beat poverty by thinking like a job creator

Many who saw Dr Paul Kibicho as a child wouldn’t have imagined he’d become the person he is today.

Born to peasants, his family lived under the shamba system where the government allowed the poor to engage in subsistence farming on its land.

In 1998, Dr Kibicho’s family and many others were evicted from the land and left stranded.

He was a form one student at a harambee school because his parents could not afford the national school he had been placed in.

After a three-month stay on a Good Samaritan’s compound, the family moved to a makeshift home on his grandmother’s small piece of land in Ndaiga in Laikipia.

Dr Kibicho returned to Nyeri to live with his mother’s friend, where he encountered further hardship.

Here, he would wake up at 4am to milk cows and take the milk to the shopping centre for sale head back home and then leave for school.

“She was very cruel. I told my parents at the end of the school term that if I was going back to live with her, I would just end my schooling,” he tells Enterprise.

That’s how he ended up with the choice of having to live with his brother and walk 64 kilometres daily to school or quit. It was a no-brainer for him. He loved education and believed it would be his way out of poverty so the long trek and many days out of school were a small price to pay.

“In February 1992, I had gone to visit former classmates. I went to answer the call of nature. At that time, having toilet paper was a preserve for the rich. So instead of toilet paper, they were using newspapers. As I was relieving myself I saw an advert that read: Earn Sh1,000 while undergoing a salesmanship training course and Sh6,000 upon completing. I did not use that newspaper, I kept it in my pocket,” he says.

His parents did not have the required Sh1,500 to take him to the college, Diplomat of Kiambu, Nyahururu branch.

“I bought a small exercise book and went around the village pledging and raised Sh700. I added to some savings I had and it came to Sh1,200. Then I packed my clothes and left, and I lied to the principal that my father was in Zaire (now DRC) and would be away for four months, so to allow me to stay in school and he would pay later,” says Dr Kibicho.

Six months later, the principal gave him a recommendation letter to a certain insurance company where he worked for a year but resigned when he realised that people who had been working there for 30 years were miserable. This motivated him to move to another firm. He then joined Kenya National Assurance. By the time the company collapsed in 1996, he had created a buzz as a performer in the insurance industry, and he joined Pan Africa Life.

Kibicho was the number one insurance agent for 14 consecutive years, as a result of which the company took him to over 40 countries worldwide. He later joined Britam and worked as an executive financial consultant.

That little boy who was struggling to have a basic education now has five diplomas, two degrees – one in marketing and the other in law, an MBA in Strategic Management and a PhD in Business Administration, majoring in Strategic Management. He is now the founder and CEO of two successful companies - Panorama Consulting Co. Ltd and Quest Pinnacle Investments Ventures Ltd.

Having thrived as an employee and now as a creator of entrepreneurs, we sought to find out what it takes to transform oneself from a job seeker to a job creator.

These are the nine tips he gave us:

The purpose of education is not necessarily to give you a job. If you get a job that’s fine, but no one is interested in just any degree. It is better to have a degree that can help you become an entrepreneur. I always advise parents to take their children to vocational colleges. Let them do artisan courses, where the child can be able to create a job of his or her own.

For instance, we have a shortage of plumbers in Kenya and we are forced to outsource them from China. In the construction industry, real estate is coming up. That is the business where people have put their money. So that is where employment is, especially for people who have the relevant skills and competencies.

When it comes to electronics, how many people have gadgets today? Devices such as microwaves, phones and TV. That means that if you have done electronics at any level, whether certificate or diploma, you can make money without having to be employed.

Understand what you are good at

I realised that I was good at convincing people to buy insurance, so I doubled down and ended up being the top insurance salesman for 14 years in a row. Understanding what you are good at will give you confidence, which is important in becoming a job creator. You also need to have a strong character. People don’t want to do business with people who fear.

Learn how to do gap analyses

Doing a gap analysis means looking at wherever you are operating from and asking yourself: What are the pressing issues that need to be solved? You can then come in and solve those problems. In the process of solving those problems, you will make earnings and you will become an employer yourself. For instance, if someone leaves in Ngong and he has a problem with his computer or TV, must he travel from Ngong to the city centre? Look at the people you want to serve. What are their sources of income? What are their age brackets? What are their needs? So do the gap analysis and look at their financial strength and tackle that.

Many Kenyans lack financial discipline and hygiene. Human minds have the ability to create problems equivalent to the amount of money available. Find a place where you can keep your money without your own interference. I did that for people when I was working in insurance and it was very successful, meaning it is a huge need. You cannot be a genuinely successful entrepreneur without having a strong sense of financial discipline.

Develop a nose for opportunities

Opportunities are all over. For instance, during this high-octane campaign period, how many people made t-shirts, key holders, caps and jackets? That was a great opportunity. Someone who is an entrepreneur always has his antennae up. Because the constitution had defined the dates for the elections, we all knew that there was going to be a need for campaign posters. What about trucks? An entrepreneur would hire a lorry and install all the communication devices needed. You don’t have to have the equipment to make money. You only require to have brains to make money.

Go to any financial institution with a business plan, show them the viability of the project and they will finance you. I can hire a car on a daily basis, hire a driver and install all the equipment like public address systems. You may be charging me Sh200,000, but I am making Sh1 million. The same goes for printing presses, many of which are idle. Opportunities are endless if you know what to look out for.

Venture into an area of concentration, understand what goes on and look for synergy. Simply put, an entrepreneurial mind thinks like this: I have a friend who has this equipment but doesn’t have the courage to go looking for the business. So why don’t we become partners? I will ride on their resource and make my money. I have not spent money on the initial capital, but I am riding on their initial capital to make my money. So you form synergy. You form alliances with people who have resources that you don’t have.

Observe the movement of goods and people

If you go to Mwiki in Nairobi, you will find a gentleman called Maina wa maguru (Maina of tyres). He is the only one there who is that well known for that business. He realised early on that there were very many people with cars within Mwiki, and in a region with more than 1,000 cars, there would be myriad incidences such as tyre bursts which will require to be fixed. So look at either the movement of machinery or people. Identify what it is that you can do relating to their movement and use that platform to generate your income. You don’t necessarily have to be the person doing that. Look for people with expertise and bring them on board while you become the idea generator.

Entrepreneurial minds require initiative and originality. A gentleman that I know went to about ten 5-star hotels in Nairobi. He realised that the people who sleep there don’t do it for leisure. These are serious business executives who don’t have time to go to the shoe-shiner. So he came up with a device that shines shoes in the room, where you just place your feet, the device shines your shoes without any human intervention and you’re good to go! It is very unique. That man is laughing all the way to the bank because he became innovative, so innovation is key.

I have been preparing business plans for people, so I know that when you go to a bank with that kind of innovative business idea, the only thing that financial institutions look at is the viability of a project. 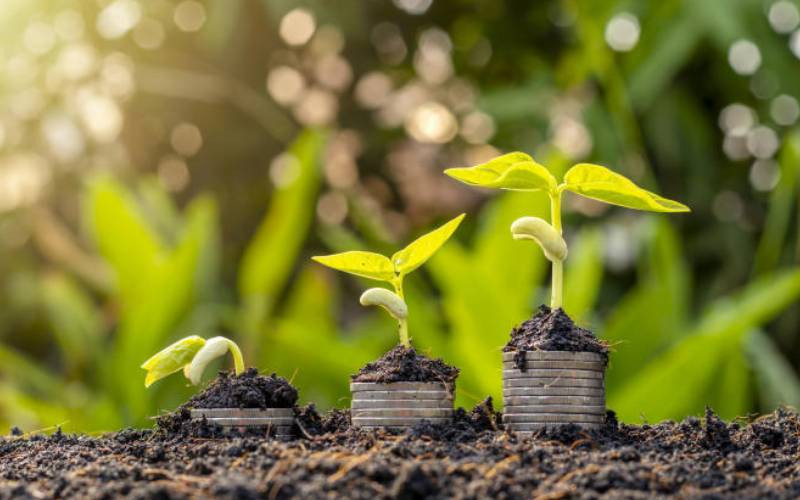 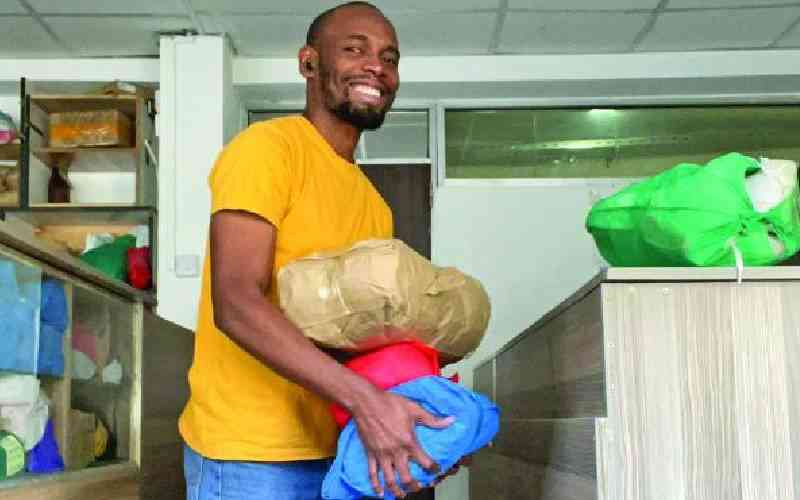 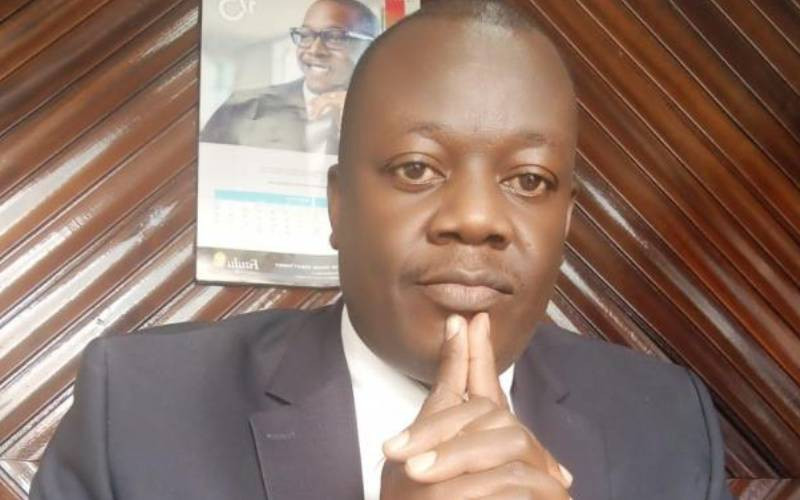 By Wainaina Wambu 11 hours ago
Enterprise
Insurer in deal to offer cover to over 100,000 dukas