The stats behind our reliance on ‘kadogo’ buys 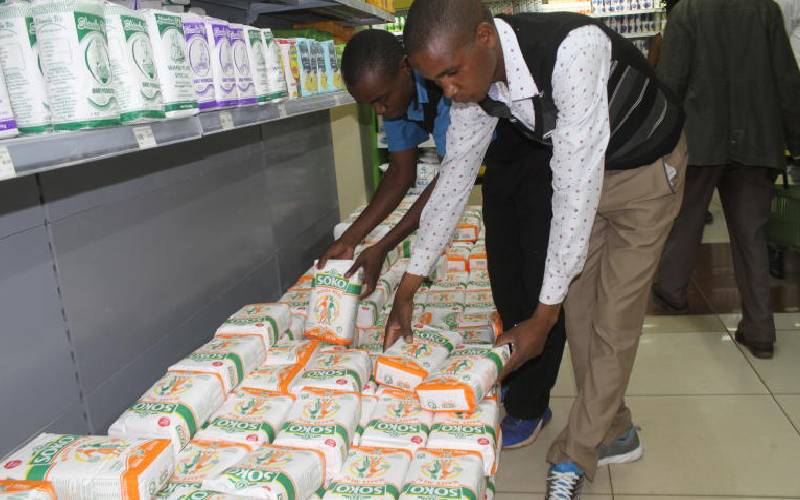 The ‘kadogo’ economy is well and truly established in Kenya. However, the downside to this is that we have to shop often to replenish the products we buy in tiny quantities.

As a result, the average Kenyan shops 21 times a month, and in 41 per cent of these trips to the shops, we’re topping up on essentials, a recent Retail Measurement Report by Nielsen found.

The findings further revealed that more than 70 per cent of fast-moving consumer goods (FMCG) transactions occur at below Sh55.

Additionally, Kenyan buyers prefer convenient, well-stocked outlets that have everything under one roof, and give them value for money – price and quality-wise.

Last year, the report noted that traditional trade (kiosks and groceries) accounted for 66.3 per cent of retail sector transactions, while modern trade (supermarkets) accounted for 33.7 per cent.

“Everyone is fighting for growth. Inflation continues to be a main concern for consumers; big traditional brands are facing challenges from smaller, more agile, regional and local players who are faster at adapting on the go. At the same time, new formats and channels are emerging, making our market even more competitive. In such an environment, finding opportunities with the right insights becomes key to help beat the odds,” she said.

What we’re doing on social media

The major difference between those who have and those who don’t has often been boiled down to time usage. Many successful people will attribute their accomplishments to knowing what to spend their time on.

Now, a report on Social Media Consumption in Kenya by the United States International University-Africa (USIU-Africa) SIMElab adds more fuel to this fire.

The report found that low-middle income earners in Nairobi spend an average of three hours a day on social media, the largest chunk of time across eight counties surveyed. They’re followed by those in the middle income category, who spend at least an hour a day on various platforms.

The study further found that the middle income residents of Nairobi mostly spend their time on LinkedIn, Twitter, Yahoo and Snapchat, while the lower-middle income population are on YouTube, Instagram and WhatsApp.

The survey reveals that due to data costs, a majority of middle income Kenyans use office Internet to access social media platforms, while the lower-middle income segment takes advantage of public wi-fi in malls, training institutions and entertainment spots.

There were also differences in consumption patterns between urban and rural residents. A majority of Kenyans in rural areas, the study found, use Facebook and WhatsApp, while urban residents use LinkedIn, Snapchat, Instagram and Twitter.

It attributed this to the less developed technological infrastructure in rural areas that prevents the use of high resource-demanding platforms like Snapchat and Instagram.

The study added that the use of Facebook, WhatsApp and YouTube in rural areas could be attributed to free complementary services offered by telecommunication providers.

The report draws from a nationwide survey of social media consumption patterns among different demographic segments conducted between December 2018 and March 2019. It sampled 3,269 respondents aged 14 to 55.

By Pauline Muindi | 20 hours ago