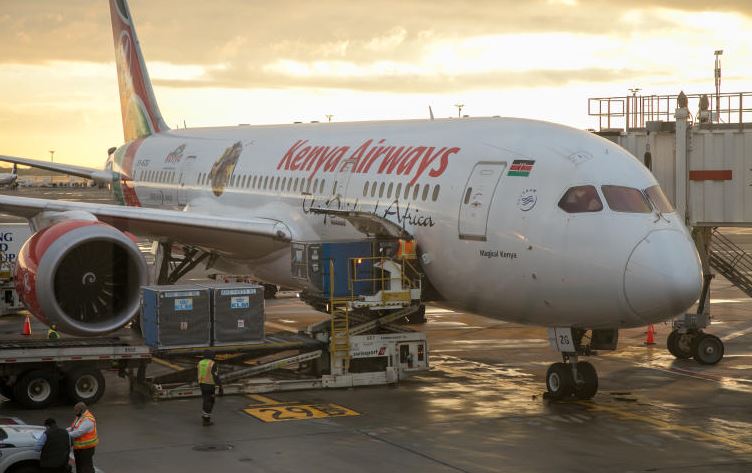 President Uhuru Kenyatta’s plan to secure the loss-making Kenya Airways through a proposed legislation in the National Assembly is already facing opposition from sector players.

Industry players, who have engaged the Transport Committee, have warned that the planned merger of KQ (above) with profit-making Kenya Airports Authority (KAA) as subsidiaries to a holding company is a ‘suicide mission.’

In the plan, KQ and KAA would merge to form Kenya Aviation Corporation (KAC).

Industry players have poked holes in the contentious National Aviation Management Bill, 2020, that seeks to make KQ a parastatal.

The Bill, which is up for public participation, also proposes the formation of an Aviation Investment Corporation, which will own aviation schools, offer maintenance and repair services, flight catering and other ancillary services. It will have an initial share capital of Sh1 million.

The President seeks to grow earnings from the sector to Sh200 billion and double passenger numbers to eight million in five years. He is proposed to chair the powerful National Civil Aviation Council.

Critics question why the composition of the council is structured in almost a similar manner as the National Security Council with the President as the chairperson with membership that includes the Attorney General and Kenya Air Force Commander.

Taking into account the fact that KQ is facing turbulence, recording losses over the years despite more than Sh100 billion government bailouts, the situation has been complicated further by the impact of the Covid-19 pandemic.

“The proposed merger is about the balance sheet. It’s to offset KQ loans. Why kill two institutions, the bailout can be done without drawing resources from KAA kitty,” warned a legislator.

The corporation – known as the group - will be run by a chief executive officer and its initial capital is proposed to be Sh7.5 billion.

Likewise, KAA’s initial capital is set at Sh66 billion while that of the Investment Corporation – a special purpose vehicle - will be Sh1 million divided into 50,000 ordinary shares.

Critics have faulted the move, questioning how an operator and regulator can be merged, as this will compromise the aviation sector and change the stakes for key stakeholders, including a consortium of local banks and sky team partners, Royal Dutch Airlines and Air France.

Pilots had opposed the move citing skies safety and standards and being in breach of aviation protocols which go against international best practice. Ironically, KAA which was opposed to it, backtracked.

Transport Cabinet Secretary James Macharia early this year told MPs that the government would consider offsetting what the airline owes several banks before making it a public company.

Macharia told MPs to look at the bigger picture and see KQ as a national entity that flies the country’s flag abroad.

“If you view Kenya Airways as just another corporate you lose the point. This is a company that carries our national flag. KQ is our country ... it goes beyond the balance sheet which most people look at,” he said.

The Cabinet secretaries for Transport, Interior, National Treasury as well as the Attorney General Kariuki Kihara and the Kenya Air Force Commander, are the proposed members of the council.

The AG is reported to have opposed its drafting. Efforts to get response from the AG did not yield fruits as his communication team promised to get back but did not by time of going to the press.

“The AG declined to draft the Bill as he was not comfortable with the content. It was drafted by a senior official within the Presidency. This directly points to a foul play if the official government advisory didn’t take part,” disclosed a senior government official.

“This is a national matter. World all over, governments privatise entities. It’s absurd that the government wants to nationalise a private entity, which is making losses and use another entity making profits to shoulder the financial stress.”

A document by aviation experts obtained by Sunday Standard questions the inclusion of the AG and Air Force Commander in the council. Also, it says, the Bill does not repeal or amend provisions of the Civil Aviation Act, 2013, which establishes the Kenya Civil Aviation Authority.

“We note that the composition of the council is structured in almost a similar manner as the National Security Council with the President as the chairperson. We may seek further clarification on the need for the establishment of the same and the high level representation that includes the Attorney General and the Kenya Air Force Commander,” observes the document.

The President will appoint the board chairperson of the proposed corporation.

The AG is also proposed alongside the CSs National Treasury and Transport, corporation CEO, managing directors of KQ and KAA and four independent non-executive appointees of the Transport CS, to be members of the corporation board.

KQ is funded by a consortium of banks holding shares as KQ Lenders Company, entities which charge the airline 11 per cent interest in dollars.

The banks hold 38.1 per cent shares in the company. The government has 48 per cent, Dutch airline KLM 7.8 per cent, minority shareholders 2.8 per cent, and KQ employees 2.4 per cent.

If the Bill passes as it is, the Kenya Airports Authority Act will be repealed, meaning KAA and KQ board members’ terms will lapse.

The aviation holding company has been exempt from certain laws that tied it down due to bureaucracy that many State-owned entities have to grapple with.

Another MP argued that governments are not known to be efficient in managing institutions and when it comes to nationalisation of an airline, it should borrow lessons from Mauritius Airline.

“With the challenges the aviation sector has faced lately, this venture will sink taxpayers’ money as there will be no returns,” another official warned.

According to the Bill, which was tabled in the National Assembly last month by former Majority Leader Adan Duale, the managing directors of KQ, KAA, and Aviation Investment Corporation will report to the group CEO.

Though the Bill aims to give effect to the recommendations of the parliamentary report on the inquiry into the KQ Privately Initiated Investment Proposal to the KAA, the net effect could be to offset outstanding debts of the troubled airline.

If MPs pass the Bill, the new KQ will be wholly owned by the government after it acquires 100 per cent of the equity interest in Kenya Airways PLC.

“The registrar of companies will, on the vesting date, enter Kenya Airways into the register of companies and issue a certificate of registration noting its status as a state owned entity,” reads the Bill.

The registrar is also expected to register KAA and the Aviation Investment Corporation as freshly-created entities.

“The CEO will hold office for four years and shall be eligible for re–appointment for one further term subject to satisfactory performance,” states the Bill.

A corporation secretary will be appointed by the board to arrange the business of the board and committee meetings, but reporting to the CEO.

It also proposes the establishment of a Kenya Aviation Corporation Fund to be administered by the board, and presided over by the CEO.

The fund will receive passenger service charges, monies appropriated by Parliament, state grants and loans, donations, and surplus income earned by KQ, KAA and AIC. Kenya Airways will be a carrier of air passengers, cargo, mail, and goods in Kenya; and also undertake other businesses related to air transport. It will also acquire, hire, sell and lease aircraft.

KQ began to re-open domestic flights on July 15, with strict measures to ensure that the spread of coronavirus will not take place on passenger fligh

By Moses Omusolo | 9 hours ago