Uhuru sets aside Sh141b to avert shut down of economy 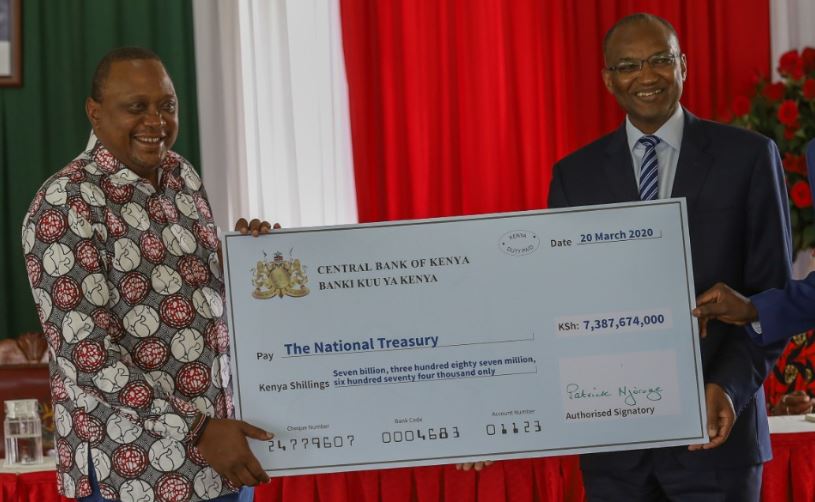 The Government has put together a Sh141 billion war-chest to handle debilitating effects of the coronavirus that threaten to shut down the economy and disrupt livelihoods.

The Cabinet also came up with a raft of measures that will see the Central Bank of Kenya release Sh7.4 billion that was rendered worthless after their holders failed to beat the September 30, 2019 deadline to exchange them with new Sh1,000 notes.

In addition, the State promised to clear pending bills and value-added tax (VAT) refunds in the next 30 days in what is aimed at injecting cash into an increasingly moribund economy that has started experiencing job-cuts and waning consumer and investor confidence.

Last year in November, the Kenya Revenue Authority (KRA) in a joint communique with the Kenya Private Sector Alliance (KEPSA) said it had a team to facilitate the clearance of 6,000 VAT refund cases worth Sh27.6 billion that were outstanding as at October 31, 2019, by April this year.

However, the Government has resolved to have the refunds paid earlier as it moves to boost businesses with critical cash flow.

A report from the National Treasury also shows ministries, departments and agencies (MDAs) need to clear Sh47.3 billion which is its outstanding pending bills to suppliers while counties owe suppliers Sh58.1 billion.

In addition, President Uhuru Kenyatta during a meeting at State House with Central Bank of Kenya Governor Patrick Njoroge and representatives of the private sector announced a further Sh1 billion allocation by the Government for hiring of more health workers needed to boost capacity to deal with coronavirus.

About seven Kenyans have been confirmed to have been infected with Covid-19. Globally, there were 254,801 as at end of yesterday, out of which 10,447 have succumbed to the deadly virus.

"That money goes to help our health facilities and our health workers," said the President.

“Critically, we all recognise that the volume of business has gone down. We need to ensure that we have cash flow to keep ourselves afloat as we go through these trying times,” the President said.

The pending bills include those which have been unverified, and it was not immediately clear if the Government would clear all of it or just the validated ones.

For national Government, the verified pending bills that had not been paid as at December 23, 2019 was 4.2 billion while that of counties was Sh22.7 billion.

This comes at a time when Health Cabinet Secretary Mutahi Kagwe announced yet new stringent measures, including requiring pubs, night clubs and other entertainment joints to close by 7.30pm.

Matatus and other public service vehicles are also required to thoroughly disinfect their vehicles and not to carry over 60 per cent of its capacity.

These new measures are likely to add to the economic pressure that has seen businesses go without business as Kenyans stay indoors following a directive to avoid crowded places and keep a certain social distance.

The bail-out might appear underwhelming to some people, who don’t see the Government’s own initiative, given that most of the money was somehow owed to Kenyans.

The Sh7.4 billion released by CBK technically belongs to Kenyans, some of whom might have been locked out of the banks by reasons beyond their control.

Njoroge said the money was gained from the mop-up of the old Sh1,000 banknotes.

“As you recall in September last year we concluded the demonetisation of our currency relating to our old generation one thousand bank notes. That matter was concluded and as a result of that, Sh7.4 billion worth of bank notes never came back to the system," he said.

"That money would have been held by people who, for whatever reason, did not want to subject themselves to the checks that were in place. So most likely this was money that might have been illicitly acquired through the various channels that we have talked about in other forums,” he added.

The Governor said the bank was giving back to the money to boost the government’s efforts to combat the Coronavirus pandemic.

With the national government struggling to balance its books, most of the heavy lifting has been done by CBK. For example, among other measures that have been put in place by the financial regulator include an arrangement that will see customers engage with their banks to extend their loan repayment for at least one year.

Fees for mobile money transactions of Sh1,000 and below have also been waived in what is aimed at promoting a cashless economy critical for preventing contraction of the disease by touching money.

The financial regulator has also said that it will hold onto cash coming from banks for a week to avoid passing the virus to people handling money.

The President said the Government had lifted a ban on its entities from holding conferences and seminars in private hotels so as to keep the hospitality sector vibrant.

Hospitality industry has been hardest hit by this pandemic with countries in Europe and North America where most of the tourists that visit the Kenyan hotels being put under lockdown.

“As you are well aware we had put a ban on government officials holding meetings in hotels and said only government institutions are the ones to host various seminars by government. Again we have lifted that temporarily until this is over so that our hotel beds get occupancy and you in turn are able to keep your workers employed,” said the President.

Kenya Association of Travel Agents CEO Agnes Mucuha said the industry is currently witnessing shutdown due to the highly contagious virus that has slowed down the economy worldwide.

“We are witnessing the shutdown of the travel industry. The economic effects are getting worse by the day and could become more permanent if the government does not act now,” said Mucuha.

She explained that the industry recorded a decline in passenger number bookings of 30 per cent, followed by a drastic cancellation of flight bookings, conferences and events resulting in a revenue loss to the sector of 85 per cent.

Over 90 per cent of forward bookings for the month of April,  said Mucuha, have also been cancelled since Europe, America and the Middle East issued lockdown notices for non-citizens.

The Government also announced the release of 400,000 litres of ethanol, impounded by the multi-agency team on contraband goods, to oil companies for the blending of hand sanitisers to be distributed free of charge to the public. There has been a surge in the demand of sanitisers and masks which has in turn pushed up their prices.

On its part, the private sector, through the Kenya Private Sector Alliance Chairman Nick Nesbitt and CEO Carole Kariuki, committed to continue protecting Kenyan employees against job losses and safeguarding SMEs from the adverse effects the current crisis by ensuring business and supply chain continuity.

World Bank seeks review of Kenya healthcare financing
Business
By Graham Kajilwa
22 hours ago
Elections should not cause unease, economic uncertainty
Opinion
By Tobias Alando
22 hours ago
Interact and socialise beyond work; you need it
Business
By Peter Theuri
22 hours ago
The treasury is broke to sustain the Sh100 unga subsidy, says Munya
Business
By Mike Kihaki
1 day ago
Premium How to make money from video games
Sci & Tech
By Boniface Mithika
1 day ago
.

By Peter Theuri 22 hours ago
Business
Interact and socialise beyond work; you need it