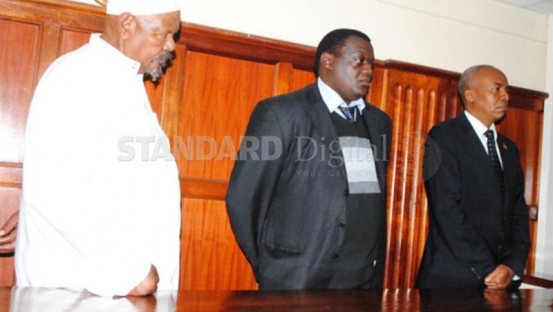 NAIROBI, KENYA: Former transport Cabinet Secretary Michael Kamau got a reprieve after the Court of Appeal stopped his trial over allegations of abuse of office.

Appellate Judges Milton Makhandia, William Ouko and Kathurima M'inoti ruled that the criminal proceedings against Kamau pending before the anti-corruption court be put on hold until June 23 when they will give a ruling on the case.

The former CS is appealing against a High Court decision which ordered him to continue with the trial despite claims that the Ethics and Anti-Corruption Commission was not properly constituted to investigate and recommend charges against him.

Kamau was charged with two counts of abuse of office and wilful failure to comply with applicable procedures and guidelines relating to management of public funds.

The offences were allegedly committed between 2007 and 2008 when he served as the permanent secretary in the ministry of roads and public works.

He allegedly failed to comply with the rules by ignoring the design of Kamukuywa-Kaptama-Kapsokwony-Sirisia Road done by Engiconsult Limited at a cost of Sh33,303,600 and entering into a memorandum under which the resident engineer redesigned the same road without due process.

The particulars of the second charge were that he abused his authority by causing the road to be redesigned without involving experts.

He had challenged the charges at the High Court but the case was dismissed, prompting him to appeal.
The former CS is questioning the legality of EACC to recommend his prosecution in the absence of commissioners and whether President Uhuru Kenyatta's directive to the commission to act on grand corruption constituted an undue influence from the executive.

According to his lawyers, the EACC is an independent commission not subject to any direction and by acting on the president's directives, the decisions they made to prosecute were null and void.

He is also contesting composition of the EACC at the time he was charged, with arguments that the secretariat had no authority to recommend any charges in the absence of commissioners since the law provides that the commission can legally execute its duties if it has at least three commissioners.

"The constitution is very clear that EACC can only be properly constituted to perform its duties with at least three commissioners. Any decision made without commissioners is null and void," he said.

He accused the EACC of acting in bad faith, adding that the manner in which they stormed his house with over 20 armed police officers to arrest him at a time when he was mourning the death of his mother was malicious.

How corruption limits our spiritual sphere