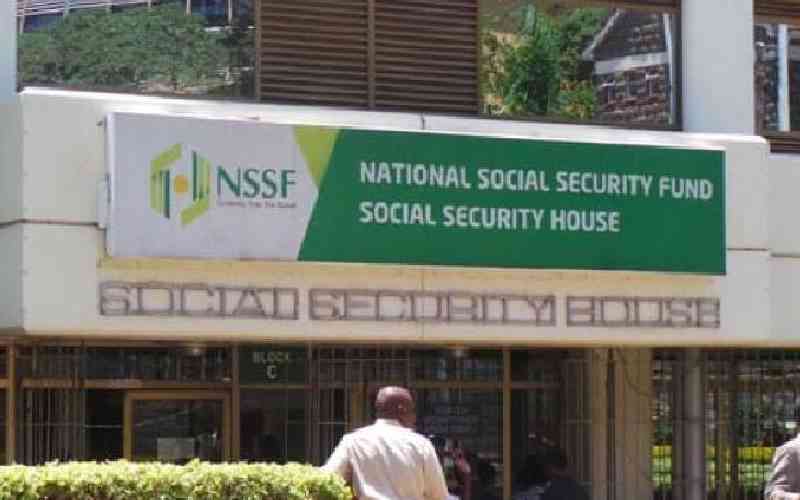 The Auditor General has termed as "irregular" the high costs of running the National Social Security Fund (NSSF) which ballooned by nearly a billion shillings in the year to June 2021.

In a report published on Thursday, Auditor General Nancy Gathungu said that the State-owned pension fund broke the law by breaching the legally set limit for internal costs.

Standard Business recently reported the breach which showed that NSSF’s expenses jumped 17.8 per cent or the equivalent of Sh961 million to Sh6.36 billion in the period against Sh5.4 billion in 2020.

The expenses of administering the Fund breached the NSSF Act 2013 which caps the costs at no more than 1.5 per cent of its asset value.

"Failure by management to contain the expenses at 1.5 per cent or below of the fund's assets ... is therefore irregular," said Ms Gathungu in the report dated July 20.

NSSF's asset value grew by 13.8 per cent to Sh284.5 billion in the period under review, meaning its operating expenses shouldn’t have exceeded Sh4.27 billion.

This is as contributions dropped by 1.77 per cent to Sh14.4 billion down from Sh14.7 billion a year earlier.

"The rise in running cost was due to the crystallising of contingent liabilities through court decrees from historical suits and claims," he said. He did not provide absolute figures for the legal fees.

Contingent liabilities are obligations that may be incurred by an entity depending on the outcome of an uncertain future event such as a court case.

The rise in the costs reduced the amount of cash available for investments and dimmed retirees’ returns, which have recently not kept pace with inflation.

Dr Omerikwa blamed the economic fallout from the Covid-19 pandemic for the drop in pension contributions which fell by Sh260 million. He added that contributions are set to breach the previous year's mark as the economy recovers from the pandemic.

NSSF has been under pressure to improve the management and transparency in the use of its funds from unions and contributors before it can ask members to raise their monthly contributions, pegged at Sh200 for all members.

The High Court last week stopped the bid to increase monthly contributions to the State-owned fund by up to Sh2,068 after declaring the law supporting the increments as unconstitutional.

Next article
Hit by cash crunch, counties seek to diversify own revenue sources