EABL warns of job scammers on the prowl 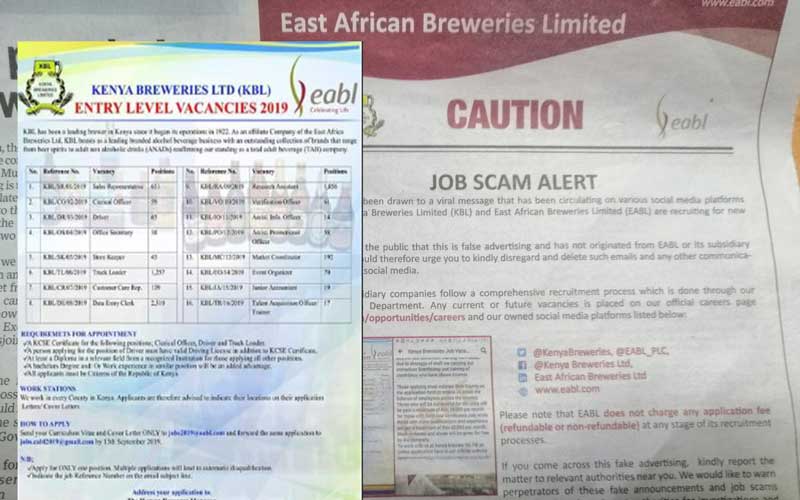 East African Breweries Limited has issued an alert over a scam involving cons preying on unsuspecting job seekers. Adverts, which have been widely circulated on social media claimed the company was hiring entry-level staff. In one of such adverts seen by Standard Digital, applicants were asked to send their application letters to [email protected] and forward the same applications to [email protected].

The use of emails not tied to a company’s domain has been one of the easiest ways to spot fake advertisements. The not-so-smart cons who have allegedly been fleecing unsuspecting job seekers of money misspelt the company name as ‘East Africa Breweries’ rather than ‘East African Breweries’. “Those applying must indicate their county on the application form to enable us to attain the balance of employees across the country,” another viral but fake ad read. It went on: “Those who will be successful for the jobs will be paid a minimum of Sh26,000 per month for those with form four certificates only while those with more qualification and experience will get a maximum of Sh42,000 per month.” However, the company has denied authoring those advertisements saying they did not originate from EABL or its subsidiary companies.

“We would, therefore, urge you to kindly disregard and delete such emails and any other communication circulating via social media,” EABL said in an advertisement on the Standard newspaper. It added that EABL and it's subsidiary companies followed a comprehensive recruitment process which was done through its human resources department. “Any current or future vacancies are placed on our official careers page www.eabl.com/en/opportunities/careers and our owned social media platforms,” EABL noted. The breweries added that it did not charge an application fee during the recruitment process and had started the process to pursue the cons. “If you come across this fake advertising, kindly report to the matter to relevant authorities near you... the matter has been reported to the relevant authorities for investigations and perpetrators will be prosecuted,” EABL said.

A look at the link provided by the company showed that there were no available opportunities at the time of writing this article.