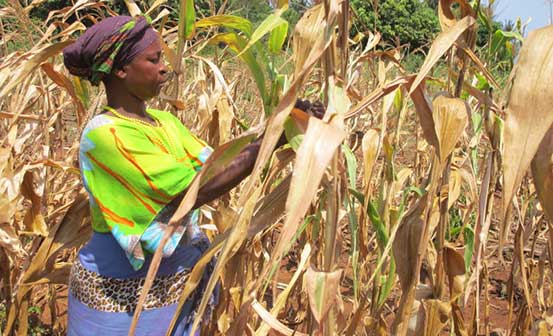 Treasury has cut the agriculture budget by Sh4.9 billion, dealing a big blow to the country’s efforts to combat food insecurity.

In its latest Supplementary Budget Estimates, the National Treasury targeted in its cost-cutting measures the Crop Development and Management and Food Security Initiatives. It sliced Sh3.9 billion from crop development and management, while food security initiatives such as irrigation lost Sh2 billion.

The latest rationalisation measures by Treasury go against the Government’s objective to ensure food security and eliminate hunger and poverty. In his budget speech to Parliament in June, National Treasury Cabinet Secretary Henry Rotich said the Government would allocate Sh20.5 billion on on-going irrigation projects country-wide as the Jubilee administration moved to ensure food security for all Kenyans.

Mr Rotich set aside Sh4.9 billion to subsidise fertilisers and seeds while the Strategic Grain Reserve benefited from Sh1.6 billion kitty. Speaking during the official opening of African Green Revolution Forum (AGRF) at the United Nations Headquarters in Nairobi, President Uhuru Kenyatta underlined the importance of agriculture in dealing with the twin challenges of poverty and youth unemployment.

“We are aware that growth in agriculture is up to 11 times more effective at reducing poverty than growth in any other sector,” said Mr Kenyatta. However, in its revised budget estimates, Treasury seems to have beaten an about-turn on these initiatives.

An agricultural expert at Tegemeo Institute, Dr Dennis Otieno, thinks the Government has not really prioritised the agricultural sector. “If the budget allocation has been reduced, most likely they are not taking it as a strategic thing,” said Dr Otieno.

“Because even after the Maputo Declaration, we are supposed to allocate about 10 per cent of the budget to agriculture but Kenya was doing around five per cent which was rather low,” added Otieno who noted that reduction means Treasury is not really keen on complying with the Maputo target.

Indeed, this week, the Ministry of Agriculture in conjunction with the African Union and New Partnership for Africa’s Development (NEPAD) launched the National Agriculture Investment Plan (NIP) which is aimed at increasing annual public expenditure to agriculture to at least 10 per cent of the total budgetary allocation. This is in accordance with the 2014 Malabo Declaration by the African Heads of State.

In 2014, African Heads of State, including President Uhuru Kenyatta, in addition to committing to increase budgetary allocation to agriculture to 10 per cent of their total budget, they also promised to support private investment and fast-track the establishment of the African Investment Bank.

In the supplementary budget, Treasury slashed funding for irrigation by Sh6.8 billion and postponed irrigation of one project and scaled down another. The Government had planned to irrigate phase II of Lower Nyanza Irrigation Project that would have covered 450 acres. This has been put off for now.

In addition, work on the Mwea irrigation project has been scaled down. Some 1,500 acres will be sacrificed. In the current financial year, the new estimates show that just 1,000 acres will be done. In the 2016/17 budget, Rotich announced that the Government was putting much emphasis on agriculture so as to make the country food secure.

To this end, he allocated Sh20.8 billion to the ongoing irrigation programmes, including the Galana-Kulalu, which was supposed to be scaled up from the current 10,000 acres to 100,000 acres. He also allocated Sh4.9 billion to subsidise fertiliser and seeds and another Sh1.6 billion for the Strategic Grain Reserves. There was also some money for the revival of pyrethrum sector.

An expert at the Ministry of Agriculture, whose identity we cannot reveal as he is not allowed to speak to the media, regretted the reduction in funds allocated to the National Irrigation Board but also questioned its capacity to absorb the funds. “There are issues of absorption capacity and pilferage in these departments,” said the expert.

“There has also been a lot of pilferage in some of these departments. The Government is thus thinking: ‘why would I give this money to an institution that is not even ready to spend the money?"

This is not the first time the Government is taking money from the State Department for Agriculture. In March this year, Treasury took away Sh11 billion from the department as reality sunk that the Government was going to miss revenue collection targets.

By Njuguna Ndung’u and Théophile T. Azomahou 10 hours ago
Financial Standard
African economies: How to respond to rising global crises