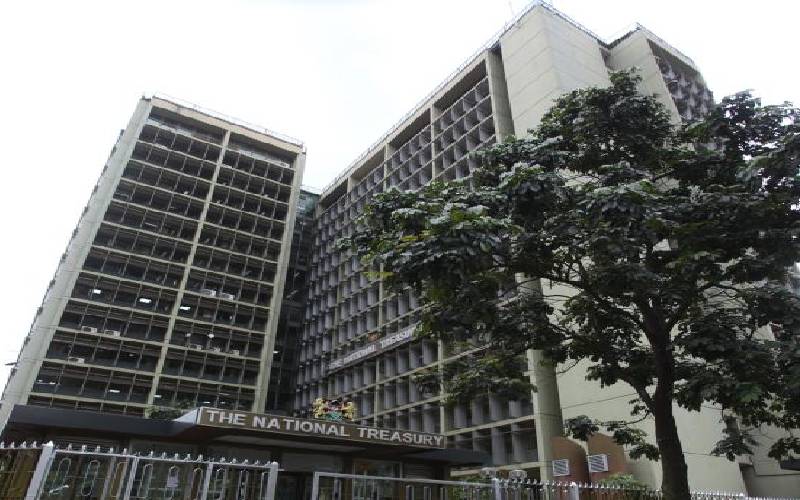 The government has borrowed a record Sh560 billion in six months.

This brings the total public debt to Sh7.3 trillion by November last year.

This was Sh32 billion more than what it earned in taxes, with the Kenya Revenue Authority (KRA) collecting Sh527.8 billion from taxpayers between July and November 2020.

Latest data from the Central Bank of Kenya (CBK) shows that Kenya’s total debt has surged from Sh6.7 trillion in June as the government plunges into debt market to finance an expansive budget and help stimulate the economy.

If we add all the loans that have been committed, the country’s total debt jumps to Sh8.4 trillion, just Sh600 billion shy of the Sh9 trillion legal ceiling.

But this debt-ceiling could be crashed should the National Treasury include non-guaranteed loans as well as county loans in the computation of public debt.

In two months - October and November - Treasury borrowed an additional Sh133 billion. A big chunk of the additional loans were external with the stock of foreign loans jumping by Sh108.3 billion between September and November.

This is as the government chalks up debt to fill a yawning budget hole that has been left by dwindling tax revenues.

The external debt now stands at Sh3.8 trillion as at November 2020, with a large fraction of the loans owed by commercial banks and bond-holders.

China also holds a sizeable chunk of the country’s foreign loans, having advanced to Kenya about Sh736 billion to build roads, railways, ports and other infrastructure.

The government has projected a budget deficit of Sh1 trillion in the financial year 2020/21, which will be plugged through net external financing of Sh401.8 billion and net domestic borrowing of Sh600 billion.

These lenders have advanced the country money to help it address the adverse effects of the Covid-19 pandemic. National Treasury still expects a loan of Sh150 billion from the World Bank, even as it seeks another Sh230 billion from the IMF.

Unless much of the borrowed cash is used to refinance some loans falling due, these new loans will push net external financing beyond the approved Sh401.8 billion.

To remedy this, Treasury is likely to come up with a mini-budget, asking the National Assembly to push up the limit for external borrowing.

The Exchequer has already received domestic loans of Sh304.8 billion by issuing government papers through CBK.

“This together with committed undisbursed debt of Sh1.35 trillion translates to a stock of public debt of Sh8.41 trillion against a ceiling of Sh9 trillion, which implies limited space for additional borrowing,” Treasury said in the paper that was released towards the end of last year.

Assuming a projected Gross Domestic Product (GDP) of Sh11 trillion, the additional loans push the debt-to-GDP ratio to 76 per cent, which is close to, or over, the 70 per cent threshold for low middle-income countries such as Kenya when adjusted for prevailing mitigating terms such as interest.

“The accumulation of public and public-guaranteed debt and the challenges of servicing it is now recognised as a major constraint to rapid growth in the country,” explained the Treasury.

In the current financial year ending June 2021, Treasury will pay Sh904.7 billion to both domestic and external creditors, almost half of the government revenue, leaving it with little to spend on vital services such as healthcare at a time when the country is battling a pandemic.

Treasury, seemingly jolted by the imminent financial crisis, will be requesting for debt moratorium or cancellations going forward.

It joins tens of thousands of its citizens who have sought to have their loans rescheduled due to the pandemic.

It has already received a six-month debt service suspension from 10 countries under the Paris Club, a move that will see it free up Sh32.9 billion.

It is also pushing for debt repayment holiday from China, its largest bilateral lender.

The debt restructuring is aimed at giving the country some breathing space in its repayment schedule as it grapples with low tax revenues due to a volatile business environment that has seen the taxman miss its targets.

“This will ease fiscal pressure from expensive external commercial debt servicing and decrease issuance of shorter-dated domestic government paper to reduce refinancing risk and the public debt burden,” Treasury said in the report.

Poor revenue collection has seen the Treasury fall behind by two months in disbursing money to counties.

Previous article
When should you be worried about delayed milestones?
Next article
Firms get two-thirds of Naivasha port space