Why the outrage over a fake doctor when quacks run Kenya? 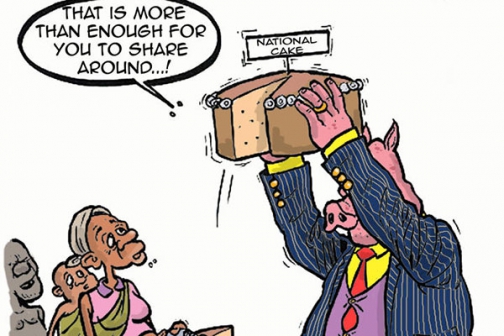 We have said it here that being a Kenyan is an overrated experience. Those telling you otherwise will most likely be trying to get you to vote for them. In the midst of unearthing mega scams, quackery of unprecedented proportions has been brought to light.

If we keep going at this rate, the health sector might be declared unfit before the next general election. However, among the small mercies that we are thanking providence for is the fact that we are yet to discover the last straw that will finally break the back of the medical profession in this country.

News that a fake doctor has been delivering babies through caesarian section only sounded like horror to those who do not have their ears close to the ground. As for the rest of us, nothing puzzles us anymore. Especially after watching a sextape involving another quack and a sedated pregnant mother.

And the horrors do not stop there, as those of our leaders who are not raping other peoples' wives are busy violating the economy. That is why we laugh every time a mzungu insists hakuna matata.

It may be our way of reacting to mockery. Or perhaps we are encouraging them to extend the same greeting to mburukenges in Maasai Mara. Maybe it is in our shady nature to conceal real issues affecting us. Bottomline, if the litmus test was applied to the national fabric, the flag might just display a rainbow. The sunrise in the background would be our everlasting hope of the elusive new beginning.

With elections round the corner, there is usually euphoria of a new dawn. How quacks overturn our hope into despair as they take up leadership is a mystery that warrants urgent research. Otherwise, the vicious cycle will continue to haunt our future.

Chastity and the national cake might have failed to devolve, but the same cannot be said of corruption and maleficence. Crooks in the national government are inspiring criminals mashinani to loot the public. What that means is that Kenyans are being looted back and forth, making them feel as though they are surrounded. A gang that surrounds seeks to overwhelm.

So you will understand why we were sold a Sh2,000 wheelbarrow at a hundred thousand shillings and a revolution does not happen. A hospital gate costs more than the entire infrastructure in the institution and patients do not stage an uprising. Counties are hemorrhaging money faster than you can say gavana.

One can only hope that as we go through the motions of democratically electing leaders, sanity ensues no matter the trash we recycle. Quacks have been operating in this country, as they enjoy their bill of rights as enshrined in the constitution. What we hope for is some kind of reprieve. Especially from those agencies which profit from instigating panic in the form of news.

Babies have been delivered in Kenya under zero supervision with hardly any complications in the refreshing shade of a banana tree. Some of the most prominent personalities in this country were delivered in clinics run by village witch doctors. If some phony with some medical background assisted in ushering in a negligible percentage of the next generation of Kenyans, it shouldn’t cause a furor. The guy might even have a success rate higher than some gynecologists.

Not when thugs who have looted the future of the unborn are roaming free.

Let’s not write off Facebook, some established authors made their names on it

When I received my copy of last week’s The Standard on Saturday from my vendor, I quickly flipped through its pages to my usual safe haven, Arts and Culture.