By Ngugi wa Thiong’o | 9mos ago

The best gift that I have received in recent years has come from digital publishing.

Last year, the indefatigable team of writers and translators at Jalada, an online collective have had my Gikuyu fable, Itiuka Ria Murungaru (The Upright Revolution), translated into 100 languages, making the short story one of the most translated pieces in the world.

About 60 per cent of those translations are in African languages, which affirms the possibility of a pan-African market for creative outputs from the continent. A story written in Gikuyu is now available in Afrikaans and XiTsonga in South Africa, Setswana in Botswana, Lingala in DRC, Shona and isiNdebele in Zimbabwe, Kiembu and Kipsigis and Luo in Kenya; Fombina, Igbo and Igala in Nigeria, and Tamazight in Algeria.

Thus the story crossed the oceans, gaining life in Bangla and Punjabi in India and Pakistan, ultimately reaching the Caribbean through Belize Kriol in Trinidad and Tobago. A story originating in an African language has reached the globe.

This is an unprecedented fete that attests to the power of social media and digital publishing. Operating on shoe-string budgets and dozens of volunteers, Jalada editors, led by Munyao Kilolo, appeared to achieve these successes almost effortlessly, facilitating the dissemination of African literature across the continent and beyond.

But the same digital platform can also hurt. It once pronounced my death. And recently Kenyans and the rest of the world have been met with the spectre of another online smear campaign meant to desecrate 60 years of my struggle in making Kenya and Africa a more just society.

Through malicious manipulation of my images - which are widely available online - these agents of divide and rule have put out messages on social media that insinuate that I support parochial political interests and ethnic chauvinism.

Those who are familiar with my work will share in my outrage that my complex analysis of society, culture and politics is being reduced to a political slogan that’s calculated at deception  - just the sort of artifice that I expose in my many fictions.

Let’s depart from fake news and state a few facts: only two tribes exist in Kenya: the haves and the have-nots. I have always called for the empowerment of the have-nots, from the ocean, through the highlands and the plains to the lakes. It is as simple as that.

It seems fortuitous, therefore, that Ngaahika Ndeenda or I will Marry When I Want, the play that highlights my artistic commitment to Kenya’s linguistic, cultural and economic emancipation, and which prologued my detention without trial and subsequent forced exile, opens on May 12 at the Kenya National Theatre. The play will be staged in both Gikuyu and English, directed by Stuart Nash.

The play filters my understanding of Kenya’s post-colonial condition, where greed, avarice and corruption by the political class, was taking root and it anticipates the nightmare what has become something of a national affliction.

Corruption is a cancer in our society. Whoever practices it, no matter what region of Kenya they come from, are actually anti-Kenya. They steal from their mother and brag about it.

The play’s staging in 1977 was scuttled by the government and the community theatre in Kamirithu destroyed by armed policemen. I was consigned to the Kamiti Maximum Security Prison for one year, and subsequently prohibited from returning to my job at the University of Nairobi. Jomo Kenyatta put me in state prison; Daniel arap Moi drove me out of state; and only recently did Uhuru Kenyatta receive me in State House.

This context is especially important to young Kenyans for them to know that my struggle for social and cultural emancipation of my country and continent has never been about ethnicity. It has always been about empowering the working people, the have-nots of Kenya and Africa.

It might help them to read again my novel, Devil on the Cross, or the Gikuyu original, Caitaani Mutharabaini, the novel I wrote in prison in 1977 and which denounced national robbers and thieves in league with the international robbers whose headquarters was then New York.

It was a satire but alas, what I thought was an exaggeration, is no longer a matter of laughter for a continent that continues to develop the West in exchange for good accents.

Accents for Access: that is still the problem of Kenya and Africa, and that is the song I will keep on singing. Africa, please give back the West their accents; take back control of access to the resources of the continent, make things with them and exchange them with other nations on the basis of equal give and take. Let us become a continent of makers of things. 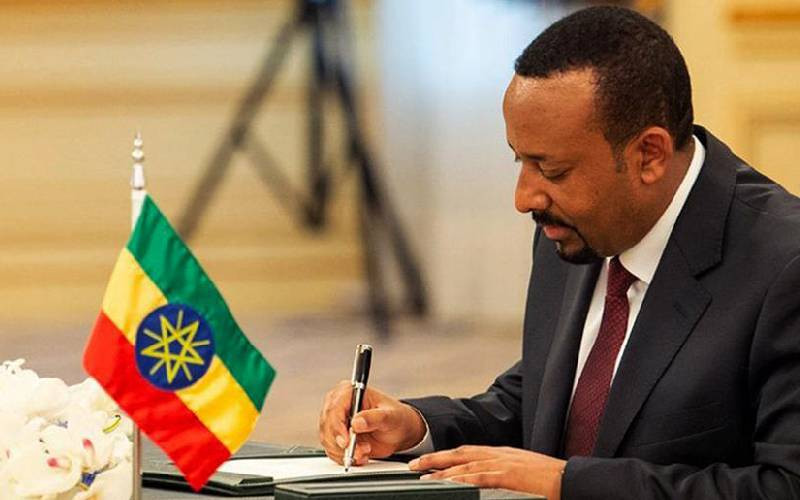 Ethiopia PM holds first meeting with Tigray leaders since peace deal
Africa
By VOA
17 mins ago
Why some African marriages are a serious illusion
Opinion
By Heather Chesiyna
39 mins ago
Premium Fredrick Leliman: How ex-cop planned and executed heinous murder
National
By Kamau Muthoni
1 hr ago
Premium The land of meat and honey: How Koriema grew into a vibrant town
Rift Valley
By Yvonne Chepkwony
1 hr ago
.