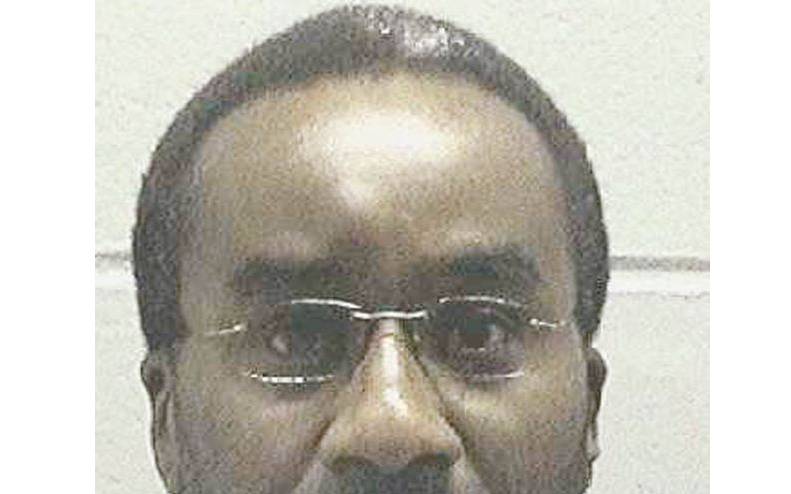 Death row inmate Ray "Jeff" Cromartie (above) has been executed for gunning down a shop owner during a robbery.

Cromartie, 52, had always admitted he and his co-defendant Corey Clark were guilty of the raid but claimed neither he or his pal knew who pulled the trigger to shoot Richard Slysz in Georgia, USA, in 1994.

Cromartie was originally scheduled to die on October 30 but his execution was delayed as an appeal was still pending with Georgia's Supreme Court.

However, his argument was dismissed and he died by lethal injection at 10.59 pm local time in Georgia Diagnostic Prison today.

He declined to make a final statement.

His last meal - the second he has had - consisted of macaroni and cheese, steak, rice and gravy, a steak and cheese sandwich, a double cheeseburger, French fries, a side of ranch dressing, a strawberry milkshake and layered cake with white icing.

He had a previous last meal in October before his execution was delayed.

Mr Slysz, 50, was murdered at Junior Food Store in Thomasville, near the Florida border.

But Clark and getaway driver, Thad Lucas, were both cleared of murder charges.

They were imprisoned for the roles in the heist but released in the early 2000s.

Speaking previously after Cromartie made his appeal, Melven Johnson, of the Thomasville Police Department, said: "A jury has found him guilty and sentenced him to death.

"I think to give these families and this victim some satisfaction and let them get this off their minds, it needs to happen."

In April 1994, Cromartie borrowed a gun from his cousin and went to the Madison Street Deli in Thomasville and shot and wounded store clerk, Dan Wilson, in the face, court papers said.

When they entered the store, Cromartie shot Mr Slysz twice in the head, killing him, prosecutors said.

The two criminals then tried to open the cash register but were unsuccessful.

Cromartie took two 12-packs of Budweiser beer and the men fled, according to court papers.

He is the third person to be executed in Georgia this year.

By Winfrey Owino and Agencies | 3 hours ago

Russia bans over 900 Americans from visiting