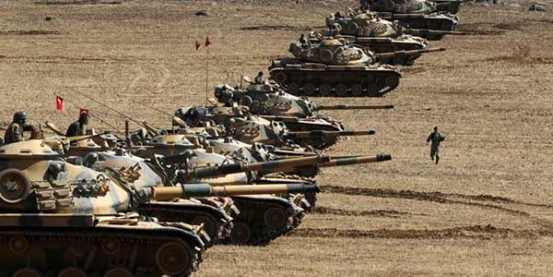 Ankara: Turkey has moved 20 tanks to her border with Syria as tensions with Russia continue.

Military sources from Turkey said the tanks were moved by rail to an armored brigade at the western border with Syria.

Reports also say 18 fighter jets were sent on a patrol exercise near the border.

A military source told Turkey’s Anadolu agency: "Accompanied by police and gendarmes, 20 tanks were sent by rail from Turkey’s western provinces by railway to Gaziantep in the south of the country, and then redirected to the Syrian border."

Turkey shot down a Russian fighter jet on Tuesday morning close to the Syrian border leading to a crisis between the two countries.

Russia yesterday started bombing Syrian rebels in the area close to where its fighter jets was shot down.

Missiles have been fired from Russian warships in the Mediterranean and fighters jets have also been launching raids in Syria's Latakia province.

A Turkmen commander said missiles fired from Russian warships in the Mediterranean were also hitting the area, as well as heavy artillery shelling.

It comes one day after a Russian warplane was shot down by Turkey causing a crisis between the two countries.

Vladimir Putin announced today he was sending an air defence system to Syria and a warship to the Mediterranean.

It will be taken to a Russian air base in Syria's Latakia province.

It also emerged today that Putin is deploying a warship to the Mediterranean.

The furious Russian president has broken off military contact with Turkey and dispatched the warship.

Russia says it will destroy “any targets representing a potential danger” to its military working in Syria.

As reported by the Daily Mail, Russian bombers will now also be escorted by jets while carrying out raids in Syria.

Pavel Felgenhauer, a Russian military analysts , said war with Turkey was 'most likely'.

In a tense escalation of the Middle East crisis, Putin warned Turkey – a key member of Nato and ally of Britain – of “significant consequences” .

At least one pilot is believed to have been killed near the Syrian border by rebels as the airmen parachuted from the blazing jet.

Another Russian soldier was reported dead after Syrian rebels blew up a search-and-rescue helicopter sent by Putin to find the missing pilots.

Turkey insisted the Russian SU-24 M had flown into its air space and was warned 10 times in five minutes before finally being shot down – claims furiously denied by the Russians.

David Cameron begged the two sides to start talks to contain the crisis.

President Putin said: “The loss today is a stab in the back, carried out by the accomplices of terrorists. I can’t describe it in any other way.

“Our aircraft was downed over the territory of Syria, using air-to-air missile from a Turkish F-16. It fell on the Syrian territory 4km from Turkey.

“Neither our pilots nor our jet threatened the territory of Turkey. Today’s tragic event will have significant consequences for Russia-Turkish relations.”

The incident is a disaster for Western leaders trying to bring Putin on side in the war on Islamic State.

David Cameron held talks with him only last week and praised Putin’s raids on ISIS targets in Syria.

But the Russian President accused Britain’s ally of secretly funding ISIS by buying cheap oil and gas from areas controlled by the terror group.

ISIS is the richest terror group in history after taking control of oil wells in Iraq and Syria and making huge profits on the black market.

Experts believe ISIS is raking in £300million-a-year from oil sales smuggled out along routes established by Saddam Hussain in the 90s.

Turkey is reportedly one of the main destinations for the contraband oil. It has also been accused of tacitly supporting ISIS against Kurdish forces.

The attack was the first time a Russian jet has been shot down by a Nato plane since the Korean War in 1952 more than 60 years ago.

A leaked letter from Turkey to the UN suggested two Russian jets had strayed into its air space but one had left when requested.

And US officials said privately the downed jet had only entered for a “matter of seconds”.

Dramatic video showed the Russian pilots parachuting out of the plane before it crashed in a fireball.

The Russian Defence Ministry said one was shot dead from the ground by Syrian rebels, while another soldier died in the rescue operation,

But rebels in Syria said both pilots were killed. A deputy Syrian Turkmen commander said: “Our comrades opened fire and they died in the air.”

But a Turkish official insisted the men were still alive and that Anakara hoped to secure their safe return.

Experts have warned of Western and Russian jets coming into conflict since Putin began bombing raids against ISIS and other Syrian rebel groups two months ago.

Nato has called an emergency meeting and made clear it backs Turkey’s right to defend its air space.

That was the official position of US President Barack Obama – who welcomed French President Francois Hollande to Washington 11 days after the Paris terror attacks.

But privately diplomats were asking why Turkey did not simply escort the Russian warplane out of its airspace.

The jet was shot down over an area controlled by Turkomen tribes – ethnic Turks across the border in Syria.

And last week Turkey complained about Russian bombing raids there.

Experts privately questioned whether Turkey had now unilaterally taken matters into its own hands.

The crisis is a potential blow to Mr Cameron’s hopes of securing support from MPs to send RAF bombers into Syria next week.

But Downing Street insisted the case for attacking ISIS had not changed and the PM would not back down despite risks to British pilots.

He spoke to Turkish PM Ahmet Davutoglu yesterday, begging him to talk to Putin.

International affairs expert Keir Giles said it was not in the interests of Turkey or Russia to escalate the situation.

He said Ankara had repeatedly made clear to the Russians what the consequences would be if their aircraft violated Turkish airspace.

He said: “The rules of the game as established by Turkey in this area are rules Russia understands very well.”

Weekend at One: Syrian Refugees are facing challenges after a month long stay back in Canada

Weekend Prime: Doctor in Malindi arrested over claims he is has ties to ISIS