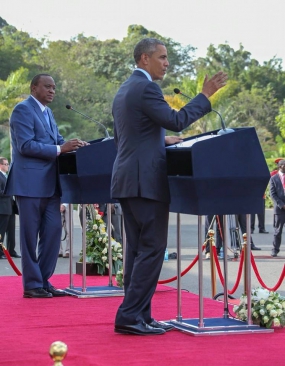 In a bravery, only likened to the three Hebrew boys before the King of Babylon; Nebuchadnezzar in the Old Testament, Kenyan President Uhuru Kenyatta did so well to ward-off pressure from US President Barack Obama on his quest to push the homosexual and gay rights agenda down African’s throat during his visit to Kenya and Ethiopia late July.

When Nebuchadnezzar said, “Is it true, Shadrach, Meshach, and Abed-Nego, that you do not serve my gods or worship the gold image which I have set up? They answered and said to the king, “O Nebuchadnezzar, we have no need to answer you in this matter (it is a non-issue)… let it be known to you, O king, that we do not serve your gods, nor will we worship the gold image which you have set up.”

These; in some way were the concealed answers of President Kenyatta to Obama not just on behalf of Kenyans but Africans and the whole world which worships the true and Living God. Homosexuality is a non-issue here in Kenya and across the African continent.

I concur with Mr. President Kenyatta that our culture and society doesn’t have room for such. It is my opinion that there is difference between human rights and human behavior and the US will help Africa a lot by supporting Africans deal with their own problems not the problems of the US. Why can we not just be helped to fight corruption, terrorism, unemployment, disease and illiteracy which are our key challenges?

Obama’s argument that Government does not need to weigh in on religious doctrine and should treat everybody equally under the law; allowing everybody else to have their opinions is disingenuous. The US Government must lead from the front by letting the people of the world have their own say on gay rights and not force it on sovereign nations.

Africans acknowledge that the West has readily accepted the fallen nature of mankind, but the fact that some dubious behaviors are now acceptable in the US doesn’t mean that they are right. Indeed the changing trends in public acceptance of homosexual practice is not and cannot rewrite the rule of nature or divine law.

While in Kenya  Obama advocated for Lesbians, Gays, Bisexual and Transgender (LGBT) rights, comparing Kenya’s policy toward gays - imprisonment to the treatment of blacks in the United States prior to the civil rights movement. “As an African American in the United States, I am painfully aware of the history of what happens when people are treated differently under the law. There were all sorts of rationalizations that were provided by the power structure for decades in the United States for segregation and they were wrong,” he said.

Question is, does Obama remember that there are rights of other people to determine the values they care about. Does Obama consider that some so-called American values are actually non-values for other peoples?  The fact that homosexuality is now legal in the States does not mean all kinds of exotic sexual adventure must be foisted on other nationalities in the name of rights. Even the false prophet; that wicked dragon and the beast otherwise called the antichrist do not thwart God’s purpose for the ages.

If USA is unable to legislate morality, Kenya and indeed all African Nations are not handicapped and should legislate morality. The USA has argued that imposing “personal, moralistic beliefs” challenges our freedom by disregarding the Constitution and the Bill of Rights. But we impose personal, moralistic beliefs all the time. Don’t we have laws against rape, gender violence, stealing, assault, murder, pedophilia, and many other immoral behaviors, and rightly so? We forcefully impose these “moralistic” beliefs on everyone in our society, even though they go against the personal beliefs of a minority. Why now change the rules of the game in favour of other deviants called the homosexuals.

God’s purpose for civil governments is to protect law-abiding citizens and punish law-breakers and it is sad that the US Government is not only doing the contrary but forcing others to follow in its error.

President Kenya spoke for most Africans who care about religious values, about the family, about the complementary nature of man and woman and the culture that makes us Africans. The US owes Africa the right to choose what ‘benevolence’ to accept from the West.

The Writer in the Communications Manager,

Bathrooms should be spaces where one not only scrubs down their body but a space that is rejuvenating with hygienic, cohesive and harmonious interiors.

Meet the dancing pallbearers who have become an online sensation

Hennessy distances itself from Sonko’s claims

WHO warns of hackers who might steal your details during Coronavirus pandemic
;
Feedback