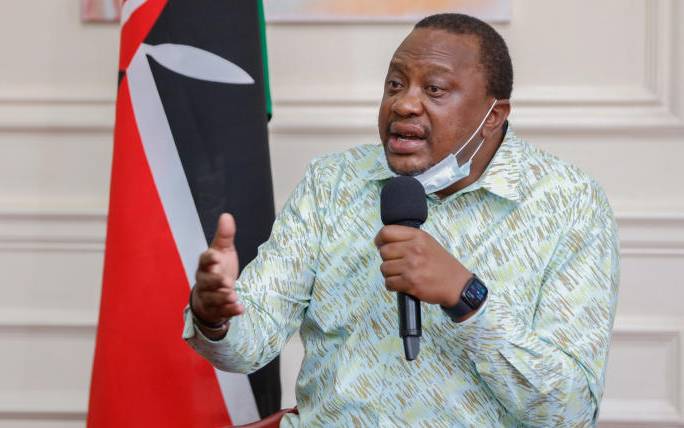 A clause in the Jubilee Party constitution suggesting President Uhuru Kenyatta (above) has powers to enter into a coalition unilaterally has ignited a fresh storm.

Rival camps have bitterly clashed over the interpretation of the provision, largely viewed as the president’s trump card in case he wants Jubilee to partner with Raila Odinga’s ODM.

Mr Kenyatta’s allies say the clause essentially allows the party leader to sidestep the hostile wing of the outfit that is allied to Deputy President William Ruto if he opts to enter a pact with other parties.

The interpretation of the party constitution by Uhuru allies – who have openly discussed a possible coalition with ODM and Baringo Senator Gideon Moi’s Kanu – has rattled the DP’s allies, who say it can be exploited to block Dr Ruto from running for president on Jubilee ticket in 2022.

And in a new twist, parties that merged to form Jubilee in the run-up to 2017 poll, said the Memorandum of Understanding that they deposited with the Office of the Registrar of Political Parties handed Uhuru ultimate authority in the running of the party.

Yesterday, the Jubilee National Advisory Council (NAC) – made up of two representatives from each of the 12 merged parties – through its chair Albert Nyaundi (Ford People) and Secretary General Hassan Osman (UDF), said the president was at liberty to enter any coalition in preparation for the elections.

Article 9 of the Jubilee constitution states that the party leader has ultimate powers over the running of the party and can choose to enter political co-operation with another party or coalition.

“The party leader shall promote political consultation, engagement and co-operation with other political parties and coalitions,” reads Article 9(8).

Section 5 states that the party boss “shall have overall authority over the other officials and members of the party”. The disclosure comes barely a day after one of Ruto’s allies claimed there was a ploy by Uhuru’s wing to enter a coalition agreement with ODM and Kanu.

“We are aware that they want to steal the party and form a coalition with ODM and Kanu without our approval. That is why they want to pick people who sing their tunes to powerful positions,” claimed Aldai MP Cornelly Serem.

Nyeri Town MP Ngunjiri Wambugu, his Nandi Hills counterpart Alfred Keter and former Nominated Senator Paul Njoroge said the same way Uhuru entered the handshake with Mr Odinga without consulting any party member is the same way he could initiate a coalition agreement if he wanted to.

Uhuru and Raila struck a truce after the disputed 2017 presidential election without consulting their political parties and only informed them of a deal after making a surprise joint press conference on the steps of Harambee House.

“When he entered the handshake with Raila, he didn’t consult anybody. It is the same way he can enter a coalition. The party leader has the ultimate authority, but he would always want to carry the people with him. It is on that basis that he would inform them,” said Mr Wambugu.

“They should read the party constitution and understand the powers of the party leader. If he decides to form a coalition, he doesn’t require approval from anyone. It seems they don’t understand the implication of that clause,” Keter added.

“Even if they (Ruto team) have numbers in the National Executive Committee, the party leader doesn’t need to consult them if he decides to enter a coalition. If you read that Section 8 of Article 9 of the party constitution, it does not say the party leader will have to seek approval from any party organ. The constitution gives him the ultimate powers,” said a senior party official who did not wish to be named.

But Deputy Secretary General and Soy MP Caleb Kositany, and his Kimilili counterpart Didmus Barasa insisted Uhuru cannot unilaterally enter such an agreement without the endorsement of party organs.

Mr Kositany said the party cannot be run on the whims of an individual, adding that if the rival camp was keen on entering a political deal with Raila’s party, its members should join the Orange party.

He maintained that entering a coalition entails rigorous processes and approvals from party organs. “Forming a coalition is a serious process. I would advise them to join ODM instead of pushing for a coalition which will have to follow the due process,” said Kositany. He accused some politicians, whom he said claim to speak the mind of the president, of dragging Uhuru into political wrangles.

Mr Barasa said such a process would require a vote by members of the National Delegates Convention, which is the supreme organ of the party. “He can initiate such process but he would have to call NDC to endorse such a decision or reject it,” he said.

“These people need to understand that the party belongs to the people, not a few individuals. If they think they can hijack the running of the party through such means, then they have to go back to the drawing board.”

On Wednesday, Mr Nyaundi and Mr Osman held a meeting at a Nairobi hotel to discuss the ongoing wrangles in the ruling party. The meeting was attended by other NAC members, among them Benjamin Muema (New Ford Kenya), Said Ali (Republican Congress Party), Petkay Miriti (Unity Patriotic Party of Kenya) and Kalembe Ndile (Tip Tip).

Osman said Uhuru was handed all the powers to run the party, including picking members of the National Executive Council and the National Management Committee, during the transition period.

“If you look at Clause Five of Article 9, it is clear the party leader has the ultimate powers during this transition period. Based on the MoU that we signed, the party leader is at liberty to work with any other party. In fact, we encourage him to do so for the unity of the country,” he said.

Nyaundi added that he was surprised that members of the defunct United Republican Party were acting as if they were superior to the other parties that merged to form Jubilee. “When we signed the merger agreement, we unanimously agreed the party leader will have the ultimate powers to steer the party,” he said.

“In that agreement, the party leader has powers to enter a coalition. As NAC, we want to encourage him to enter into any co-operation that will ensure peace.”

Mr Njoroge, who sat in the Jubilee Party merger steering committee, said it was surprising that the deputy president was fighting for the control of the party when its leader was still in charge.

“I was in the steering committee in the merger of the 12 political parties. It is clear from the constitution that the party leader has the ultimate powers,” he said.