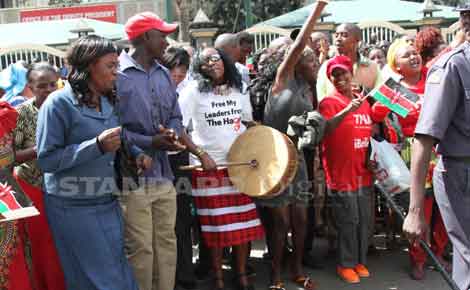 Nairobi, Kenya: A grand reception greeted President Uhuru Kenyatta on his return from the International Criminal Court (ICC) in The Hague, just two days after leaving the country quietly as a "private citizen" to attend a status conference on his case.

It took almost seven hours for the President's entourage to make its dramatic journey from Jomo Kenyatta International Airport to the Office of the President on Harambee Avenue in the heart of the city's central business district.

Surging crowds waving miniature national flags lined the routes from JKIA through Outer Ring, Jogoo and Landhies roads up to Haile Selassie, Moi and Harambee avenues to welcome the President.

President Kenyatta rode in his official limousine with his deputy William Ruto. They took turns to address the cheering crowds on numerous stops along the city roads. The convoy brought traffic on the busy roads to a standstill.

Uhuru's return was carefully choreographed, in contrast to the way he left on Tuesday morning when he left Nairobi casually dressed after transferring presidential power on Monday to his deputy.

Uhuru checked in at a Kenya Airways counter to fly to The Hague like a normal passenger as he sought to send the signal that he was a "private citizen" rather than the President. He was clad in jeans, a T-shirt and a baseball cap

But his return was full of presidential etiquette, with all the attendant fanfare. On touching down at around 6:30am, he was met by top Government and security officials eager to welcome him back.

He inspected a full guard of honour mounted by the Kenya Defence Forces, symbolically reasserting his powers as the Commander-in-Chief

"The Government was in full control even in my absence. The acting President took charge and kept things going. Now I am back," said Uhuru.

It was as if the whole Government was at JKIA to receive the President, including Cabinet and Principal Secretaries, security chiefs and legislators who filled the presidential pavilion to say "karibu" to the President.

National Assembly Majority Leader Aden Duale, who was in Mecca for the Islamic pilgrimage when the President left on Tuesday, was seen Thursday close to Uhuru.

Huge crowds began building up at the airport long before dawn. The President's entourage from the airport was slowed by the large numbers that lined the entire route to the city centre.

Security officers had a difficult time maintaining order as crowds surged to get close to Uhuru's motorcade.

"I thank God for all the prayers that Kenyans made for me. I am glad to be home and I will continue working. It is good to be home again," said Uhuru during his first address to the hundreds of people who had gathered at the airport.

Uhuru was forced to make many unscheduled stops on the journey to address the crowds.

Initially, four addresses were planned but by the time he reached Harambee Avenue, he had made far more stops than anticipated.

The return was strikingly similar to the April 2011 homecoming when Uhuru and Ruto returned from The Hague after denying the charges that had been confirmed against them by the Pre-Trial Chamber judges.

ICC judges report Kenya for not cooperating during Uhuru’s case