Fallen military pilot was darling to villagers in his rural home

Major Hillary Kibet who died in a military plane crash on Tuesday, was a darling to villagers in his rural home in Elgeyo Marakwet County.

Hillary, a neighbour who schooled with Kibet, expressed his disappointment in losing the young soldier who he said the community depended on.

As one of the most admired sons of Kulwane village in Chepkorio, Major Kibet took time to mentor the youth.

And villagers looked up to him. Children would cheer once a chopper flew over the village.

“Children would shout Kibet’s name until the chopper disappears from their sight,” said Hillary.

The Kenya Air Force pilot scored straight As in KCPE examination to join Moi University to pursue a course in telecommunication engineering.

Kibet then joined KDF as a cadet while a first year at the university.

He died alongside three others when the Harbin Y-12 aircraft he was flying, crashed in Tsavo East National Park, Taita Taveta, while heading to Voi from Nairobi.

This week, a sombre mood engulfed the village even as Kibet’s family tried to come to terms with his death.

“I had flown to South Africa on an army assignment and I was surprised to find my son among a few selected officers on training,” Kiplagat recalled.

He further recounted how close he was to his son and how they would communicate daily, save for the fateful day that his relentless calls went unanswered.

Like most of his family members, Kiplagat learnt of his son’s death on social media platforms.

He said he was heading home when a WhatsApp message popped up stating that a military chopper had crashed at Tsavo.

“This prompted me to call him again but still there was no answer. I tried calling his wife but a different person who identified himself as Major Serem picked the call,” said Kiplagat.

He said Major Serem tried to explain to him what happened, breaking all the hope he had that may be his son was still alive. “I asked Major Serem if there were survivors and he told me there was none. I knew that my son was gone,” said Kiplagat. 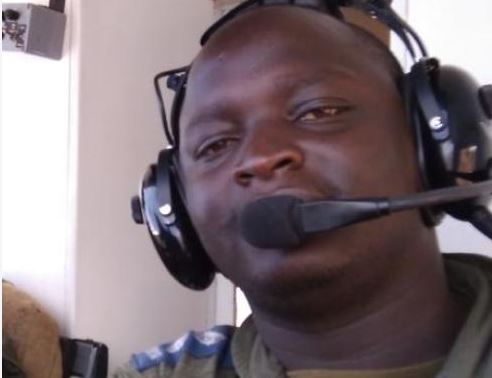 The military chopper that Kibet (above) was flying crashed on Tuesday morning at Mrima Hill in Taita-Taveta.

The family says burial will be on Saturday.

Previous article
How safe is your identity on social media, other spaces?
Next article
Africa, don't mock Trump’s idiocy