RIFT VALLEY
By Thorn Muli and Antony Gitonga | May 17th 2020 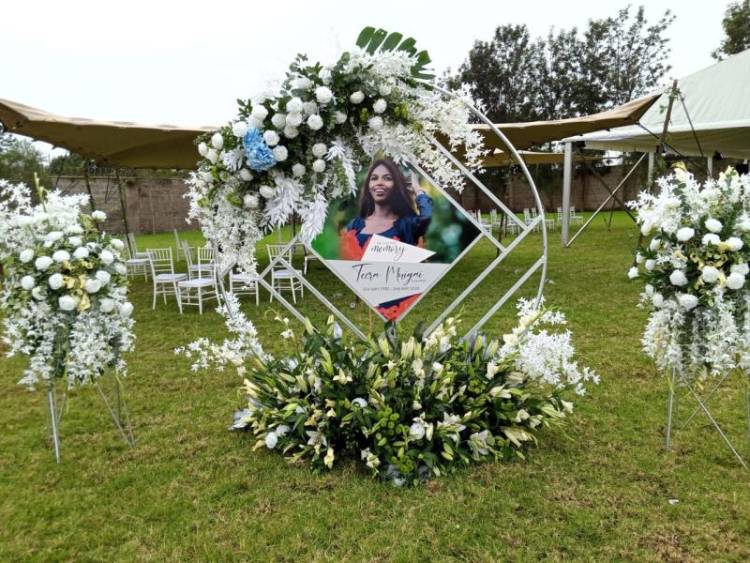 Keroche Breweries heiress Tecra Wangari Muigai was buried yesterday in a private ceremony at the family’s home in Naivasha.

Tecra’s send-off dubbed the “Celebration of a Star” was held at their home adjacent to the Keroche Enterprise on the outskirts of the town in Karai area.

The ceremony started at about 10am when two Lee Funeral Home hearses, flower-bearing silver Mercedes Benz and a black Jaguar with Tecra’s casket, pulled into the compound.

A walkway lined with white lilies led up to a white tent under which a white casket with her body lay.

In the skies, three choppers cut through the greying clouds, bringing in dignitaries drawn from both the business and political circles.

Senator Gideon Moi and his wife Zahra sent their condolences to the family.

Arnelise, the more known of the sisters in the family, was sandwiched between her parents, Tabitha Karanja, who was in a black dress and her father, James.

All had white masks, their grief evident as they struggled to remain composed while bidding farewell to a beloved daughter and sister.

The trio was preceded by Arnelise’s brothers who walked to the sound of How Great thou Art.

Social distancing was observed by the mourners who sat under spacious tents pitched on the lush lawns.

In his address, Raila talked about knowing the pain of losing a child, in reference to the death of his son Fidel Odinga in 2015.

But he also spoke of the courage shown by Tecra’s family in business.

“I know the pain of losing a child. Tecra would not have wanted to leave us so young and especially not without mourners, expressionless, covered in masks.

"We celebrate Tecra and her family for being among the few Kenyans brave enough to walk the journey of industry,” he said.

He said taxes should not be used to destroy local businesses.

“The government should support local investors who have used billions to construct such companies and the Kenya Revenue Authority should not use its muscles to oppress investors,” he said.

Tecra’s eulogy was read by her brother, James Karanja, while former Maendeleo Ya Wanawake chair Zipporah Kittony spoke on behalf of friends to Tecra’s parents.

Arnelise, in what was titled, “Eight Point Tribute to my Soulmate”, spoke lovingly of her sister.

She described the strong bond they had and which could not be broken even though Tecra was physically gone.

Tabitha paid a glowing tribute to a beloved daughter.

“Your exit from the stage in your prime has forced me to reflect on the meaning of life and the lives of other phenomenal figures who left early, who like you, lived their lives fully and with a burning urgency to accomplish a mission.

"Now it is clear to me why you kept pushing us to do it now and do it today,” she said of Tecra, who served as Strategy and Innovations Director at Keroche Breweries.

Chimano of the Sauti Sol band, on a striped blazer and white pants, gave a soulful musical tribute to Tecra.

Radio show host Maina Kageni was the Master of Ceremonies.

Amani National Congress (ANC) is set to hold a Parliamentary Group meeting to discuss a possible working arrangement with the Jubilee Party.