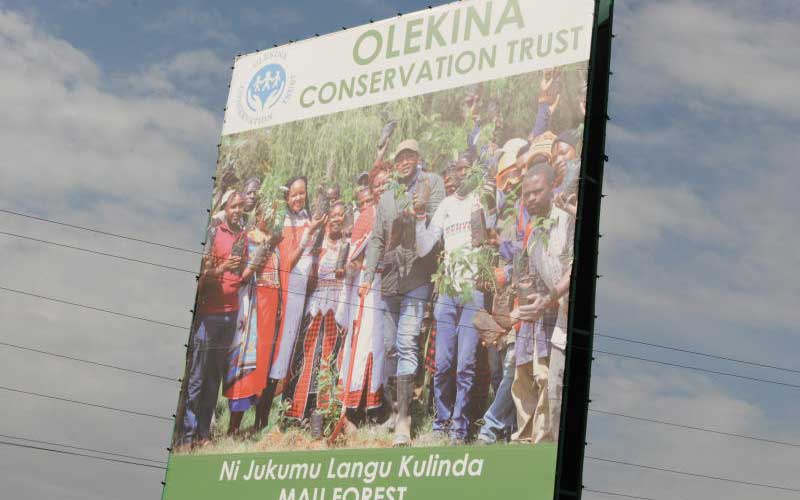 A week ago, Narok Senator Ledama ole Kina caused a stir when he erected a huge billboard in the Maasai Mau Forest to announce his new initiative to fence off the forest, eliciting mixed reactions from leaders and squatters claiming ownership of parts of the land.

The billboard of Olekina Conservation Trust is placed 300 metres from Narok town along the Narok-Bomet road.

The Trust whose slogan is “Ni Jukumu Langu Kulinda Mau Forest” (It’s my responsibility to conserve Mau Forest), according to the senator, is aimed at creating awareness on importance of environmental conservation among the locals as well as raising funds.

“Introducing the OleKina Conservation Trust. Mau Forest restoration programme is on course. We shall fence the Mau Forest and end this debate once and for all. Be part of the movement,” Kina told the Sunday Standard.

Three months ago, he led a group of Maasai politicians in issuing a 14-day ultimatum to the government to embark on phase two of the Mau evictions targeting about 40,000 illegal settlers.

Kina threatened that should the government fail to evict the settlers, he shall mobilise locals to flush them out.

The senator even hired a tractor to drill holes in the forest for planting trees, in partnership with the Kenya Forestry Research Institute (KEFRI).

He later hired a helicopter and used it to pour from the skies 20 million seedlings in the area where over 12,000 people were rendered homeless, with 23 schools closed, affecting approximately 10,000 learners.

His actions appear as an attempt to fit into the ‘big shoes’ of the late William ole Ntimama, who distinguished himself as a great agitator and defender of Maasai rights. In his lifetime, Ntimama gained unrivaled popularity in the community and became one of the most influential Masaai leaders.

But for Kina, it is a long way to go, according to local leaders who agree that the senator’s political future looks bright.

Before 2012 when he announced his interest in vying for the Narok governor's seat, little was known about him.

At 42, Kina, a towering man with brown complexion and donning his trademark afro hair style, has lately come out strongly in fighting for the conservation of the Mau Forest, which is at the epicentre of the Maasai community politics.

His combative, radical style of politics has however won him admiration and criticism from various quarters, with those in his support viewing him as an emerging force in Maasai politics.

“Like Ntimama, he is abrasive and not a fence sitter when it comes to issues affecting the community,” says Jackson Saika, the national chairman of Maasai Professionals Association.

Saika says the senator is still learning the ropes.

Bob Maren, former Ololung’a MCA who is now Kina’s personal assistant, describes him as a true fighter of the Maasai community rights who fit into the big boots of the late Ntimama.

“I think so far, Ledama is one of the politicians who have fiercely come out to fight for Mau conservation. This is the kind of man the community needs going forward,” says Maren.

Leaders from the Kalenjin community have however lashed out at Kina, accusing him of inciting people, leading to ethnic violence in Narok South and Olposimoru.

A fortnight ago, he was summoned by the area security committee over his recent alleged inflammatory remarks against a rival community.

Critics say Kina is using the Mau to fight for his political survival.

“Ledama realised he was dying politically and the recent Mau Forest evictions seem to have given him a political lifeline. In the last election, if the NVP candidate who is from Kipsigis had not split the votes by taking 72,000 Ledama could not have made it,” says Kericho Senator Aaron Cheruiyot.

Adds Belgut MP Nelson Koech: “As far as I'm concerned, the responsibility of planting trees lies with the government and its agencies such as Kenya Forest Service (KFS) and not an individual.”

Last week, Kina reportedly travelled to South Africa to find the best fence for the forest.

HOUSE OF BETRAYAL: Why does ODM want Senator Ongeri as CPAIC chair? |INSIDE POLITICS WITH BEN KITILI

Senator Ledama Ole Kina speaks out on ouster by ODM

Their parents and teachers at times have difficulties in identifying them.