Leaders split on what Ruto's deputy choice portends for his camp

Deputy President William Ruto’s decision to pick Mathira MP Rigathi as his running mate has been received with mixed reactions from across the political divide.

Dr Ruto’s allies in Mt Kenya region were not comfortable with Mr Gachagua but after Dr Ruto insisted that the Mathira MP was his choice, they had no option.

Some preferred Tharaka Nithi Senator Kithure Kindiki because they claim Mr Gachagua is “a bully and a leader who doesn’t take no for an answer.” Using the ongoing corruption case against Mr Gachagua to pile pressure on Dr Ruto to instead pick Prof Kindiki, the leaders argued that the senator is “more composed and accommodative” as opposed to the Mathira legislator.

Those who spoke to The Standard on condition of anonymity said the DP had popularised himself well in the region and the running mate issue should not have been pegged on delivery of votes but their manifesto.

“This is why we wanted a leader and not a politician, someone who is not a bulldozer and one who listens to other people. But since he bulldozed his way, most of us will take the back seat and concentrate on our campaigns,” a leader said.

Gatundu South MP Moses Kuria, the Chama Cha Kazi party leader who did not agree with Gachagua’s nomination, said the region was paying a heavy price for failing to groom a successor.

Mr Kuria who has been pushing for National Assembly Speaker Justin Muturi to be Dr Ruto’s deputy, said the only option left is for the leaders from the region to ring-fence and salvage counties’ leadership.

While a larger section of UDA leaders felt disenfranchised, close confidants of Mr Gachagua, especially from Nyeri, were celebrating.

“It is the best choice for Mt Kenya and the country. Gachagua is the only leader who has supported Ruto with all his might and resources. It has cemented Ruto’s support in Mt Kenya region,” Mr Wamatinga said.

Mr Kaguchia said: “This now means that the Deputy President must see Mt Kenya in terms of the two main political divides. Mt Kenya West has the highest votes compared to Mt Kenya East and this is what informed Ruto’s choice.”

Azimio-allied leaders led by Nyeri Town MP Ngunjiri Wambugu claimed the Kenya Kwanza played to their tune by picking Mr Gachagua, saying the choice had made their work easy.

He said corruption allegations around Gachagua will be their fodder in the campaigns.

While acknowledging that Mr Gachagua is a good mobilizer and campaigner, Wambugu said the MP’s character is the opposite of Prof Kindiki whom he described as a leader and not a campaigner. “Ruto has started accepting that he won’t be elected President because Gachagua may start campaigns from day one. He needs Gachagua between now and August to make noise,” the MP said.

“Nyeri and Central Kenya will now be activated because we know who to fight politically and I can assure you that the first rebellion will come from Nyeri,” said Mr Wambugu.

Political analyst Gitile Naituli, however, said Ruto implemented his only choice which he described as politics of pragmatism that consider extraneous matters beyond what an individual would like to do. “They have considered the possibility of Raila picking Karua and they had no luxury of picking Kindiki due to the Mt Kenya East and Mt Kenya West factor on registered voters,” said Prof Naituli.

While Mt Kenya West has more than five million votes, Mt Kenya East has less than two million votes. “If Ruto picked Kindiki, Raila will have sailed through very easily in Mt Kenya region and Ruto must have moved first to counter the strategy,” said Prof Naituli.

He, however, said there will be a major contest between Mr Odinga and Dr Ruto should the former pick Karua. But he warned those celebrating to hold their horses because the political arithmetic may change should Wiper leader Kalonzo Musyoka decide to vie as an independent candidate, a move he said may alter the equation in the event of a runoff.

“If Kalonzo goes it alone, then there may be a runoff and this completely alters the game or even structuring of government,” said Prof Naituli. While political leaders were reacting to yesterday’s events and Nyeri County was in a celebratory mood, Tharaka Nithi and the larger Meru was clearly disgruntled.

They claimed they had been shortchanged and that they were ready to decamp to Azimio La Umoja.

“We have for a long time been taken for a ride and we had hopes that our region would produce number two. We are now open to Raila and we hope he will consider one of our sons,” a local said.

The picking of Mr Gachagua, however, received support from some Rift Valley leaders.

Nakuru Governor Lee Kinyanjui said on his Facebook post that he admired Gachagua’s sense of commitment to the course he had chosen, even when he does not agree with him.

“If these energies were to be put to a good course, it would be very beneficial to the country. We now look forward to the manifesto launch and in particular the missing taboo chapter on integrity and good governance,” wrote Kinyanjui, who is seeking re-election through the Jubilee Party.

“Kenyans now have the right combination to make the bottom-up economic model a reality. Gachagua has made himself a great name in the Mt Kenya region and nationally,” said Mr Cheptumo. Ward Rep Peter Mbae said Mr Gachagua was best suited for the job. “Positions are given based on ability. Gachagua is a mobilizer and very eloquent. He has used personal resources to build a network of support in Mt Kenya counties,” said Mr Mbae.

Nominated MP Gideon Keter said Mr Gachagua’s nomination was a calculated move to galvanise support in all parts of the country.

“Gachagua is my friend and I congratulate him. He is a man who speaks his mind with all honesty and has earner acceptance in his own backyard and across the country,” said Keter.

Bahati MP Kimani Ngunjiri, who was picked to lead Ruto’s campaigns in the Rift Valley region, said Mr Gachagua has all it takes to handle additional duties outlined by Ruto yesterday.

“Ruto has pledged to delegate even more duties to the office of the Deputy President if elected. Gachagua is a workhorse. I believe he is up to the task. The region and the country now look up to him,” said Ngunjiri.

“He is a resolute and principled leader. Even if the Deputy President had picked an Angel from heaven, the critics would still have faulted Kenya Kwanza’s team,” said Mr Cheruiyot.

Koech congratulated Gachagua for emerging first among equals who were in the race to be Ruto’s running mate. Mr Cheruiyot and Mr Koech argued that though the Mathira MP has his weaknesses that opponents may capitalize on to undermine him, his good deeds for the country will overshadow them.

“My message to Azimio team led by ODM leader Raila Odinga is that the time to talk is over. It is time to walk now. Let them meet the Ruto-Gachagua brigade at the ballot,” said Mr Cheruiyot.

Premium What do Ruto and Gachagua have in common?
He did his BA (Political Science and Literature) degree at the University of Nairobi in 1988. Despite the fallout, he has vowed that his secrets with Mr Kenyatta are safe.
Politics
By Wainaina Ndung'u
1 month ago 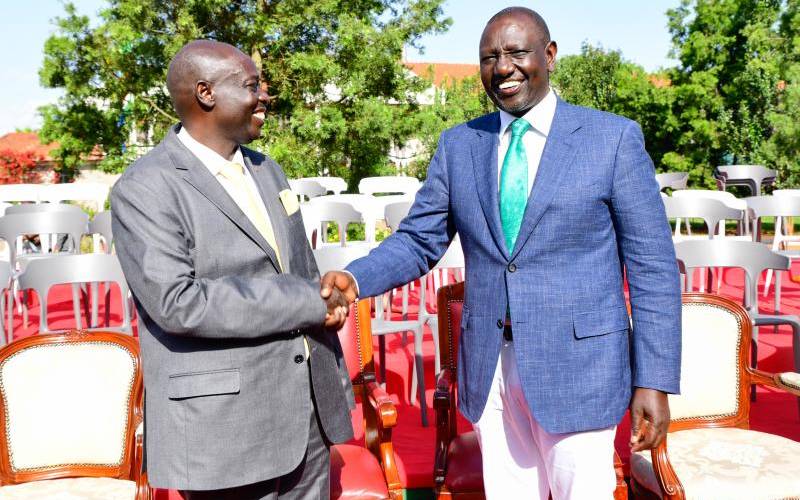 Rigathi Gachagua: From Uhuru's personal assistant to his harshest critic after political tiff
The Mathira MP now picked as DP Ruto's running mate was President Uhuru Kenyatta’s personal assistant for five years, and remains one of the Head of State’s fiercest critics.
Politics
By Jacob Ng’etich
1 month ago 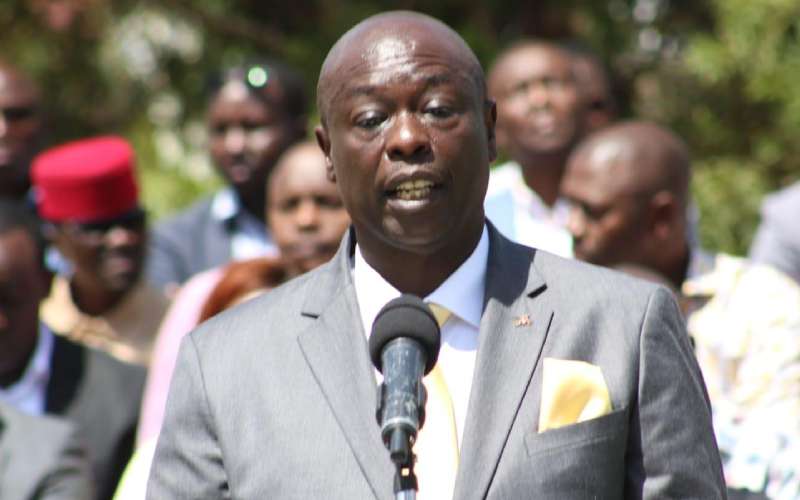 Premium Who is this man Rigathi Gachagua?
A vocal politician with deep pockets, the Mathira MP is loved and hated in equal measure. His political dalliance with Uhuru faded after the famous March 2018 handshake.
Politics
By Ndung’u Gachane
1 month ago
.

By Too Jared 3 6 hours ago
Azimio is not a political marriage of convenience, says Karua