Final phase of voter registration exercise to begin on January 17

The Independent Electoral and Boundaries Commission (IEBC) will resume the second and final phase of the Continuous Voter Registration (CVR) and revision of the voter’s roll exercise for new registration and transfer of registration status.

IEBC Chairman Wafula Chebukati on Friday the exercise that begins on January 17 to February 6 will be targeting the 4.5 million eligible Kenyans who did enlist as voters during phase one in November.

Cebukati appealed to the youth who have attained 18 and have ID cards and those that missed out in phase one to take advantage of the exercise and enlist as voters ahead of the 2022 General Election.

Apart from registering as new voters, the exercise will also allow Kenyans who want to transfer polling stations and or change their particulars to do so.

“It is an opportunity for Kenyans who missed the first phase exercise to register, transfer polling station or change their particulars,” he said.

IEBC will also undertake diaspora voter registration which will kick off on January 21 and end on February 6.

Chebukati said the commission will allow Kenyans living in seven more countries to vote in the 2022 General Election.

In 2017, only Kenyans living in Burundi, Rwanda, Tanzania, Uganda and South Africa participated in electing their president.

“The Commission also plans to conduct voter registration for citizens residing outside the country from January 21 to February 6, 2021,” said Chebukati who urged eligible Kenyans to register to enable them to exercise their democratic rights.

According to Chebukati, voter enlisting for diaspora citizens will be conducted during official working hours at the Kenyans embassies, high commissions and consulates in respective countries.

For Kenyans living abroad but who will be in the country during the registration exercise, the commission will provide a BVR kit at the headquarters to register them.

“A BVR kit will be at the headquarters at the Anniversary Towers for Kenyans living abroad but will be here [in Kenya] during the registration exercise period,” he said.

Chebukati told those who will be seeking to register at the headquarters to carry valid Kenyan passport and identifications documents.

Regarding the auditing of the voters’ register, Chebukati said the Commission will engage a professional reputable firm to conduct an audit of the register to verify its accuracy, to recommend mechanisms of enhancing the accuracy of the register and updating it.

He, however, said the auditing exercise will take place after the final voter registration exercise that will end in February.

“This exercise will be conducted after the closure of the continuous voter registration and at least six months before the date of the general election,” stated the chairman.

After the audit, the commission will conduct an inspection and verification of voters where voters will be allowed to check their particulars 60 days before the election to promote transparency and accountability.

In the last exercise, the agency targeted 6 million Kenyans, but only managed to register 1,519, 294 voters.

Chebukati said IEBC has also cleared 82 political parties to participate in the 2022 polls, saying out of the 83 fully registered outfits, only one failed to submit their details to the commission as required by law.

"The commission has allowed 82 fully registered political parties to participate in the polls except for the Alliance Real Change party that failed to give their details." 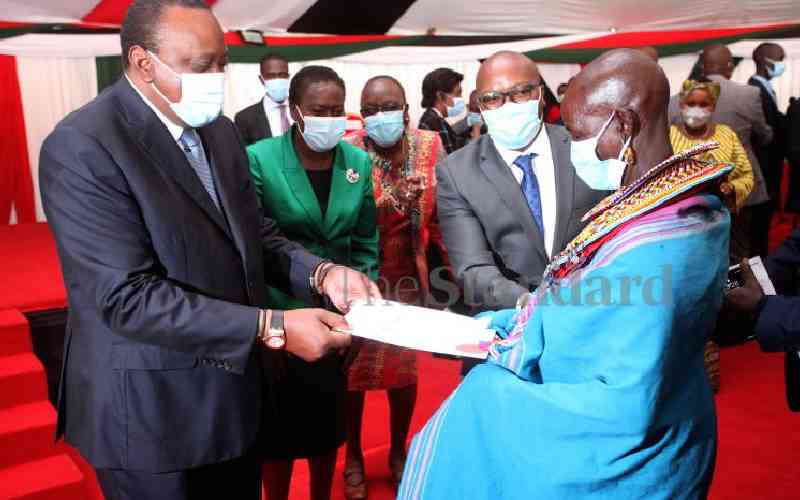 By Biketi Kikechi 6 hours ago
Will leaders solve land question or they are just paying lip service?