POLITICS
By Harold Odhiambo and Eric Abuga | May 9th 2021 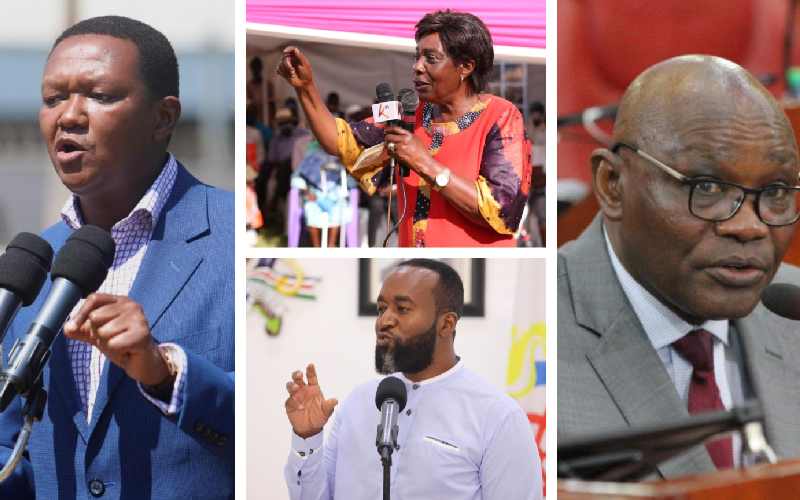 As the sun sets on their second terms in office, 22 governors are getting ready to play game-changing roles in succession politics.

Although some of them are looking forward to a peaceful retirement despite being eligible to contest for other seats, some want to change the dynamics of the country’s politics.

During the campaigns for Building Bridges Initiative (BBI) report, most governors supported the document with the hope that it would lead to the formation of regional governments which would accommodate them.

Most of them are vital for the main political players who want to succeed President Uhuru Kenyatta and they are working hard to bring them into their circles.

Even in their own backyards, those who have expressed interest to contest other seats are causing anxiety among the incumbent and other hopefuls.

But it is the ones who have presidential ambitions that are attracting a lot of attention and could be key in shaping President Kenyatta’s succession race.

Recently, Raila and former Unctad boss Mukhisa Kituyi held separate meetings in Nairobi with some of the governors, setting tongues wagging that an alliance could be in the offing.

In one of the meetings, Raila met with his point man in Western Kenya, Kakamega governor Wycliffe Oparanya, together with Dr Kituyi.

Oparanya’s and Joho’s presidential bids are still shrouded in mystery after  ODM  gave conflicting reports on those who had sent applications to be the party’s flagbearer.

It remains to be seen whether the duo will end up on the ballot given that their party leader Raila is the one many believe wants to contest.

Whether they contest, the two governors will play a key role in unlocking Western Kenya and Coast voting blocs.

Oparanya has been one of Raila’s point men in Western Kenya for years and is vital in maintaining ODM’s influence in the region as Musalia’s ANC and Wetang’ula’s Ford-K step up efforts to put the region under one political roof.

But he is not alone in the region. S

Sospeter Ojaamong, another Raila ally, whose terms also come to an end, is also marshaling support for ODM.

Ojaamong has, however, gone silent over his earlier assertion that he would vie for the presidency, with other reports indicating he could be eyeing a parliamentary seat.

Oparanya and Joho have been undertaking grassroots mobilisation campaigns for ODM, which is facing an onslaught from other parties such as United Democratic Alliance (UDA), which are keen on controlling the Western voting bloc.

Oparanya’s handlers, however, said he wants to become a party leader due to the huge support he enjoys in  Kakamega County so that he could be at par with Musalia and Wetang’ula.

A number of political pundits have told The Sunday Standard that second-term governors wield a lot of influence, control substantial votes and have huge financial muscles that is vital for presidential hopefuls.

Kenneth Amondi, a constitutional lawyer, said the influence of the retiring governors is immense and could be vital for presidential hopefuls.

He said the governors have ready structures, having marshaled support in their backyards for two terms and could easily use those structures to support a specific political outfit.

“They are people who were controlling billions of shillings and had their own structures.

“It is easy for them to continue influencing political directions in areas they had support,” said  Amondi.

In Ukambani, second-term governors could play an important role for presidential hopefuls and could be the force to challenge Wiper leader Musyoka’s influence.

In the region, all three governors have their own parties and have been marshaling grassroots support even as they seek partners for the 2022 political race.

Prof Kivutha and Mutua are forced to reckon with in Kenya’s politics.

Charity Ngilu (Kitui), though a first-term governor, is also an influential political figure, having ran for president in 1997.

The trio are said to have held a meeting with Raila at a Nairobi hotel where they discussed their roadmap for 2022.

A source who attended the meeting said the group has planned more meetings in the coming days as they seek to craft a 2022 strategy.

At the Coast, Mombasa’s Joho is bracing for a duel for ODM’s party ticket against Raila but the influence of Kingi and Salim Mvurya (Kwale) cannot be wished away.

In the last one month, Joho and Kingi have held five meetings in Mombasa and Nairobi in what their allies say are efforts to unite the 1.7 million-odd voters in Coast.

Should their bids be successful, all the presidential hopefuls, including Ruto who have turned the region into a hunting ground to challenge ODM’s dominance, may have to go back to the drawing board.

Questions, however, remain as to whether efforts by the governors to chart a united front before entering any coalition will bear fruit.

Mvurya was elected on a Jubilee Party ticket in a county that is perceived to be an ODM base.

He recently campaigned for an independent candidate who won the Msambweni parliamentary seat in a by-election.

In Nyanza, four governors will retire in 2022 and they could play a big role in the succession races, including the MP and Senate seats.

Ongwae has been Raila’s point man in Kisii and was behind ODM’s recent win in Kiamokama by-election.

He is one of the respected Gusii community political leaders due to his good track record and style of politics.

He has managed to balance his relationship with both President Kenyatta and Raila.

Obado, who announced he would vie for presidency, is creating anxiety in Migori after he started vouching for little-known People’s Democratic Party (PDP) to challenge ODM’s dominance.

He has emphasised the need for the region to have more parties to promote democracy.

Raila and his allies, however, see Obado as a person who is being used to undermine ODM and scuttle the party’s chances.

During the burial of former MP Zablon Olang’ in Nyatike in Migori County, Raila accused Obado of trying to  introduce Ruto’s UDA in Nyanza.

In Siaya, Governor Cornel Rasanga’s interest in Alego Usonga parliamentary seat has caused ripples among other hopefuls who claim he should opt for a bigger seat.

In Mt Kenya, Wa Iria has already formed his party and announced he will be in the race for the presidency.

The party is planning an onslaught on Kisumu, Migori and Kisii voting blocs where the Raila-led ODM party enjoys huge support.