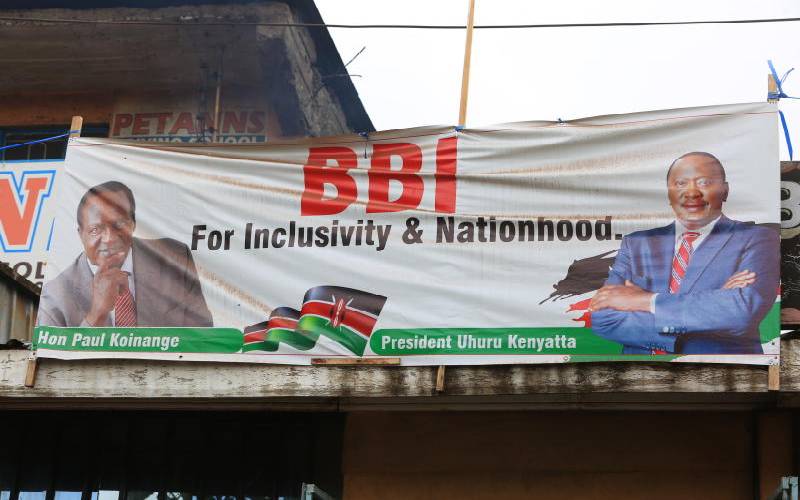 The proposed amendments of the Constitution by President Uhuru Kenyatta and ODM leader Raila Odinga will cost taxpayers close to Sh20 billion more within the first financial year should they take effect.

An analysis on the estimated cost of the Constitution (Amendment) Bill, 2020 by the Parliamentary Budget Office (PBO) indicates that the Sh19.5 billion will be taken up by the additional constituencies, an expansion of the executive by creating the offices of prime minister and two deputy prime ministers, among other changes that will result in a bloated budget.

The establishment of the youth commission might not come at a hefty cost in its first year, with PBO assuming the amendments will be completed before 2022. However, in three years after it is rolled out to counties, the cost of having the commission will rise steeply.

Yesterday, former Majority Whip in the Senate Irungu Kang’ata, who had placed the initial request for the simulation, claimed the cost was too heavy for a country that would still be battling Covid-19. The simulation was presented to the Senate Standing Committee on Justice, Legal Affairs and Human Rights yesterday.

“The Sh20 billion is enough to provide free lunch for every primary school pupil in Kenya. This would boost school attendance and nutrition. Whereas there are some BBI suggestions that are worth considering, the budget implication seems too huge for a poor country such as Kenya,” said Mr Kang’ata.

The new-look bicameral Parliament, expected to welcome additional MPs, will have the heaviest toll on the national coffers.

To run the National Assembly and the Senate, the PBO noted that the Parliamentary Service Commission will require at least Sh9.63 billion in the first financial year alone, although the cost is expected to decline in subsequent fiscal calendars.

The National Assembly will require an additional Sh7.8 billion, while the Senate will need an additional Sh1.83 billion. This is due to the addition of 70 extra constituencies, scrapping the women representative seats and replacing them with four members, being two women and two men representing persons with disabilities.

Assuming the current car grants of Sh5 million are maintained for the 453 MPs, taxpayers will pay an additional Sh2.3 billion.

The cost of running the National Assembly will rise to Sh26.3 billion from the current Sh18.5 billion per year.

The PM’s office will leave a Sh1.5 billion in Treasury’s coffers in a year, given it will have to be set up afresh with employees and equipment that will need to be maintained.

It is the same thing with the offices of deputy prime ministers, which will set the country back by a total of Sh2.4 billion.

For these amendments to become law through passing various legislations, the AG’s office and the Kenya Law Reform Commission will require Sh561 million in the first year, which will then rise to Sh620 million in the second year.

“The provision also tasks the Kenya Law Reform Commission and the Attorney General to prepare the relevant bills as soon as practicably reasonable to allow Parliament to process and enact the said legislation,” reads part of the brief to the Senate Committee.

Kenya will subsequently spend Sh3.3 billion on the Youth Commission after it has been extended to all the 47 counties. The commission is aimed at helping youths secure jobs.

Creating the Directorate of Criminal Investigations (DCI) as an arm of the National Police will see the country incur an additional Sh293 million, while the office of DCI, to be headed by the Deputy Director of Police, will take another Sh300 million.

There will also be a new of Office of Judiciary Ombudsman, which shall add Sh220 million to the country’s budget.

This week, ODM leader Raila Odinga sought to revive the momentum on a referendum after weeks of inaction, which had triggered whispers that the process was being abandoned.

ODM deputy leader Wycliffe Oparanya had asked the government to abandon the referendum and use the money meant for it on other development activities such as fighting the third wave of the Covid-19 pandemic.

Restarting life after 32 years in jail for murder of politician

Ogola said he was satisfied Adego served sufficient time in prison and that he is now a changed person.

By Special Correspondent | 1 day ago