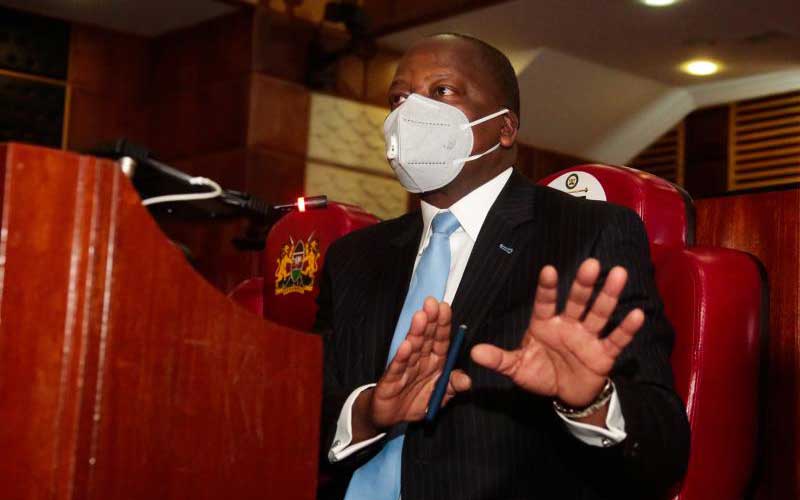 As soon as he was allowed to speak, Health Cabinet Secretary Mutahi Kagwe (pictured) brandished a document he swore contained evidence that his ministry was clean.

He waved it, gleaming with relief, as though he had evaded a calamity. For someone whose lectures are as endless as the country’s ruling elite appetite for public funds, his display of humility seemed off.

But Kagwe, more famous as Mtu wa Corona, was saving himself an embarrassing fate that had earlier visited an official from the Transport ministry for showing up before the National Assembly’s Health Committee unprepared.

Kagwe was in Parliament on Wednesday to expound on claims that gifts from the Orient found their way to some people’s doorsteps.

He had watched as Transport Chief Administrative Secretary Chris Obure was chased out of Bunge for his underwhelming explanations on the whereabouts of some Covid-19 donations and he didn’t fancy walking that route.

He had also seen how apprehensive the waheshimiwas got when they learnt of James Macharia’s (Transport CS) absence from the same sitting.

To avoid any trouble, Bwana Waziri had to play the part and convince the committee members that he took his work seriously and, more importantly, that he didn’t look down on their role of grilling the big bosses.

‘Tell us about yourself’ must have been the first question, going by the amount of time the former Nyeri senator spent enumerating his credentials and his role as a CS and repeating them like some chorus.

“I am just a CS,” he almost implored when introducing himself, in what sounded like a call for mercy to MPs. He made his opening remarks long and kept talking in circles. It was as though he was trying to put off the agony of facing the MPs and their nosy questions. All the while, he insisted that he didn’t mind answering any queries they might have.

Kagwe spoke and spoke some more, mostly preaching his ‘Covid is real’ gospel to the doubting Thomases who still thought that the pandemic was as much a hoax as a politician’s promises.

For a person who has spoken on the same subject for six months now, he didn’t sound in the least bit jaded.

And had no one interrupted him mid-sentence, he would have probably uttered the words that made him a celebrity: “Fellow Kenyans, in the last 24 hours…”

Bernard Koros (Sigowet/Soin MP) was the first one to cut off the Health CS as he spoke.

The first time Koros interjected, Mtu wa Corona’s eyes rolled as his head nodded in annoyance, having been stopped from defending himself against claims of interference with the Kenya Medical Supplies Agency.

At that moment, he must have longed for the comforts of ‘Mafia House’ where no journalist dared to interrupt him. But this was Bunge, and he didn’t make the rules. He knew that already. He had no say in deciding when the sitting would end.

Furthermore, he wasn’t allowed to remove his mask. Not even when he made a facial expression he felt the waheshimiwas needed to see.

And in case you were wondering, no one knows of the contents of the documented evidence he had earlier wafted in the air, certainly not from him.

Mt Kenya to get lion’s share of new MP slots

Mt Kenya to get lion’s share of new MP slots