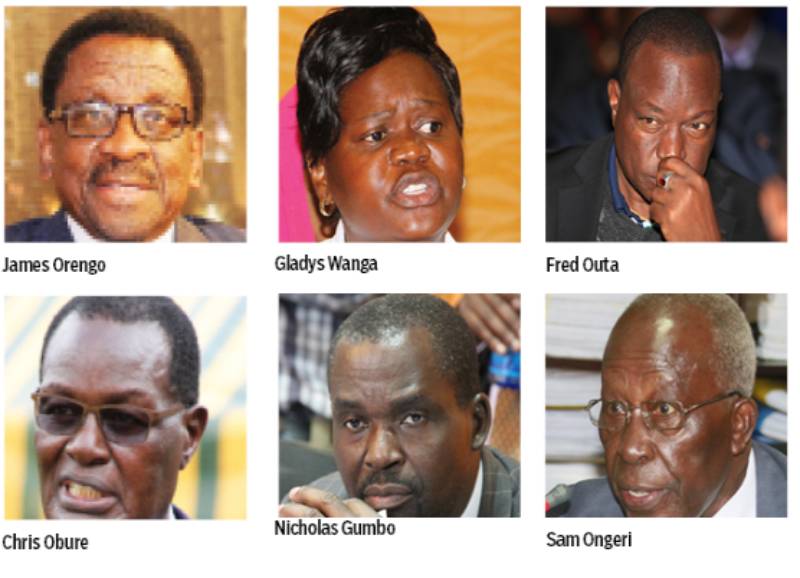 And as the clock ticks towards 2022, several career politicians have started plotting and are marshaling troops for a tough political battle.

Although politics in the region has been low-key since Covid-19 struck, Sunday Standard has established that covert grassroots mobilisation is at its peak in several counties.

The politicians have been using the Building Bridges Initiative (BBI) rallies to shape their local political ambitions. With the rallies banned because of Covid-19, the trend has now shifted to grassroots mobilisation.

All the five governors were elected on ODM ticket but were given a run for their money by independent candidates who are preparing another onslaught in 2022.

The Sunday Standard has established that several aspirants coveting the jobs are already getting their teams on the ground to prepare to take over the seats.

Some of the leaders have been taking advantage of the Covid-19 pandemic to build grassroots support by donating foodstuffs and masks to residents while others have been supplying aid to the hundreds of victims displaced by the swollen Lake Victoria.

A fierce political battle is expected to emerge in all the counties, with some of the people touted to contest the seats being allies of ODM leader Raila Odinga.

Save for Gumbo, who fell out with the ODM party and contested as an independent candidate, the other politicians who have shown interest in the seat are close allies of Raila.

Although Orengo has not formally confirmed his interest in the seat, he has already been endorsed by a section of the leaders in Siaya, including Alego-Usonga lawmaker Samuel Atandi and Christine Ombaka (woman rep).

Orengo says the poll will not be for the faint-hearted, but it will be free and fair for all contestants.

“We do not want a repeat of what has happened in the previous elections. If you are defeated, you must accept and support the winner,” said Orengo.

The endorsement has triggered mixed reactions, with some of the competitors and their supporters vocally opposing Orengo’s bid, noting that his development track record as Ugenya MP, for many years, is wanting.

Orengo, who is serving a second term as senator, has been crisscrossing the county, participating in fundraisers and other donations for vulnerable families affected by floods and Covid-19.

Another leader who has confirmed his candidature is Gumbo, who is promising a bruising battle and claims he is ready to make amends after he lost against Rasanga in 2017.

On Wednesday, Gumbo claimed that some of the leaders out to replace Rasanga were clinging on some of the projects he initiated as MP to market themselves.

“I’ve heard several people taking credit for some of the projects that were initiated during my term. 2022 will differentiate between talkers and implementers,” said Gumbo.

Another fierce political battle is looming in Homa Bay, where some politicians have started grassroots mobilisation to give themselves an edge in the race to replace Awiti.

Big political names and senior ODM members from the county are engaged in series of activities in a county that has been at the centre of criticisms over alleged poor implementation of development projects.

Mbadi confirmed that he would contest for the seat and said he would battle for the ODM ticket for the Homa Bay gubernatorial seat with the other candidates.

“There is no doubt about it. I will go for the seat. I will seek the ODM nomination just like the other candidates who have also shown interest in the seat,” said Mbadi.

He said 2022 elections would present ODM with a chance to front tough candidates in the region, adding that they were not likely to face a huge challenge from other parties or independents.

“We have very strong politicians who have already expressed interest to replace the governors finishing their second terms. We have almost three strong candidates for Siaya, Homa Bay and Migori counties that have already shown interest in the seats,” Mbadi told Sunday Standard.

Wandayi is yet to make a decision on whether to contest the seat, but claims he will decide when the right time comes.

“Right now I am still committed to the people of Ugunja who elected me as MP. But when the right time comes, I will declare my 2022 political ambitions,” said Wandayi.

Former Raila aide Caroli Omondi, who had also been tipped to make a political comeback, has now shifted his attention to Suba South Constituency and said he will choose to back any of the candidates who have thrown their hats in the political ring to replace Awiti.

“I will go for the Suba South parliamentary seat because I want to play national politics,” said Omondi.

Magwanga told Sunday Standard his mettle in politics was still strong and that he was development-driven. In 2017, Magwanga gave Awiti a run for his money and after being edged out, he unsuccessfully challenged the election in court.

In Migori, Senator Ochillo Ayacko is also being fronted to take over Obado’s seat in 2022. In 2017, he unsuccessfully tried to unseat Obado. He, however, got a new lifeline after the senate seat fell vacant.

In the Gusii region, several candidates are building multi-million shillings campaign war chests that could change the region’s political landscape.

In Kisii, Chief Administrative Secretary for Infrastructure, who is also a former senator, Chris Obure, is readying to take over the mantle from Ongwae.

Obure’s recent remarks at a funeral in Kisii that he was still too young to retire from politics has been seen as an indication that the long-serving legislator could make a comeback.

Senator Sam Ongeri, who on Thursday took over the chairmanship of the powerful Public Accounts Committee, says his political ambitions were still bright.

With a network of the elderly and a strong following of Christians, Ongeri has slowly gained Raila’s trust and could easily be a key player.

National Agenda Party of Kenya leader and Nyaribari Masaba MP Ezekiel Machogu is also angling to succeed Ongwae. He is serving his first term in Parliament.

Former South Mugirango MP Manson Nyamweya, who made his first attempt on the county seat, will also be making a comeback through Kenya National Congress.

Joash Maangi, who is the current deputy governor, maintains that not even the imagination of a system picking on a preferred candidate could stop him from having his name on the ballot.

“I am prepared to battle it out with all my opponents. I have enough experience to serve as the next governor,” said Maangi.

In Kisumu, where Governor Anyang’ Nyong’o is serving his first term, seasoned politicians and his former allies are also plotting to upset him.

Senator Fred Outa has vowed to unseat him while former Governor Jack Ranguma is also plotting a comeback.

Former Kisumu Central MP Ken Obura, who was a close ally of Raila, is also said to be on his way back.