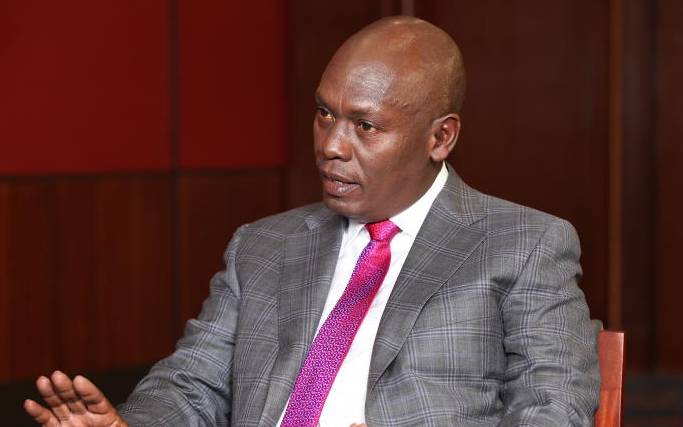 Former Kiambu Governor William Kabogo (above) has condemned the mistreatment of Gatundu South Member of Parliament Moses Kuria during the Building Bridges Initiative rally in Kitui over the weekend.

Talking to Standard Digital, the former county chief said time was ripe for those steering the BBI meetings to embrace everyone including those with divergent opinions.

“Of course Kuria is a nuisance sometimes…allow people to speak… ejecting him from the meeting was not the right thing to do,” he said.

He, however, blamed Kuria for showing up at the meeting late after everyone had settled hence causing chaos. Kabogo said that the BBI had been hijacked by politicians, as he echoed the pleas of US ambassador to Kenya Kyle McCarter, who pleaded with the Kenyan leaders to make the BBI a people-driven process.

Gatundu MP was temporarily ejected at BBI meeting on Saturday, and forced to sit on the ground before leaders as a section of the crowd and leaders called for him to be escorted to the dais.

He challenged the political leaders to address the grievances to the committee of experts through a memorandum. Has revealed that he was planning to do the same before the team heads to Meru.

Kabogo said that despite the political calmness achieved through the Handshake between President Uhuru Kenyatta and ODM leader Raila Odinga; the plights of the common Kenyans are yet to be addressed.

He lashed at the planned introduction of regional governments which proponents of the BBI have mooted as one of the proposed changes in governance.

Speaking on the subject while being interviewed at Spice FM, he said:

“[They want to] expand the government and accommodate individuals? I have a problem with that. Why do they want to expand and pay these salaries? Where are you going to get this money from?”

“How are you going to share these slots? In the next five years, Kenya will have new issues and there will be proposals to change the law again” he further said.

He stated that amending the Constitution would not cure the problems in the country, and urged those agitating for a law change to look at the US and UK as case studies, where laws are not easily changed.

When asked about his plan for 2022 elections, whether he would run again for Kiambu gubernatorial position, he replied:

“I don’t know; I am not sure. For now, it is too early to say. I always say that I am not one of those people who just look for seats. If I was looking for a job, then I will definitely say yes.”

Kabogo, who served as Kiambu County governor up to 2017 after his stint as Juja MP hinted that he was being persuaded by his supporters to contest for the Nairobi governor position too, aside from his home county.

Speaking on the misfortunes bedeviling the SGR, the former legislator said that the government may have to change tact to reap revenue out of the infrastructure.

He said that national and county governments ought to have a plan of sharing revenue from the Mombasa Port so that businesses in Mombasa can also survive.

According to him, Mombasa County is reeling from the effects of attempts by the government to relocate the Mombasa Port.

The move has also elicited protests from the Mombasa-based civil society groups, who assembled every Monday to stage demonstrations in Mombasa.

They blamed the national government for killing jobs at the port and suffocating the Mombasa County economy.

AfDB: African economic growth to accelerate to around 4 per cent