The civil society has been challenged to give the country political guidance by advocating for policies that strengthen nationhood.

Addressing a forum convened by the Citizens’ Coalition for a Constitutional Culture (4Cs-Trust) on the implementation of the Constitution recently, former PC Joseph Kaguthi said civil society must share the responsibility for the growth of negative ethnicity and lack of national unity.

“We, as leaders, public servants, constitutional commissions, and civil society have failed in the task of nation building and enhancing the gains of the new Constitution. Kuzaa si kitu ngumu, kulea ndio ngumu (to give birth is not difficult, bringing up the baby is the hard part),” Mr Kaguthi told the participants.

The former chairman of the National Authority for Campaign Against Alcohol and Drug Abuse told the civil society that the country needs guidance as it goes through transition to a new system of governance.

Civil society, political parties, NGOs and lobby groups are working with the Ministry of Justice and Constitutional Affairs under the auspices of the 4Cs-Trust’s Kenya Tuitakayo (The Kenya We Want) initiative to awaken Kenyans to the reality of a new constitutional dispensation.

The forum provided an opportunity for a citizen report card on the status of the implementation of reforms and the generation of publicity around emerging issues and concerns, especially around legislations and the legislative environment ahead of elections.

“We are organising these forums countrywide to embolden and affirm that the emerging constitutional spirit constitutes a priority agenda in informing and directing proper management of the transition and the implementation of reforms,” 4Cs Executive Director Ochieng’ Khairalla says.

Civil society has designed a strategic plan to restore ‘Wanjiku’ as the symbol of the reform agenda so as to secure, defend and nurture the gains of the new Constitution by enhancing citizens’ insight, oversight and audit role into constitutionalism and legislative environment.

The parliamentary Constitution Implementation Oversight Committee, Budget Committee, the Commission on Administration of Justice (Ombudsman), the Transitional Authority, the International Commission of Jurists Kenya Chapter, the Kenyans for Peace with Truth and Justice and the Kenya National Human Rights Commission are also involved in the initiative.

Civil society says it represents “Wanjiku”, the symbol of the common wananchi in the struggle for democracy and reform agenda as it emphasises the need for intensified civic education and public participation in leadership.

However, like Kaguthi, they are also asking whether ‘Wanjiku’ is capable of making informed decisions, given the manipulation of the political environment and the rocky constitutional legislation terrain.

“Who will change the mindset that prevails in our society and in the civil service today? We must insist that we are serving wananchi and Wanjiku, not serving the Government,” Kaguthi said.

He said a new generation of leaders is emerging and court rulings are being honoured, but added that the Government is not doing enough in the inculcation of values and enhancing nationalism.

“We are obsessed with a culture of my tribe, my party, my property. We have lost our identity of Kenyanness. When one dies nobody cares. Civil society must become more objective and tell CIC, the Judiciary, TJRC, and NCIC that this is not well boldly, respectfully and candidly based on merit,” he said.

He singled out the Mzalendo Kibunjia-led NCIC, saying that it is “pre-occupied with putting us in our boxes” instead of building the foundations of national cohesion and unity. Maragua MP Elias Mbau, who chairs the Parliamentary Committee on the Budget, also addressed the forum and said there is need for engagement between civil society and legislators in implementation of the new law.

Talented group is talk of town

The Billian Music Family is a group of children from Mathare slum who are gaining popularity in and outside the slum. Their songs are captivating, educative and entertaining. The talented children are attracting attention on the Internet, where their music videos are watched by hundreds of people on YouTube. And to underline their creativity, they have shared the stage with experienced musicians in Kenya, including Nameless, Wyre, Suzanna Owiyo and Jimmy Gait at the recent Kids Festival at Carnivore grounds, Nairobi.

Mohamud ouster: Be lenient with me, Wajir Governor pleads with Senate 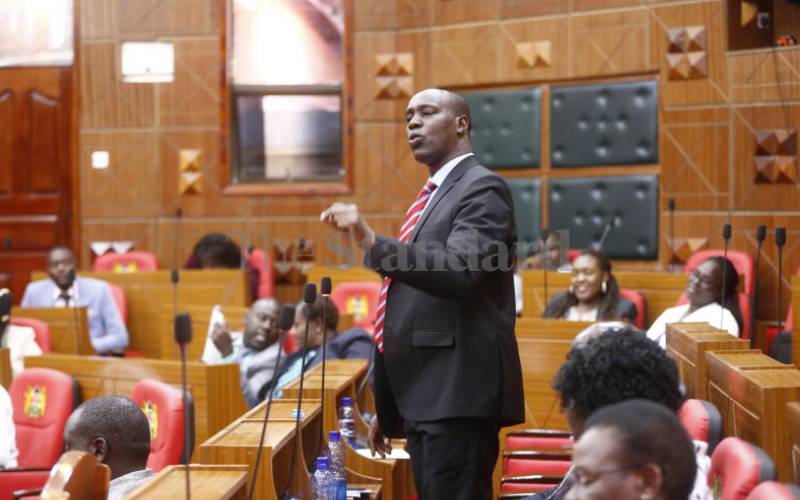