By Dennis Kabaara | 7mos ago 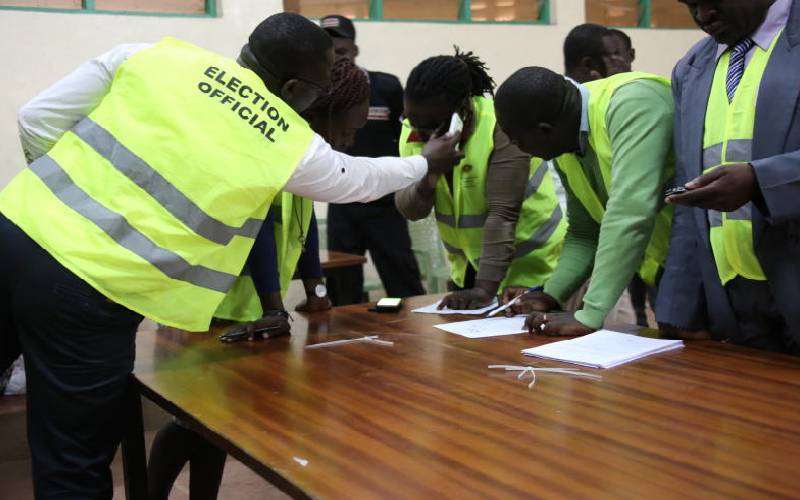 Having sorted out political party questions to everyone’s benefit when it initially seemed like a one-sided advantage, one of the past week’s highlights has been the move to amend our actual electoral laws. It would seem that live media transmission of results is a bad idea. Or that the paper trail should be physical, and manual. It is amazing how good we are at legislating what should be normal behaviour.

There is language in this elections Bill to clarify the division of labour between the Office of the Registrar of Political Parties (ORPP) as our new Kenyan Electoral Football Federation and the Independent Electoral and Boundaries Commission (IEBC) as the Designated Referee for Kenya’s electoral football matches.

In footballing election terms, this could creatively mean ORPP supervises IEBC. This was not part of the aspirational long-term picture that our progressive Constitution envisages and demands. The real trouble that Kenyans do not get is that our elected representatives (the actual players in this football game) love to change the rules before the League or Cup Final we call the election.

The rejoinder is that Kenyan fans (voters), particularly our youth are increasingly uninterested in whether or not IEBC’s umpteenth voter registration exercise is of any use. It doesn’t help that all we really know and learn about IEBC itself, using its website as a reference, is bureaucratic rather than about “post-election evaluations”, “pre-election planning” and press statements on this, that and the other.

Lest we forget, between general elections, IEBC works with a Sh5 to Sh6 billion budget a year, before by-elections. Half of that is payroll but we still don’t see the real work (completed activity), results (improvements from lessons learnt) or impacts (a real contribution to a more predictable Kenya).

On the currently lagged voter registration that is costing taxpayers another gazillion shillings, what is not happening among the youth cohort targeted by the latest effort? One part is a “what difference does it make?” question. The second is “why bother to wake up early to vote?” These are valid questions.

But there is a very interesting third part that speaks to the core of this weekend’s conversation. Digital. This opens up a discussion around the idea that, mostly, people (old, middle and young) might actually want to vote (having decided whom to vote for) based on three motivations. Convenience - it needs to be easy. Seamless - it should be convenient. Painless – it must be seamless. Before we shout “free, fair, credible, transparent and just” elections, these are the irreducible minimums. Digital is and was the idea.

A simple picture might help. The IEBC “cost driver” argument for its mega-billion budget is that it will have 50,000-plus polling stations this year. In perspective, the 2017 election cost us almost Sh60 billion including the repeat presidential with 10 per cent fewer stations; almost Sh50 billion before the repeat.

Any logical and prudent forecaster of Kenya’s public finance knows 2022 will eventually cost IEBC and Kenyans at least Sh60 billion on one round only, not the current Sh40-plus billion being screamed at our national Treasury. But it isn’t these numbers that Kenyans worry about, it’s the credibility, acceptability and legitimacy of the results that emerge after this big public money moment.

What if, for the sake of argument, our polling stations were virtual? Very quickly, we may realise that we might not need them at all, right? In the same way you don’t need to queue and line up at your exact local bank branch to do banking, of what use is the polling station if all you want is to do is vote your local MCA, constituency MP, county Governor, Senator and Women Rep, and national President? At what point did the Greeks who began to define modern democracy decree that it required a physical presence?

Thinking further, here is what a digital election for Kenya in 2022, almost ten years after 2013, and fifteen since our 2007/08 post-election pogrom, might have looked like. Digital identification as Kenyan, leading to digitally prompted and assisted registration as a voter. That might have been Huduma Namba.

Then digital voting, including mobile, and probably through modern tech like blockchain that allows you to track your vote through counting, tallying and results transmission in real time. You vote; you count.

There are natural objections to this perspective, which are summarised in three phrases. Privacy of data, or simply, hacking. Security and protection of data, or simply, more hacking. Manipulation of data; basically serious hacking.  With three potential results. Computers might vote. Computer might do more than vote. They might change how we vote. Or do worse. Take the work of ORPP when many non-party Kenyans were quietly assigned to parties, and in the latest twist, any attempt to resign from bad and wrong registration pushes you to a specific party. No wonder it is said that technology is not democracy.

These are real questions, but if we don’t shoot, we can’t score, right? There is an approach to dealing with digital risks, and it is called, simply, digital (or cyber) risk management. Which might include getting the hackers on the right side of history, if there is such a thing. Remember, the human mind is the ultimate software space as a program, application and user file. Hackers are human, before we get to (ro)bots.

There might also be physical objections to this perspective, given IEBC’s penchant for repeat purchases of technology hardware before every election, and procurement “shenanigan agents” who live in this space. And this might be the point as we move beyond elections and consider Jubilee’s digital works.

It bears no reminding that our 2013 transition election was popularly cast as a battle between “digital” and “analogue”. That the future painted bright would be a tour-de-force in our transformation to modernity. The early days of Jubilee officialdom spoke to a brilliant ICT master plan built around three “digitals” – ICT as business, ICT in business and digital government. A Presidential Task Force was then appointed to harness four of the 11 big ICT initiatives in the master plan to digitally transform Kenya.

In directing its attention to these four initiatives, the Task Force basically sought to integrate our identification data for good. All people in Kenya would be identified, including foreign residents and refugees in the sort of unified national ID system that is finally beginning to bear fruit in India with their private initiative Adhaar scheme linked to a national identity infrastructure.

So too would our companies and other formal entities and establishments. People and establishments would be linked to land and assets, including livestock. The ICT master plan envisaged four hubs; one for each of these four.

In a voting context, a single digital identity was the simple need. The big picture, set out in early presidential speeches at the time was “a single source of truth” where “everyone is linked to everything”. This was a truly ambitious moment even by world standards; a real software moment for the people.

The record suggests that this was too ambitious. A little like our equal shift in understanding from human to state security; results have been more evident and visible in hardware choices or institutional growth decisions. Digital could have baked us a bigger cake, but it is instead now part of the existing cake. As a digital Marie Antoinette might have mused, “give them the analogue bread, we shall eat the digital cake”.

This may all sound a little pessimistic given the modernisation agenda that Jubilee has relentlessly pursued, yet, if one thinks through the real digital moments Kenya has experienced in the past decade (and Safaricom is a firm from a previous decade), there is great private innovation across our agriculture, industry and service economies sectors without the lasting impact that digital brings.

Simply, we have faster transactions but income isn’t changing in aggregate and neither is the shape of our national wealth. Here, therefore, is today’s humble reflection. Global benchmarks point to Kenya as a high-potential digital economy; indeed, a recognised leader and benchmark among our African peers.

Yet our elections cannot cope with digital. And between elections, if we use as a proxy the abject difficulty that we face in getting government transactions correct through IFMIS as a case in point, there are further struggles.

We love the smaller stuff, and this is a plus for citizens who always find new ways to interact in our liberal and liberalised tech environment, yet the really big things evade us. Big is bad, small is beautiful.

As we look ahead, we may summarise this in two thoughts. How to “software” our digital agenda away from “hardware”; and how to think big better as we support or leave small alone. From these opening snippets of observation on our digital agenda, what might our next leadership focus on? Watch this space.

Premium William Ruto: This is why I named Uhuru peace envoy for troubled region
Politics
By Edwin Nyarangi
29 mins ago
2022 must-play horror gaming experiences for you
Arts and Culture
By Boniface Mithika
39 mins ago
Ari Lennox's 'age sex location' revels in infatuation
Showbiz
By AP
43 mins ago
Pharoah Sanders, influential jazz saxophonist, dies at 81
News
By AP
48 mins ago
.

By Edwin Nyarangi 29 mins ago
Premium William Ruto: This is why I named Uhuru peace envoy for troubled region

By Antony Gitonga 59 mins ago
Premium Inter-county taxes illegal, should be done away with, Senators told

By Rosa Agutu 1 hr ago
Premium Vegetable farming: no need for pesticides
.