The rise of Kenyan women: History says they are good political leaders

By Edward Buri | 4mos ago

One of the responses to this question is power. A mother and a daughter often pose little threat to the power status of the man. But a wife and the female colleague can stand in the man’s line of power, evoking hostility.  A question is often asked: What is the uniqueness of women? What is the different thing they bring to the table?

While there are many answers to this, one possible answer takes the form of a question: What is it about women that makes men want to suppress them? If they were not valuable, why bother to tame them? You cannot suppress a weakness. You cannot cage that which has no wings. You cage that which when left free, has wings to fly. Restriction of women can only be explained by expounding the hazards that accompany their strengths.

The recent General Election point to a reality that Kenyans are increasingly getting comfortable with being led by women. It has not always been so. The number of women taking up political leadership has increased. That they are a product of competitive politics is a public endorsement of the value of women as agents of development. Even sections of the country known to be heavily male bent are progressively electing women. We are surely turning a corner in our understanding and appreciation of womanhood. We will soon see a generation where women in leadership will be taken for granted as our culture normalises women in power.

It must be stated that the capacity in women to lead now being observed is not new. It has always been there. It is that fearful cultural systems choose to stunt their image. Whereas governments and institutions that are now opening more doors for women should be applauded, they are only doing the right thing. Women have not recently evolved and are just taking up places that have always belonged to them.

The practice of domesticating women so that they become servants is not only a fatal error but a sin. A comprehensive engagement of scriptures does not support women as lesser but as equal beings. As long as God effects freedom, He will oppose all arrangement that oppress His image. Women too carry the image of God. It is important that Christians understand equality from the perspective of the image of God. To grade humanness is to grade the image of God. Designating some people as more human than others is an awful worldview. It is such worldviews that led to regrettable global occurrences such as slave trade and the holocaust. At a community level, the grading of women as sub-humans leads to sexual and domestic violence.

Women have endured a lot at the hands of oppressive systems. They have lost many opportunities. They have been bypassed because of the label “weaker sex.” From the exploits of women today, it can clearly be seen that such exclusion was uninformed and unfair. Given this generational misconduct, it would be in order for various institutions to apologise and repent for the sins they have committed against women.

Even governments owe women an apology for years of discrimination. Champions of women’s rights have suffered. As prophets speaking truth to negative masculinity, they stood up against systems that relegated women to a lower human status. Initially, it was mission impossible but now the fruit of the fight is undeniable. It is becoming increasingly difficult to sustain a Bible-based narrative that women are inferior. Women are definitely different but certainly whole. They are in the image and not the shadow of God. While the Old Testament has accounts that accord women a subordinate status, it has equally powerful narratives that position them as warriors and king makers.

It is interesting that Jesus spoke mostly about “all”, a totally inclusive narrative. The miracles he performed for women not only met their needs but transformed their identity and positioned them anew in the community. The nature of the gospel is such that it affirms the fullness of life for all. An attempt to affirm a culture that makes the woman’s image diminutive while preaching a freeing gospel makes Paul the apostle appear contradictory. What is unquestionable is that Jesus demonstrated and expressed great value in women.

The continuing degrading of women in the contemporary church restricts their access to some roles and positions. Women may be worthy Christians but some spiritualities deem them to be permanently short of full humanness. To these churches, full humanhood is gendered as male. The church thus continues to throw mixed signals on the matter of the place of women in God’s service. Traditional marriage vows insist on the wife submitting to the husband.

More progressive churches have reinterpreted submission to teach a two-way understanding. Still, the Good News champion carries some bad news when it tells women that there are top positions labeled “Men Only.” Women resort to moving away from such churches for them to access top leadership. It is important that the church reconciles its contradictions on the place of women in the world.

They must be freed to speak in their own words and paint the world in their own colours. Their story should not be subjected to editors who manipulate the image of God in women. 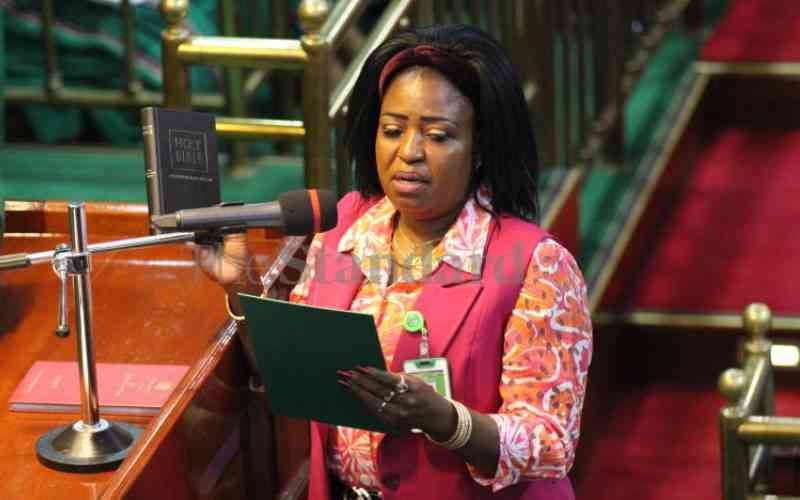 What we must do to step up women leadership
Opinion
By Izel Kipruto and Antony Mbithi
4 months ago
.