Supreme Court will today hand its verdict on Building Bridges Initiative (BBI) secretariat’s quest for a referendum to amend the Constitution.

After two months of waiting, a seven-judge Bench will either give life to the referendum push, or pull the plug on an initiative that united the former Prime Minister Raila Odinga and President Uhuru Kenyatta.

At the heart of the case before the highest court in the land are four points raised by Attorney General Kihara Kariuki and Independent Electoral and Boundaries Commission (IEBC).

The first issue is whether the BBI process was legal or not and is the Constitution 2010 amendable or not.

At the same time, the court will determine whether the president’s participation rendered the whole exercise moot and if he enjoys absolute immunity.

IEBC quorum will also either tilt the scales of justice in their favour or spell doom for the pro-BBI team. The fourth issue will be if the court has powers to intervene in a referendum when the commission has verified one million signatures.

According to him, there was no evidence that the BBI was meant to benefit the elite. Instead, he said, the initiative was meant to cure tribalism, incessant corruption, and ensure equity.

At the same time, AG’s team led by Solicitor General Ken Ogeto argued that the president did not initiate BBI although he had a right to do so as a private citizen.

“Even if the Basic Structure Doctrine was applicable in Kenya (which we dispute), the absence of clarity on what the basic structure is, would create much legal and constitutional difficulty. This is a matter that we humbly urge this court to clarify with finality,” argued Ogeto.

Kamau Karori, the AG’s other lawyer, urged the court to let the people decide. According to him, courts have no powers to limit the right of Kenyans to decide whether to amend the constitution or not.

The judges will also determine whether the court had powers to reverse the will of the people. Ogeto argued that the referendum bill involved engaging Kenyans and gathering more than 1 million signatures in support of the BBI.

This, Ogeto said, represented what the people wanted.

Opponents of the BBI asked the Supreme Court to stop BBI by upholding decisions made by the High Court and Court of Appeal, whose judges ruled that sections of the Constitution targeted for amendment can’t be changed.

David Ndii, Jerotich Seii, Jane Ngondi, Wanjiru Gikonyo and Ikal Angelei asked the court to find that the intention of the BBI brigade was to alter the 2010 Constitution. 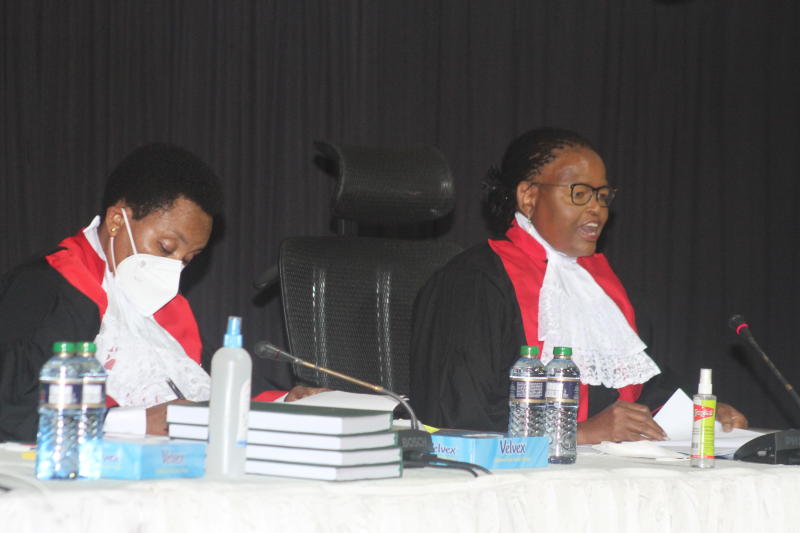 Judges give more time for parties, ‘friends’ get none
Lawyers say time allocated to each was not enough and asked for more. Judges said not everyone could make oral submissions, locking out Karua.
National
By Kamau Muthoni By Kamau Muthoni
8 months ago
.