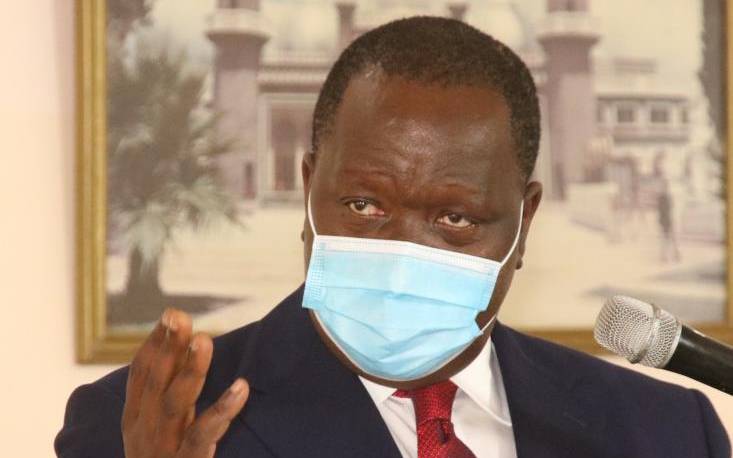 The government will support religious leaders in ensuring that they stream their services or safely meet in small groups for counselling and prayers.

This will form part of a joint effort between the government and the religious leaders in ensuring that people adhere to the Covid-19 health guidelines, Interior Cabinet Secretary Dr Fred Matiang’i has said.

Dr Matiang’i (pictured) said that religious leaders are crucial in the fight against the coronavirus because of their influence in the places of worship which attract many people.

He spoke at a meeting where he, Education CS Prof George Magoha and Health CS Mutahi Kagwe met religious leaders for a discussion on response against the virus.

Dr Matiangi said that President Uhuru Kenyatta had instructed them to engage the faith-based organisations in marshalling support for the campaign against the pandemic. Two religious leaders were picked to sit at the National Emergency Response Committee (NERC) on coronavirus.

Dr David Oginde, a clergy from CITAM Church, lauded government's efforts to involve the religious leaders saying that they (clerics) have also been playing crucial roles in providing psychological support to the people.

“We have been doing our part to ensure that our people remain spiritually nourished. We are providing psychosocial support to those people who need that kind of support.,” he stated.

He further revealed that faith-based leaders were also working to support those with material needs like food and house rent.

In the daily Covid-19 press briefing Health Cabinet Secretary Mutahi Kagwe also re-iterated that the government was teaming up with religious leaders to fight the virus. Mr Kagwe said that the clergy are pertinent in the fight against the pandemic owing to the influence and regular communication with the people.

He urged them to continue passing the health safety messages to their believers adding that it would take a joint initiative from various players to defeat the bug.

Today, 80 people tested positive for the virus bringing the total number of cases to 1,109. Nine people recovered from the disease and were released from the hospital.