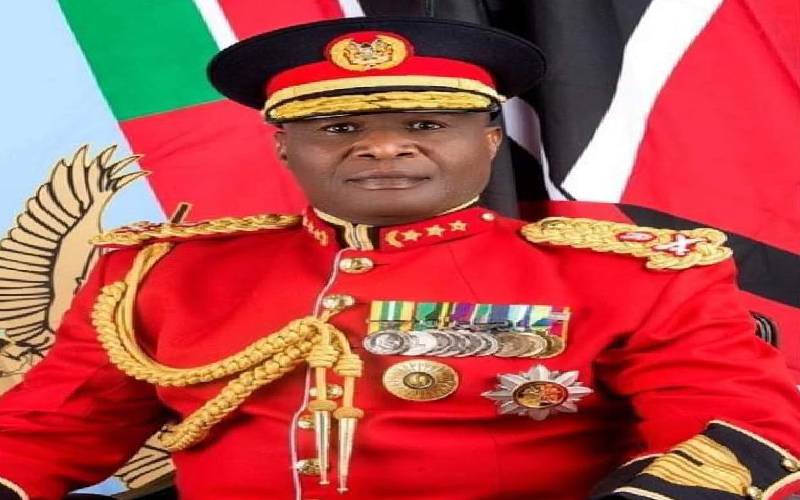 General Kibochi takes over the leadership of the Kenya Defence Forces (KDF) from General Samson Mwathethe who retired after serving as CDF for five years.

Previously, General Kibochi, who was accompanied to State House by his wife Mrs Tabitha Kariuki, served as the Vice Chief of the Kenya Defence Forces.

Speaking during the ceremony, President Kenyatta commended the KDF for upholding merit and professionalism which he said has enabled the institution to have a predictable and stable career management system for its officers, servicemen and women.

Jumwa lawyers storm out of court after charges are amended

“I commend the Cabinet Secretary and the Ministry of Defence team for ensuring a seamless transition. This signals our maturity in governance and a strong belief in the civil transfer of power, as envisaged in our constitution," the President said.

Saying the established military succession system underscores the value of rules and procedures, the President called on other government institutions to emulate the standard as a best practice.

The Head of State exuded confidence that with commitment and determination the new military top brass led by General Kibochi will protect and defend the territorial integrity of Kenya even as the country deals with modern security challenges and other natural occurrences.

“I am confident that you will steer our Defence Forces with steady hands. You take over from General Samson Mwathethe, who has served this nation selflessly, with loyalty and dedication.  I expect no less from the incoming team and neither do the citizens of this country.

“You are taking the mantle of leadership at the KDF at a time when the country, region and the world are confronted by a number of threats and risks.  Apart from the terrorist threat that faces us, we are confronting Covid-19, the floods, and the locusts’ invasion," the President told the new CDF.

The President thanked General Mwathethe for his exemplary service saying the retired CDF had served the nation selflessly, with loyalty and dedication.

“General Mwathethe, as you revert to being a civilian, as a retired CDF, you must do so with pride because you have served well.  I also hope that you will remain available to your colleagues, whenever they may need your counsel,” President Kenyatta said.

As part of their contribution to the national fight against Coronavirus, KDF donated Sh102 million to the Kenya Covid-19 Fund, money raised from voluntary salary cuts within the military.

By Jacinta Mutura | 19 hours ago