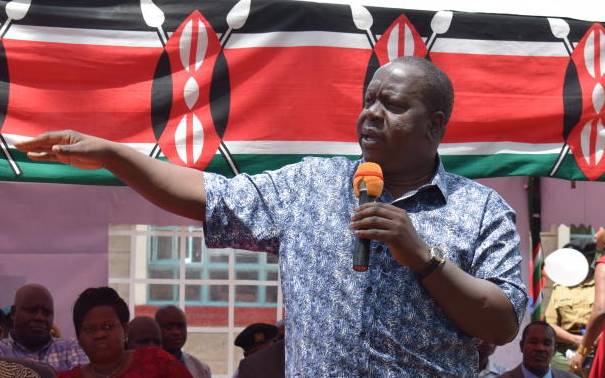 Interior Cabinet Secretary Fred Matiang’i (pictured) has vowed to take action against police officers who were caught on camera kicking and bludgeoning Jomo Kenyatta University of Agriculture Technology (JKUAT) students during a protest against insecurity. Matiang’i said he had spoken to Inspector General of Police Hilary Mutyambai and agreed that, within the next 24 hours, firm and decisive action shall be taken against any officer who used excessive force.. He said he had observed the events at JKUAT with profound concern and that the use of force by police is clearly outlined in the National Police Standing Orders.

Mutyambai said he had directed the Internal Affairs Unit to commence investigations and make recommendations for action within hours. “Any police officer found culpable will be held accountable,” said Mutyambai on Tuesday morning. He said the incident happened when police responded to restore law and order after the riotous university students blocked the highway harassing motorists and all road users. Mutyambai said all police officers have gone through rigorous and professional training on the management of riots and unlawful assemblies. “Officers have also been trained on the need to respect human rights and fundamental freedoms and that use of force must be legal and of necessity to the needs of justice. It must be applied to the extent that it remains proportionate to the gravity of the offence and with full accountability,” said the police boss.

SEE ALSO: CS to testify on bid to revoke sub-county

He added every officer is guided by the foregoing principles and will take individual responsibility in case of any violation. This comes after numerous videos went viral online in which the officers are seen bludgeoning and kicking the students way after the demonstration had ended and the institution closed. The Independent Policing Oversight Authority (IPOA) has already commenced investigations into the brutality. JKUAT Deputy Vice-Chancellor of Academic Affairs Prof. Robert Kinyua, said the Senate had in a special meeting resolved to shut down the institution following student unrest on Monday.

Prof. Kinyua further directed all students to clear from the campus by mid-day on Monday. The institution’s main campus students earlier took to streets in protest insecurity in the area. They blocked the Thika Super Highway  before more reinforcement was sent to disperse them. They engaged Juja Police officers in running battles accusing them of not doing enough to protect them, further accusing local Boda Boda operators of colluding with criminals to rob  them. Amnesty International Kenya said excessive force was used on students in the protest. “Violent police betrays every officers oath of service and must be condemned,” it said.