?The buck will now stop with the Officer Commanding Police Station (OCS) as the new command structure of National Police Service takes shape.

The changes, unveilled on Thursday mark the end to the monkey business conducted in stations where parallel leadership structures often obstruct the process of obtaining or dispensing justice.

In the reformed structure, the OCS will unilaterally preside over a station and all its facilities like vehicles, police personnel and equipment. With a clear leadership structure, it also means that no officer will abscond duty or ignore orders on the pretense that he is answerable to another boss. 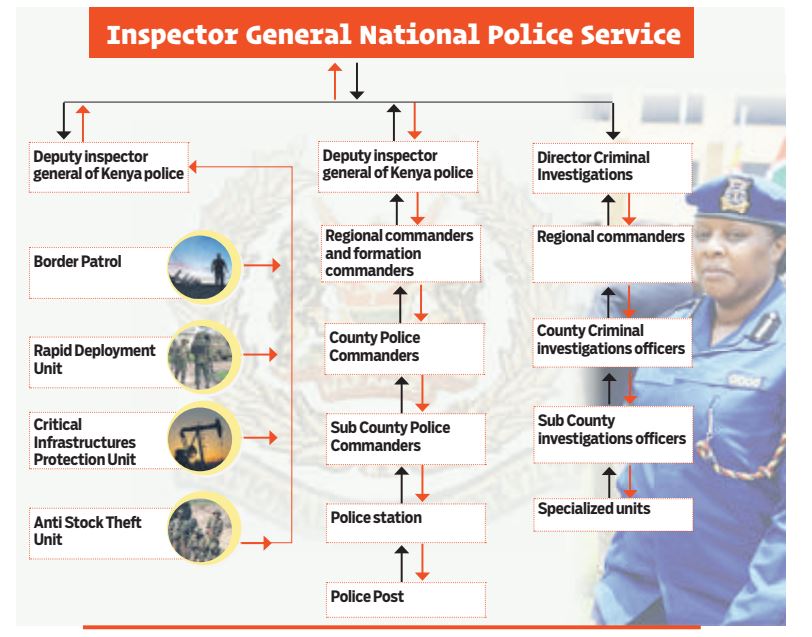 “Clients seeking services should be prepared to encounter a neater, happier personnel, because most of the confusion you see in stations right now is a result of pent-up anger arising from the things we are addressing,” a senior police officer told Sunday Standard.

In the current order, when an Administration Police (AP) officer makes an arrest, he has to hand him over to a regular police officer because they do not have holding facilities. They also cannot take them to court directly.

“In the process of a handover, so many things can happen, and indeed they happen. In the new structure, there is nothing like an AP, all officers will fall under the OCS. The public should also expect improved access to police services as more officers will be deployed to general duties,” the source said.

Another defining feature of the reforms is that the officers will now live with the communities they are supposed to police. This is meant to bring police officers closer to their communities and to enforce discipline as they can no longer hide in exclusive police lines.

Only officers from the rank of Chief Inspector of Police to the lowest rank of Police Constable and who are under the National Police Service Commission (NPSC) will be redeployed.

However, some of those above the rank of Superintendent of Police who are under the Public Service Commission (PSC) and whose positions have been scrapped might be absorbed in other departments in the public service.

The challenge will be how to harmonise the ranks with many APs being promoted to higher positions after completion of the degree studies. Their counterparts in the National Police are never promoted after obtaining degrees.

While police recruits undergo the Penal Code training, their AP counterparts have never been inducted, making them unable to prosecute cases.

Security expert Simiyu Werunga says the reforms are well thought out. He added that the changes were long overdue as they are part of the raft of recommendations made by the Justice Philip Ransley-led taskforce in 2009. The taskforce was appointed by the late Internal Security Minister George Saitoti to make the police service better.

“These changes are not new. They have been discussed and carefully thought out based on the report. The delay was occasioned by internal wrangles between the Regular and Administrative Police, taking the matter in circles,” Werunga said.

“We will now have one port of call whether from the police posts or the chiefs. The buck stops with the OCS. Presently, people are being taken in circles with each officer claiming to report to a different boss.”

Vehicles previously under-utilised within the AP ranks will now be under the OCS. President Kenyatta put the number at 5,000 countrywide, with half being on the leasing programme.

AP patrol bases, posts and stations will now be furnished with Occurrence Books (OBs) to allow them record cases. But how will an AP officer book an occurrence in the OB without training?

NPS will have to train all APs on legal implications of their actions before they are fully integrated into the general duty police work.

“We have the political good to execute the reforms now. All those changes that require political support can now be effected, “ Werunga said.

The President put on notice Kenyans who under-estimated the powers of the APs. “If you thought the APs cannot arrest you, now you know they’ll even charge you in court,” Uhuru warned when he launched the reforms on Thursday.

All AP officers who do not perform core duties like border patrol, anti-banditry and security of government buildings will now be deployed to patrol.

The assigning of AP officers to private duties like escorting Cash-In-Transit vehicles from where senior officers have been siphoning the allowances will now be under the OCS.

“We will have a centralised command centre and leadership. The OCS will have a lot of vehicles at his/her disposal to deploy officers and resources,” he said.

The OCS’s mandate will be expanded to include ward commander commanding police posts and patrol bases within their respective areas of operations and providing support to the National Government functions.

This makes the police station the centre of policing service delivery under the OCS with more police officers under his command.

After the merger, the number of police officers performing general duty services will be 64,252.

These changes are also expected to instill discipline in the service. It will solve regular standoffs where AP officers refuse to take orders from their Kenya Police Service commanders during operations.

Security consultant George Musamali says the changes are in line with the 2010 Constitution and the 2012 Police Act.

But the reforms have also raised issues of constitutionality especially on the merger of the KPS and AP, with some quarters saying it is in breach of the Constitution.

The Constitution stipulates that there will be a National Police Service and the Administration Police. Activist Okiya Omtata has already filed a suit to challenge the reforms. Rarieda MP Otiende Amollo has also faulted the president for approving the changes.

“Any changes can be done through a constitutional amendment or policy paper adopted by Parliament. Deploying a number of officers for various tasks weakens the AP,” Otiende warned.