I have said it before, and will do so here again — no nation, or people, have ever become great without a great elite. Countries are only as great as their elites. Several states in Asia — South Korea, Malaysia, Singapore, Vietnam, Indonesia, China, Japan, and India — are Exhibit A.

Even North Korea — in spite of being ruled by a dynasty of a megalomaniacal family of dictators — has proven that a tiny state can exert power on the global stage. Not every lunatic can do what test-tube dictator Kim Jong Un is doing — unsettle and paralyse the great United States into a checkmate. That’s why I want to interrogate the cancer of corruption, and how it stunts states. My definition of corruption isn’t boilerplate.

Let’s take South Korea as a singular illustration of my thesis. In the early 1960s, South Korea was as underdeveloped — and backward — as Kenya, or Ghana. But in three decades, South Korea became a top-15 global economy where Kenya and Ghana remained mired at the bottom of the heap. South Koreans over 50 years of age have a faint memory of unheated huts, earthen floors, and muddy roads.

Life expectancy, literacy, per capita income, and other indexes of development are among the highest in the world. In Kenya and Ghana, we still labour with jiggers, cholera, a high infant mortality, malnutrition, and other Ebola-like pestilences. Nairobi, our nerve centre, has open sewers and no subway system. At peak hour, it takes hours to get to JKIA from downtown.

Our towns have no pedestrian walkways or bike paths. When our leaders get ill — even when a teargas canister from the police state hits them — they run to South Africa to get an eye patch. Some of our best brains were either exiled, or left the country out of frustration. As a people, we should collectively sit in our toilets and sorrowfully cry for our beloved country. We pay MPs forty times what we pay teachers.

In spite of these grim facts, Kenyans act as though the country is normal. On the government side, tribalist dwarfs — even in the deepest remotest village in the Rift Valley and the Mount Kenya region — defend Jubilee with a venom reserved only for the deadliest of enemies. On the NASA side, ethnic partisans in Nyanza, Coast, Western, and Eastern — howl the bitterest epithets against the status quo.

The point isn’t whether one side has a vision for Kenya, or not — it’s about whether my tribal kin is in power, or can capture power. This is what I call the cancer of corruption. I am not talking about the corruption of money and material goods. No — I mean the corruption of the collective national soul.

Let’s go back to South Korea. The country was a pivot of the cold war — as was Kenya. But the South Korean elite leveraged their cold war servitude to develop. Kenya didn’t. I agree the South Korean generals who ruled it before the masses forced a political democracy on them were deeply corrupt — materially and in their souls. But they had a national mafia-like pact driven by an overriding national interest — to yank South Korea out of the dark ages. The elites agreed among themselves that you could loot — but only up to 10 per cent of a deal. The rest had to be re-invested into the public economy.

In Kenya, the reverse has been true — the elite have agreed that they will loot 90 per cent, and only reinvest 10 per cent in the public economy.

If Kenya were a human body, it would be in rigour mortis. As a political society, our soul is dead— no heartbeat. The people who sit atop the state are known looters and plunderers. Their public immoralities are legion. To them, the state is only useful as an instrumentality for looting and safeguarding the loot.

That’s why the filthy rich are in politics — to protect their ill-gotten loot. You can count on the one hand the politicians who are in power to serve the public. Yet the overwhelming majority of Kenyans will give their lives for their thieving tribal barons.

Democracy has failed to deliver us from our demons. As Winston Churchill said, “the best argument against democracy is a five-minute conversation with the average voter.”

French thinker Joseph de Maistre said, “In a democracy, people get the government they deserve.” Kenya is a democracy however fledgling and illiberal. We shall wander in the wilderness until the voters and the elites discover a national interest bigger than tribe and corruption.

The first phase of devolution is coming to an end but the journey to self-governance, public empowerment and universal public services has just started. 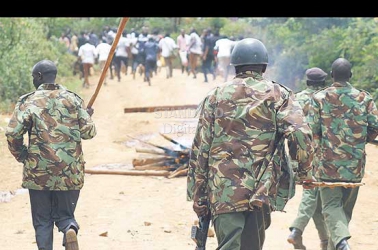