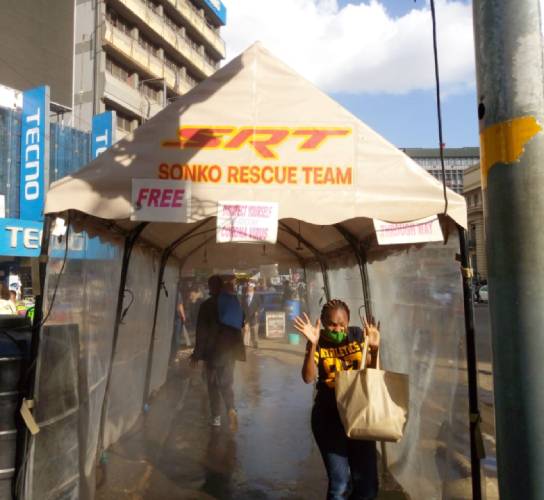 You will find Covid-19 disinfecting booths pitched strategically in designated parts of Nairobi City.  One by one, people stream in and out of the tent. Women cringe, men strain to maintain a straight face as the cold misty spray from jets emanating from the walls of the tent, with disinfectants hit them gracefully.  After watching for a minute, I also decide to jump in. At first, I too recoiled like a snake as the spray engulfed my body. I span around to get an even coat. For a few seconds, I am covered in a blanket of mist, swooping, and skirting all over my clothes.

Several other people are behind me, keeping some distance. Others think otherwise. They turn away. From a distance, we looked like cows in a ranch, filing, ready to go through a cattle dip. All of us line up for this anti-coronavirus wash.  Afterward, everyone went on with their own businesses. Confident of having been fully armed against the Covid-19. Others, idle, decide to take a walk in and out regularly. You would say, a safe way to be idle.   The walk-through sanitizing booths are the latest arsenals employed in the fight against the coronavirus in the city of Nairobi.  The Sonko Rescue Team booths have stood the battles in and out of court, in the quest to combat the lethal virus.  Despite the cringy experience, the booths have been very critical in putting a spirited battle to keep Covid-19 at bay.  “We hope that the booths will be an element in combating Covid-19. We have stationed them in town for free so that the passersby can sanitize themselves, “said Ben Mulwa, the Personal Assistant for Governor Mike Sonko.

However, the wrong use of the booths has had people throw caution in the air. Many disregarding other Ministry of Health guidelines as a result. While Public Health officials have belabored on social distancing, sanitizing, and wearing of masks, some after using the booths leave, with the impression that they got a comprehensive insurance cover against Covid-19. “While fumigation is good in killing the pathogens on clothes and other parts of the body, users should be keen not to flout other rules. Fumigation is fumigation. It is not a substitute for maintaining social distancing or washing hands with soap and water,” says Kepha Ombacho, the Director of Public Health.  While Dr. Ombacho acknowledges the role played by disinfection, he advises that the users must observe all other guidelines put down by the World Health Organization in leveling the Covid-19 curve.  “It is actually worthwhile to sanitize your hands before or after getting into the booth. This will make sure the user is fully safe after the spray” adds Dr. Ombacho

The Nairobi County has erected over 100 such booths in the city. Most of them are located in the slums, which are emerging to be the epicenters of the coronavirus.  However, some booths were vandalized, a few weeks ago during a power struggle on who controls the capital, between the embattled Governor Sonko and the Nairobi Metropolitan Services.  “We had put up 19 booths in town but four of them were pulled down. However, we are working towards reinstalling others. These booths are crucial to fighting Covid-19 as one is able to disinfect not just the hands but clothes, shoes, and other parts of the body that might not have otherwise been sanitized,” elucidates Mulwa.  Recently, a row emerged after some of the booths were allegedly destroyed by the police. However, the High Court ended the battle by stopping the demolitions. Similar booths have been erected elsewhere in several other places in the country. Mombasa County Governor Ali Hassan Joho, established auto-sanitizing booths in busy public places, in efforts to prevent the spread of Covid-19.  At the Likoni ferry channel and Kongowea market, residents simply walk through the booths as strategically placed jets sprays them with disinfectants, sanitizing up 400 people in 10 seconds. Mombasa County Communication Director, Mudathir Ahmed, said the booths were installed jointly by the Hassan Joho Foundation, Suleiman Shahbal Foundation and Technical University of Mombasa to mitigate against coronavirus. “The Hassan Joho Foundation is in the process of installing additional 10 disinfection booths in all busy places such as markets and bus stages with a capacity to disinfect up to 400 people in 10 seconds,” said Ahmed. The Ministry of Transport has also taken a cue from other users. Recently, the Cabinet Secretary for transport launched the booths in select termini in the country.  Transport CS James Macharia said the tunnels emit enough fog by releasing tiny droplets of disinfection which covers 95 percent of the body mass in seconds. “As you are aware, the COVID-19 pandemic has brought about losses in terms of human life and the country’s economy. It is the aspiration of the Government to ensure that Kenya overcomes the pandemic soon and bring the situation back to normalcy. We are happy to see such initiatives being rolled out locally,” explained CS Macharia.   The same has been replicated in other parts of the world. In Johannesburg, South Africa, commuters have been cited squinting in ques to have a chance to get a fog for safety, before jumping into a public service vehicle.