When your husband is a KDF soldier: Wives speak out

Maureen Auma, 30, is busy taking her children through school assignments at Kiratina estate in the outskirts of Nakuru town. Her youngest child Samuel Owour, 5, rushes outside to play with his friends but comes back a few minutes later crying. He has been beaten by a playmate and vows to tell his father about it when he returns.

“Nitaambia daddy akikuja, nitaambia (I will tell my daddy when he comes back),” he says amid sobs. Auma, in deep thought, has no words to console her son, because the father he is talking about, Joseph Owour Bonyo, was among the Kenya Defence Forces (KDF) soldiers who died during the El-Adde attack in January last year. The mother of two, who is yet to come to terms with the death of her husband, expressed her fears of bringing her son to terms with his father’s death. “My son is not aware of his father’s death and I am not ready to inform him because he is too young to understand,” the teary eyed widow told The Standard team during a visit to her house.

Auma met her husband in December 2005 and they were blessed with two children aged five and ten. She remembers Bonyo, who was attached to the Eldoret Kenya Rifles unit, as a loving, caring and responsible father and husband.

The couple met in 2001 during a science congress competition held at Onjiko Secondary School in Ahero, Kisumu County. Auma was in Form Two while Bonyo was a Form Tthree student. 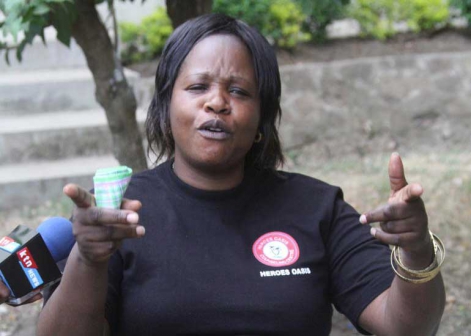 “After that initial meeting, we continued to stay in touch and would meet severally during other education trips and competitions. However, after high school, we each went our way. Bonyo was recruited by KDF while I engaged in small businesses to earn a living,” she said.

Someday, in 2005, Auma was shocked when Bonyo made a surprise comeback. He had graduated and had just been posted to his new work station at 81 tank battalion at Lanet Barracks. He proposed marriage and they started living together at the barracks and Bonyo did not disappoint as he remained loving, caring and committed.

“My husband loved me and the children very much. I remember the last outing we had at Chaka Ranch where we spent a lot of time together discussing our future and planning for our family, not knowing that would be the last time we would be together,” recalls Auma tears rolling down her cheeks.

News of the attack that took her husband’s life were relayed to her via the media. Auma says she communicated with her husband via Whatsapp at around 3am that morning. “Once we learned that there had been an attack, everyone started asking me about Bonyo and I only got to know that he was among the dead from local TV stations,” she says.

While trying to come to terms with the loss, Auma’s extended family was busy looking for a man to inherit her and this forced her to flee the ancestral home. Land sold Further, her in-laws sold her two parcels of land in Kabondo area claiming she had received compensation from the Government and had not shared the money with the larger family.

Compensation logistics are however, ongoing and she is currently only receiving Sh12,000 monthly pension. She does crocheting to supplement her income.

According to Jennifer Aluoch, 43, Kenyans do not appreciate efforts made by their soldiers in protecting them against attacks. “As an act of appreciation, we need to have a prayer day bringing together the President, families of soldiers and various clergies to pray for our soldiers serving in various missions,” she avers.

Aluoch’s husband is currently on assignment and for security reasons we cannot disclose his name or where he is located. Aluoch says her husband proposed to her and they got married in 1995 and have been blessed with three children 20, 13 and 10.

“When he first proposed, I was reluctant but having grown up in a soldier’s home, I agreed to the marriage and we have lived happily because he is a loving man, who listens a lot and a good father.

Narrating her experience as a soldier’s wife, Aluoch said despite having been married for 20 years, she has only been together with him for at least eight years because most of the time he is on assignment inside and outside the country.

She said two months after getting married, her husband traveled outside the country leaving her pregnant. He came back when the child was three months old and soon after had to leave for Eritrea and Somalia for a peace mission.

She says as the wife to a soldier, one has to always be strong because everyone, including his parents, will want to know their son’s whereabouts yet she does not have any information. “There will also be days when you really need to talk to your husband but communication is impossible. It is easy to, at that time, develop anxiety or get depressed especially when everyone keeps asking you about him.

This is when you have to seek God’s help because only He understands the situation,” she states. Then there is the added challenge of handling a soldier who has come back home from the battlefield who Aluoch says will often have undergone a character and behaviour change.

“As the wife to a soldier, I need to understand my husband when he comes back. He is normally so secretive and will often wake up at the wee hours of the night horrified. It is not easy to handle this and yet I must learn how to do so,” she says. Aluoch says the only way to survive is by joining support programmes where wives and families of soldiers can get to share their different experiences and encourage each other.

As a young woman and wife, Judy Adhiambo says the greatest challenge about being a soldier’s wife is loneliness. Adhiambo got married in 2012 but has only stayed with her husband for just two years since, the rest of the time, he has been on a peace mission outside the country.

The mother of one says she has learned to develop a thick skin and take care of emerging issues alone including having to deal with the loss of their first born child, in 2013, all alone. “How do you call someone who is in the battlefield to inform them of some challenge you are having?

You have to be self-sufficient and also play the role of a mother and father to your children,” she says. Adhiambo says the best way for the government to appreciate fallen soldiers is to come up with an education scheme that ensures their children remain in school.