Changing the world one swimmer at a time: Ayub Osoro’s passion as a certified lifeguard

Ayub Osoro, 46, is a father, a certified lifeguard, a swimming coach and passionate swimmer based in Nairobi’s Eastlands. He talks about how he uses the sport to bring out the best qualities in the young people and why he is determined to spread the influence:

Dealing with teenagers can be quite overwhelming. How do you manage as a swimming coach at Buruburu Girls’ School? What’s that like?

It’s true. This is a trying age where they are trying to cope with growing, education and other life-changing events. To be their coach means you have to understand them and keep all these in mind.

Coaching to me doesn’t only mean swimming drills but also nurturing them and encouraging them to take up a sport that will benefit them.

Today’s society is marred by many vices. The youth are known to sometimes get in the wrong side of the law. Do you have a plan of assisting the youth to keep off trouble?

I love the saying that “If you don’t practice a healthy lifestyle you die at 25 and you’re buried at 70.” I plan to make swimming the norm rather than an exception to these young people.

I would like to teach them that even at a young age, they can take up swimming as a hobby so that even when they are older, they will still appreciate it and it will take them to better places.

By 2030, I would want Kenya to be a drown-free country; this means that 75 per cent of our youth should have learnt how to swim. I plan to start an initiative that will spearhead these programmes. I believe that these development projects will save the society and banish these deeply rooted vices.

Before you came to Buru Buru Girls, you were coaching at Umoja One Primary School where you led their first swimming team to a gala at Makini School. What was that like?

I was a volunteer coach at the school. I formed the Umoja Sharks Swimming Club for the children. I would train them during the holidays and in the mornings and evenings during school days. I saw a significant change in the kids’ lives.

The weather in Nairobi is quite chilly at the moment. Would you advocate for swimming in these conditions?

In this weather, most swimming pools don’t even operate and yet it’s one of the best seasons for swimming. Swimming is one of the best fitness regimes and a swimmer is always alert. Contrary to what most people think, the pool water actually isn’t that cold especially if the base is made out of cement.

It can’t make you sick. However, it isn’t advisable for people who suffer from chest diseases such as asthma to swim in cold weather but the rest can swim. But I have noticed that the cases of such diseases are increasing due to the lifestyle that people are adopting. 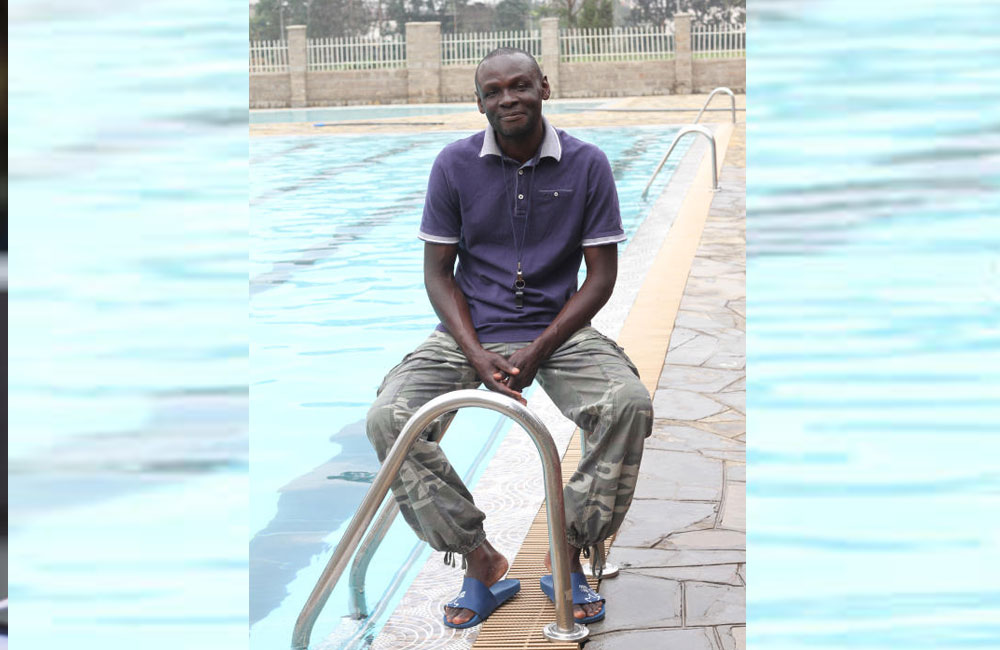 Would you advise someone to take up swimming as part of their fitness regime?

Yes, I would highly recommend it. It’s actually one of the best fitness regimes. An avid swimmer has to maintain their health at all times. This is because swimming dictates that you eat a balanced diet and you keep out of vices such as smoking and drinking which reduce your lung capacity.

A swimmer will always remain healthy just to maintain their passion. Swimming as a sport helps young people gain self-esteem and improves their overall health and development. A competent swimmer can never get into crime or early marriages and pregnancy because they know their bodies are capable of doing something great.

You attended the YMCA Lifeguard Course which is among the best in the country. How did you manage to pay for the course and yet you came from an underprivileged family?

By the time I was 20, I was determined to be successful in my lifeguard career and I knew that this course was the way to go. I managed to save to pay for the six-month course in 1992. The course was quite exhaustive and I got to learn First Aid and CPR.

The lifeguard course includes a preliminary course where you have to swim several laps continuously; it’s almost like training for the Olympics. This makes you fit and you get to build your stamina in the swimming pool. By the end of the six months, you would have learnt various vital decision-making skills that relate to the aquatic environment.

I have Level 1, 2, 3 and Elite Swimming Coaches Certificates. I also have certificates from The Kenya Life Saving Federation - KLF.

Most young people tend to want to take some time off after they finish school. Some of them are not even sure about the direction their lives will take after high school. What prompted you to join the lifeguard course as soon as you completed school?

I started swimming at a very young age. We used to live near The Nairobi Club and almost all kinds of sports can be found here. I would make sure that I go to the swimming pool at The Railway Club practically every day after school.

Their swimming pool was completed when I was in Class Five and this is when I fell in love with swimming. At first, I would only manage to float in the water but later I learnt various strokes courtesy of a guy named Fredrick Wabara.

I remember it was him who planted the seed of being a lifeguard in me. He encouraged me a lot and I will never forget the role he played in my life.

How did you land your first professional job after the course?

As soon as I completed my course, I visited various travel agent offices. I came across a brochure that was advertising a lifeguard job at The Indian Beach Club in South Coast and I applied. When they contacted me, I couldn’t believe it and once I was employed, I got really motivated to work even harder.

I have also worked at The Sun n Sand Hotel, Tribe Hotel and many other notable establishments.

Travelling all the way to the coast and yet you were quite young, how did your mother feel about it?

My mother was very encouraging. She was elated because I had identified my career early and I was following it up. My dad died when I was 13, and she raised us alone. The fact that I concentrated on my passion meant that I didn’t take up drinking or drugs and other time-wasting vices with the rest of my age mates. This made her very proud.

If you hadn’t pursued a lifeguard or a coaching career which other areas would you be indulged in?

I would be practicing another form of competitive sport such as boxing or football. When I was young I used to juggle all of them. However, I realised that swimming provided me with an awesome opportunity for making a living and that’s why I decided to venture fully into it.

What does your family think of your job?

My wife has always been OK with the career moves I have made. My current job has not affected her in any way. She knows me well and she can discern that I’m passionate about coaching the youth and helping them better their lives. I had gotten a lifeguard job in The Middle East before I started coaching Umoja Primary, but I left the post after working for less than six months because of my family. I have a son, 26, and a daughter, 20, and a ten-year-old son who is quite a swimmer.

What is the secret to swimming well?

The secret is floating by surrendering to the water and allowing it to carry you while maintaining your balance.