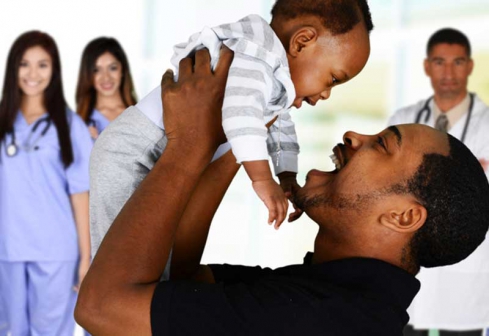 There are days when her temperature could rise to 41 degrees but she could still afford a smile and a giggle here and there. This alone gave me the push I needed in nursing her. She ended up being a darling of many patients and doctors. Even with a nebuliser on, she would still sing ‘Baa baa black sheep’ as she shook rhythmically. One time, the doctor called me aside to tell me her health was deteriorating but I smiled and told her to sit back and watch my baby fight back to being healthy because of the positive attitude she exhibited.

Anyway, that aside. Today, I am actually here to tell you how much I am disappointed in our men, or is it our husbands? Can they explain why they pitch tents in hospital wards and yet get irritated by the slightest of noises? I mean, if you have made the decision to be at your ailing child’s bedside, at least express your willingness to accommodate the patient. You know, as I was nursing my daughter, I had the opportunity to mind other people’s businesses as well. I mean, what else was I supposed to do when baby was asleep for hours yet I have no husband to argue with. So I ended up sharpening my eyes and ears and ‘elasticated’ my neck so as to see everything and anything.

During my little ‘research’, I found out that men in the wards got irritated so easily that they ended up spending more time out in the sun or watching television in another room instead of helping their wives nurse their children. Anytime a child would cry, all the men shrugged irritably, mumbled and strolled out of the wards claiming the place was noisy. I sat there wondering, did they expect the children to vibrate instead? I mean, what would one expect from a child in pain -- dance moves? What’s the point of being there when you aren’t really there? Were you brought there at gun point? For a moment I thanked God my husband wasn’t with me at the hospital because I would have made him the next patient if he walked out on us. Not that I have a husband, I am just thinking aloud. Let no one remove me from the list of single women.

Dearest husbands, by the time you decide to help nurse a sick child, be ready to change diapers, smell pee and exercise the potential of your eardrums. You cannot expect to show up in a farm and refuse to get dirty. If you can’t stand the heat, get out of the kitchen, no one has kidnapped you. You have very short memories by the way. Aren’t you the same people who act like you have been struck by lightning when you are having a simple cold? You coil yourselves in bed like millipedes, breathing through your mouths and behaving like one foot is already in the grave. Have you ever seen us taking off claiming you are a big burden? Actually, let me say it today, men who behave like the ‘walking dead’ when they have a mere cold are a pain in the A double Snakes! Given a chance, we would abandon you and go shopping, but because we love you unconditionally, we sit by your side and nurse your cold till you are strong enough to go and join ‘the boys’. For that reason, I humbly ask today, okay wait, did I just say ‘humbly’? Let me rephrase, I demand that you behave yourselves when nursing your ailing children!