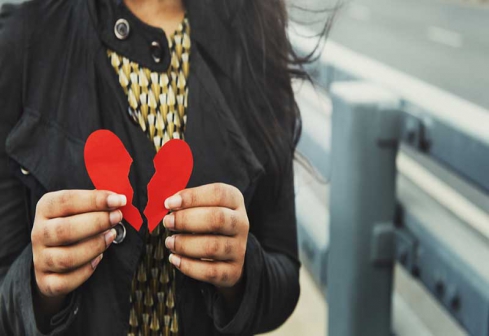 Breaking up or divorcing a partner can be such a messy affair. Michael Owuor examines some of the wacky circumstances and excuses some lovers give their partners before ending their relationships and marriages

Some individuals, especially men, in unhappy relationships and marriages find it extremely difficult to break up or divorce respectively. And even if they have the guts to do so, how they go about it is plain ridiculous. In most cases, partners unable to terminate their unions amicable either start to play 'hide and seek', abscond from responsibilities (rationing or denying each other conjugal rights and all), cheating or simply go silent on their partners.

However, 'lucky' to-be exes are at least given excuses. Unfortunately, some of the excuses given or grounds on which some partners dump or divorce each other each other range from flimsy, crazy to others which are downright silly! Were they unhappy in the relationships or marriages and were just waiting for any reason or excuse, however stupid and flimsy, to exit? One may wonder.

Some become stunningly petty, crazy and others exhibit immature behaviours that would make an average 5-year-old child embarrassed on their behalf.

Take the case of Rose Mwende whose boyfriend of six years dumped her through his mother. Needless to say he was 28 years old. Apparently, her boyfriend, a mama's boy, had introduced her to his mother with whom they became too close.

"We (Rose and her boyfriend's mother) become so close that I, at times, would visit my boyfriend's mum, bond with her and even share meals," says Rose.

Then all of a sudden, she says, things went wrong, and the mama's boy began playing 'hide and seek'; he began ignoring her text messages and phone calls, and always feigning busyness! "When I paid his mother a visit one weekend, I got the shock of my life. His mum told me he was no longer in love with me and that he had moved on. And went ahead to tell his mum to inform me to move on," explains Mwende, as she add that this was the hardest time of her life.

Mwende is not alone. Josephine Njeri's experience was even more unpalatable. Just when she was playfully 'boasting' to her visiting friends how handsome her boyfriend, who was abroad then, was as she talked to him on Skype, he dumped her, telling her, "this thing (long distance relationship) is not working for me, let's just be friends".

"I have never been so embarrassed and pissed off with a man. I felt like smashing the laptop. I hurriedly shut down the damn thing and drunk my sorrows all night," says Njeri. She proceeds to confess that her girlfriends' initially laughed their heads off, but later consoled with her, and drunk the night away as they encouraged her to take heart.

As a woman, what would you do if your boyfriend dumped you by leaving you in a hotel while on a date with a huge unpaid bill? That is exactly what Ken Inziani did to one of his exes.

"She was in the habit of annoying me and laughing it off whenever I expressed my displeasure. On this particular day, she kept chatting and chuckling with some of her friends on WhatsApp and Facebook, and paying very little attention to me," says Inziani. Push came to shove and half way the date, Inziani could not take it anymore; he calmly excused himself and vanished without a trace, leaving her with the huge bill to settle.

And if you thought it's only Kenyans who get crazy when breaking up or you are in for a rude shock. Some of the circumstances under which Mzungus break up and divorce will make you roll on the ground with laughter. Take for instance, in Taiwan where sex has allegedly been made to look evil, the case of a man who divorced his wife for being 'too shy' to consummate their marriage, after a year! China Times reported that the man surnamed Chen, a 38-year-old teacher from Tainan County was introduced to a woman surnamed Lin, 29, also a teacher, by a matchmaker.

The couple got married after dating for three months, but Lin refused to consummate the marriage. On the wedding night, Lin slept fully dressed and wrapped herself in a duvet.

When Chen tried to undress her in readiness for the inaugural gland-to-gland combat, she pushed him away shouting: "You are ridiculous!" Ha!

The next morning Lin returned to her mother's home saying she was ill, and would not live with her husband again. Through the matchmaker's mediation, Lin signed a contract agreeing to consummate the marriage but only for the purpose of procreation, and demanded to sleep separately.

However, she did not live up to the pledge. Consequently, Chen filed for divorce, which Lin contested, claiming that she refused to consummate the marriage on the wedding night because she was too tired!

But the judge said it was strange for Lin to refuse to consummate the marriage for one year, so he granted the divorce, and ruled that Lin compensates Chen NT$300,000 (Sh879,102) for dowry wasted!

It gets even crazier. A 52-year-old woman in Taiwan divorced her 55-year-old husband, Zhou, over the size of his penis. According dailychilli.com, the woman, Zhang, said, 'His penis is so small, like a kid's, only 5cm long. We've never had sex in our entire marriage.'

The newspaper said the two met in July of 2008 and got married five months later. She wanted to have sex prior to the ceremony, but he refused on religious grounds. Zhang says she discovered the issue on their wedding night and asked him to seek treatment.

They spent some time together, hoping the treatment will have an effect but wapi (nothing of the sort)! She divorced him.

And sticking with matters to do with penis size, a man was divorced by his wife after his penis extension snapped off and broke during a wild bedroom marathon. Doctors in Russia, had fitted the special prosthetic when Grigory Toporov, 47, told them he didn't measure up to his wife's expectations in bed. But she was horrified when the extension broke off, and further got fed up after her husband who had promised to replace it never did so. So you thought that was crazy? Well, a Saudi woman asked for divorce in 2008 because her husband tried to sneak one look at her face after 30 years of marriage. Apparently, the Saudi Arabian man lived with his wife for 30 years without setting eyes on her face. Would you believe that? His 50-year-old wife strictly followed the tradition of her native village and kept her features veiled at all times.

One night the husband was overcome by curiosity and tried to lift his wife's veil as she slept to take a look at her face. It was an error he is unlikely to be given a chance to repeat for his outraged wife woke up during his sneak peek and decided to demand a divorce! The betrayed wife said her husband apologised and promised never to do it again, but she insisted she wanted a divorce. It may seem odd, but cases of Saudi husbands with wives forever shrouded in mystery are not uncommon.

In April 2009, a German woman, fed up with her husband's obsession with cleaning everything in their house all the time, divorced him on the said grounds! Their marriage had lasted 15 years, with the woman putting up with the man's fondness for doing household chores such as tidying up and rearranging furniture. She, however ran out of patience when he knocked down and rebuilt a wall at their home when it got dirty.

Elsewhere in China, a woman surnamed Luo, who lied about her age, was dumped by her husband after 10 years of marriage. Luo, who was 30 when husband-to-be Cen asked her to marry him, told him she was just 24. In 2007, Cen filed for divorce after realising he had been duped and the court granted his wish.

Wacky as it may sound, a Romanian woman unsuccessfully tried to divorce her husband in 2005 because she just couldn't stand having lunch with her mother-in-law every day. The 22-year-old woman had been married for only 10 months when she claimed her life turned into a nightmare because of her mother-in-law.

The woman told a judge that the presence of her mother-in-law at the most important meal of the day—lunch—with her teasing remarks had ruined her marriage. The court asked Mrs. Elena to reconsider her demand, advising her to find a better reason if she wants to separate from her husband.

How about the incident reported by Taiwan Courier Mail where by a carpenter who bought an adult DVD only to find out his wife and best friend (a butcher), whom he later stabbed, were starring in the film? The act apparently had been recorded using a hidden camera and sneaked into a blue movie collection titled, "Affairs with Others' Wives". The carpenter divorced his wife.

Reasons to why some couples divorce get even bizarre. Take for instance the case reported by Mail Online of a man who was divorced after he got on a plane, leaving his new wife for having taken too long at an airport loo.

Apparently, the two were flying from a holiday (funded by the woman. Hehe!) in Malaysia to Saudi Arabia, and the woman went to answer to a call of nature but took too long, pissing off her husband who boarded the plane without her! His wife was, of course, very angry. She demanded an immediate divorce!