Of Kenyans who wear dirty, torn underwear and how it kills romance 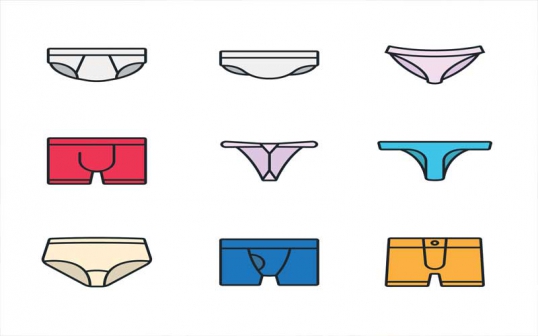 So the spies at National Intelligence Service think they are on top of everything in this country? Poor souls!

A top, sensitive secret that we can now confidently reveal and even bet that the nosy folks at the spy agency had no clue about is that most Kenyans, especially men, wear dirty, torn, discoloured rags, masquerading as underwear beneath their expensive, fashionable clothes.

A strange incident that partly gave credence to this scandal happened recently. A well-dressed man fainted, forcing good Samaritans to rush to his aid. They laid him on a pavement, spread him out and began loosening his clothing as they fanned him for fresh air.

While this was going on, a bunch of curious onlookers could be seen unsuccessfully suppressing giggles.

Reason? Despite the neatly pressed suit, Italian shoes and nice cologne, the man had worn a torn, dirty rag for underwear! That a man of his stature had such a tattered thing for underwear not only shocked, but also tickled the crowd.

“Gosh! Even with that nice suit and those shoes, this dude has torn underwear,” a female passerby loudly whispered to another, amid suppressed chuckles.

“Huh! You think all these people around here, especially men, have clean, nice underwear?” rhetorically retorted another onlooker, sending the crowd in gales of laughter.

That the incident at hand was a matter of death and life did not stop Kenyans from making fun of it, albeit in hushed tones, especially the torn underwear bit.

The incident made these writers curious and they investigated further on it. Underwear, believe it or not, comes in all shapes, colours and sizes — many of them a walking disaster. So in case you are wondering why your newly found lover suddenly disappeared — no more phone calls and text messages — blame it on that black nylon underwear you wore on your last date.

For all their dirt, men admire clean white underwear. In fact, many of them dream of a romantic night with a partner in sexy underwear. Dirty, old undies kill romance. No wonder a few years back, the hit song Adhiambo Sianda (translated Adhiambo’s bottom) became one of the most popular songs in Nyanza because the musician, Otieno Rachar, sings in praise of a woman’s white underwear.

But we have discovered that if people were to be stripped naked, more than three-quarters of the handsome and beautiful individuals in expensive suits and dresses walking on the streets would be found guilty of wearing dirty or worn out underwear.

“Most men have rags for underwear. You would be shocked if all these men you see in the streets were asked to undress. At least women try. But there are many grown men who wear same underwear even for the whole week,” says Rose, a city resident.

Surprisingly, it also said that some women are shockingly dirty. Wanjugu, 27, an accountant with a law firm in Nairobi, got the shock of his life when he visited a woman he had been chasing for weeks.

“When I went to her bathroom, I noticed that she’d hang a panty that was old and terribly stained to dry on a nail. I was disgusted. I pretended to have a headache and left an hour later. I just couldn’t touch her and have never called her again,” says Wanjugu.

While most men won’t be bothered to buy new underwear and can wear the same rags for years, the worrying trend among women is that many of them walk around with a hole in their underwear.

“Nothing puts a man off than a well-dressed woman wearing a torn panty. It smacks of carelessness and irresponsibility. I would not associate with such a woman,” says Makali Otswila, an upcoming musician.

Makali wonders why a woman would invest thousands in her hair but neglect her most prized possession. “It means she is just pretending to be nice on the outside but is actually rotten on the inside.” According to Atieno, a primary school teacher in Umoja, Nairobi, most men, unlike women, simply don’t care about what they wear inside.

“They expect us to understand that men are naturally untidy, but they have no idea how much it puts us off,” says Atieno. “In fact, married men are only better off either because their wives buy them innerwear, quarrel and nag them to style up or simply gather those old discoloured garments and throw them in the dustbin.”

But the men we spoke to argue that what a man wears inside shouldn’t be a big deal. “Underwear is basically ‘non-essential’ stuff. I would rather buy a nice watch than waste Sh1,000 on something no one sees. It is not like women undress us anyway. In fact, casual girlfriends never even get to see our underwear because we remove ‘everything’ at once,” chuckles Sam, a cyber café operator.

What Sam may not, however, appreciate is that certain situations force men and women to undress — like the aforementioned fainting incident. In fact, were it not that medics are cold blooded professionals, they would be breaking into laughter each time an expensively dressed man was wheeled into the emergency wing, only for his dirty little secret to emerge.

Jacinta from Karen swears she would never date such a man. “A man who cannot take care of small things like his underwear cannot be trusted to take care of a woman, leave alone children or a home, so he might as well go to hell,” giggles Jacinta, adding that men are the biggest culprits.

Her disdain originates from the first man she dated, a clumsy fellow who nearly put her off men and sex.

“He was wearing this horrible looking orange thing. It made me wonder what I had got myself into. I never spoke to him after that because he made me feel cheap and dirty. To this day, I can never think of him without the image of that orange thing crossing my mind,” adds Jacinta.

Silas, a technician who is married with one child, says he is on the verge of marrying a second wife because he does not like what his current wife wears. He says wearing boring lingerie is a common problem with most married women.

Hear him: “When we were dating, and just when we married, she always wore classy stuff. It’s actually one of the reasons she drove me crazy. But as soon as we got married, everything changed. She no longer gives a damn. I thought it’s only her, but some of my married friends experience the same.”

What angers Silas is that she has a pretty good job, making him wonder why she insists on wearing cheap old things with a hole in them or this funny habit she has developed of buying second hand innerwear and bras.

“I frankly don’t understand why she would want to buy something another woman has worn for years and discarded, when new panties go for as little as Sh100 in the shop. It’s such a turn off,” Silas says with a frown. But asked why he just couldn’t walk into a clothing store and buy sexy underwear for his wife, Silas says he fears that would embarrass her.

“How do you honestly tell your wife that her underwear is bad? Besides, women are crazy. She might accuse me of having another woman. I mean, how would a man be expected to know the latest fashion trends for an item that he is only expected to see on his wife — especially if her taste is awful?” he poses. Jeff, a hotelier, has no such qualms. “I studied the situation quietly and took charge. So every Valentine’s Day, I buy a handful of those things in the guise of ‘love’. But the truth is the situation was bad. You don’t want to know how embarrassed I got when she went into labour suddenly and had to be undressed by nurses in my presence.”

Women, however, argue that it is men who are the biggest culprits because most of them only got to wear that garment for the first time when they joined secondary school. From wearing dirty, tattered strings, most men — some who buy beer for their friends daily and drive nice cars — spend as little as Sh50 on underwear, yet they would never be caught dead wearing ‘cheap’ shoes or suits.

“Men never create time to buy underwear, hence the sorry rags they hide underneath their crisp suits,” Rose, a marketing executive, notes, adding that men only style up when they get married.

Those who neglect this little item of clothing could, however, do themselves a favour by listening to hawkers. At busy bus stops, naughty hawkers, obviously male, often display new underwear through bus windows chanting, “Vifuniko za asali (honey bottle tops)!”

In their cheeky way, and much as everyone pretends not to notice their colourful wares, they announce one fact; that genitals are, to the body, what a door or gate is to a home.

And just like it is ridiculous to build an expensive house with a cheap door, it is similarly crazy to trot around with an expensive handbag yet you are dressed in a second hand innerwear, with a hole in it.