﻿﻿ Evewoman : The chronicles of misery: Too much alcohol cheapens a woman ​
​

The chronicles of misery: Too much alcohol cheapens a woman 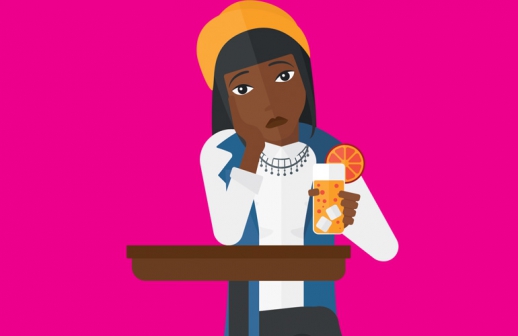 The ugliest words ever uttered by a woman in my presence were, "hebu tukatoe lock". For those who don't speak Sheng, that means, curing a hangover by taking more alcohol especially on a Saturday or Sunday morning after a long night of bingeing.

It is purely a male ritual, especially among inveterate alcoholics, that women must never adopt. In my book, it is fine for a woman to drink and having fun. But they must not drink to a point where they do not know their last name or their way home. We live in a dangerous world. Doubly so for women. And I'm rarely sorry for self-inflicted problems.

A year or so ago, in one of those, long weekends with a public holiday on a Monday, I joined some friends in their house for what turned out to be a long weekend of bingeing. I have never seen so many bottles of Vodka and more pricey whiskey in one house. And I have never seen women get so drunk, actually out-drink the men in such spectacular fashion. It started on Friday, and did not stop until that Monday afternoon.

We were about six men and four women, all related, so there wasn't any hanky panky as you are wont to think. It was one of those weekends where you drink, and drink and drink some more as you catch up. But I was appalled by the ladies.

See, it was fun the first day. But the second day, you wake up get to the sitting room and there they are lying on the carpet, unconscious, oblivious of how they look. Their hair looked pathetic. They were never in a hurry for a shower, and that weekend they wore those ugly T-shirts that kill all the lust in the world, even if Kim Kardashians wore them.

Every weekend I see women in drunken stupor and I cry within. I see women staggering, and believe you me, that ranks as one of the singularly ugly incidents like the site of man crying over a woman. I see women using foul language. I see women sleeping or doing strange and bad things with strangers and I pity them.

How did we get here? Since when did we okay women drinking and behaving worse than drunk men. It is bad enough when men drink and behave like unruly teenagers. It is uglier if it is a woman who is being picked from the trench. While I'm no moral police and can't decide how women should behave and spend their money, it is within my right as a good citizen to remind them that drinking too much brings the worst out of them and endangers their life.

Of course they know that too much alcohol has irreversible biological consequences. But my gripe is on the social front. No woman who drinks too much will, for example, have a fulfilling relationship. Men, even drunkards, hate women who drink like thirsty camels that have happened upon an oasis in a desert. We want women who drink, but moderately.

There are reasons why women drink too much. But maybe they come from broken families. Maybe they have been disappointed by life. Maybe their men cheated on them. Behind every drinking woman, is a failed relationship.

My advice for all women is to guard their dignity as much as possible. Shun bad habits that will make men and your family shun you. You might say that it is your life, but unfortunately, it is not. We don't exist in a vacuum. You can still have fun by regulating your drink and doing the right thing.

Your dignity is very important. Too much liquor and addiction makes you cheap in the eyes of men, women and society and it predisposes you to a lot of danger and unnecessary misery later in your life.