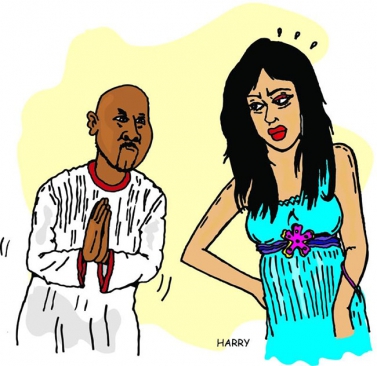 One of the uglier sides of human existence is that women have taken up all the bad habits of men, personalised them and unleashed them on unsuspecting men with impressive precision. It can be drinking too much, driving recklessly, casual sex, and everything that men initially controlled.

Take my friend Arthur, for example. A cool, gentle chap, and handsome if you will (no homo). He met a beautiful, albeit plump woman in a train to Mombasa over Easter. They hit it off and got along fine like lovers are supposed to. The lady, although snooty (she could not eat on the wrong side of Moi Avenue), was the marriageable type given she had all the desirable traits (beauty, educated, good job except for the manners, which is something can be worked on if need be).

They dated. Arthur was head-over-heels and ahead of himself before she pulled a surprise. She packed and left. Just like that. Arthur was devastated. He could not find anything wrong with himself.

Arthur is not alone. I know more than ten men who have been dumped by a woman who had the potential of becoming a wife or long-term girlfriend. And one day you meet in a bar, the man is depressed. You buy him beer and you ask;

"Son, what is the problem?"

"Hilda left," he says, suppressing a sob, but the pain of it all is the tone.

"Is it something you said or did?"

"No. In fact we ate out together last night, she was bubbly and in a upbeat mood, today I woke and she said she needs a break."

You gaze into the space. The beer is now sour and you must play Dr Love and help a brother out. Thankfully, he is honest. Most men ideally decide they are the ones who dumped the woman just to massage their ego. But the modern man is real.

What these men find themselves in is called a 'catch and release' game. Previously it was called 'hit and run' implying that the woman who had been left was a victim of the 'accident' and the man the criminal drives who drives away. But women do it differently. And it is not one-night-stands I'm on here or flings that are doomed to fail from the outset.

And what I have observed most women who catch and release men is that it has nothing to do with commitment phobia. It is more like that women now have power and they are not afraid to exercise the powers. And in retrospect, I have realised that women who use men and dump them often start the relationship or lead the men on, giving them false hopes before pulling a plug without as much as an apology, much less a backward glance.

A dumped man is normally a depressed being. He will blame the size of his manhood, bank account or some biological problem like halitosis or smelly feet and might take to alcohol or drugs. Little is known to them that women have changed the way they do their things.

Men better brace themselves for the dicey dating field in the modern world.