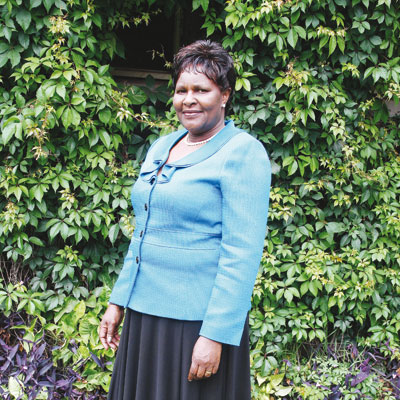 The sight of a wide array of trophies carefully and neatly arranged on a table in Rosemary Saina’s spacious office is perhaps what signifies the numerous achievements that Kenya High School has recorded both academically and in sports.

ALSO READ: Why you need to give your child the sex talk now

The school, which has been under the leadership of Saina for close to 14 years, has grown in leaps and bounds, and is recognised as one of the academic giants in the country.

Saina has a genuine personality, she is down to earth and easy to talk to, I found out.

You can be forgiven for thinking her journey of self-discovery has been a one-way ticket to the sunny side of life, but it hasn’t all been smooth sailing. However, it’s learning how to take the rough with the smooth that has shaped her into the woman she is today.

Born 58 years ago in Nandi County, Saina grew up in Kapkagaon Village as the second-last born of six children of the late Frumenzi Maswai and Arnotha Chelimo. Her father died when she was only ten years.

“Though I was young at that time, I felt the void that my father had left. It was not an easy time, but God saw us through,” she says. “My mother ran a small hotel from which she raised money to educate us. She was a very hardworking woman who ensured we didn’t lack anything. At that time, life could not have been easy for a woman, but she didn’t give up on her dream for our success.”

From a young age, she learnt the ropes of farming and other family chores such as fetching firewood, things she loved to do.

“I learnt to farm very early and during the school holidays, together with my younger brother, we could go to farm using the oxen. Directing the oxen and ploughing in straight lines — this is one of my greatest childhood memories.”

Though her primary school was several kilometres away from home, she never failed to attend school.

“We used to walk for long, but that did not deter us from achieving the very best. My mother was such a disciplinarian and ensured we went to school without failure,” she says.

Saina dreamt of becoming a lawyer but this was not to be.

“I never thought I would be a teacher but during our times, career advice was so scarce; you gambled with what came your way. I am in the teaching profession, thanks to one of my teachers who advised us to go for Education since the chances of securing university admission and a job were high,” she recalls.

After graduating from the University in 1981, she was first posted to her old school, Moi Girls Eldoret (formerly known as Highlands School) where she taught History and Geography.

In 1990, she was transferred to Solian Girls High School in Eldama Ravine where she headed the school for a year before relocating to Nairobi in 1991.

She joined State House Girls as the deputy principal, a position she held for a month before joining Kenya High School under the same position.

In 1999, she was promoted to principal, a post she has to date rising up the ranks to the level of chief principal.

“When I started teaching, I grew to enjoy it and being with the girls made me love it even more. The beauty with girls is that they learn easily, have a positive pride, they enjoy responsibility and leadership, hence making it easy to work with,” she says.

“Kenya High School is one of the oldest schools in the country, which has deep rooted traditions. It has produced some of the great women we have today. In last year’s Kenya Certificate of Secondary Education examinations, we recorded a mean grade of 10.59, which is the highest we have ever achieved,” she says.

So what makes the school whose motto is ‘Servire est regnare,’ or ‘To serve is to reign’ tick?

“Teamwork,” she says. “This is a big school with many students and a large workforce, both teaching and non-teaching staff. This calls for a lot of teamwork and cooperation. I do a lot of delegation of duties, and I am happy that I have responsible and hardworking heads of departments and staff.”

Saina says despite the great success, they have had to put up with a number of challenges, most of which are to do with inadequate finances.

“Being an old national school that  stands on 100 acres, the operational costs are enormous. We struggle to maintain adequate staff numbers. There is also the challenge of keeping the school in a reasonable state, as we have to keep on carrying out repairs and maintain the grounds, something that is very tasking. The school also has many students having moved from five streams to the current six streams, while most of the infrastructure remains the same. These challenges have, however, kept us on our toes,” Saina says.

Despite her busy schedule, Saina says she plays her role as a mother and ensures she sets aside to spend with the girls.

“We hold our assembly every Friday morning where we exchange ideas with the students,” she says.

Saina feels that she has done her part and hopes whoever that will take over after her retirement will continue the good work she started at the school.

“When I was appointed as a principal, I was a bit hesitant since I enjoyed teaching a lot, but I thank God for the chance,” she says.