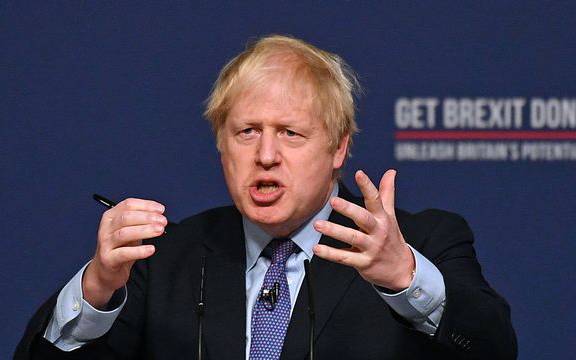 Boris Johnson (pictured) has been accused of fuelling racism by the man in charge of European football.

Aleksander Ceferin, President of governing body UEFA admits it needs to get its house in order but rejected criticism from the Prime Minister.

He said: “When a politician that calls women with burqas post boxes or mailboxes then says publicly that he condemns you UEFA - Do you reply to that? Do you believe it's honest? Come on.”

In a rare interview, Ceferin told The Mirror: “The situation in Europe is more and more tense.

“When you see high politicians, Prime Ministers - when you see presidents of Republics who are racists, who were sexist, you see that something is wrong.

“Because if you see an idiot from the streets shouting you say: ‘Okay, put him in prison and that's it.

“But when politicians start speaking they are not punished.

In October Johnson called on UEFA to get tough on racism after England’s footballers were subjected to monkey chanting during a European Championship qualifier in Bulgaria.

Johnson refused to apologise on TV last week for describing Muslim women wearing the burqa as looking like letterboxes, insisting he was making a ‘liberal case for women being allowed to wear what they want.’

During a special BBC Question Time, he was again reminded of his descriptions of black people as ‘tribal warriors with watermelon smiles’ and ‘flag-waving pickaninnies”.

Asked whether he’d ‘personally contributed’ to increasing racism in Britain he refused to apologise, saying: ‘I defend my right to speak out’.

Ceferin has promised to make UEFA more accountable and its ten-man all-white disciplinary committee more diverse so that the organisation can have more empathy with black footballers enduring racist abuse.

Influential black members and women will be brought in when UEFA holds it’s next committee meeting in March.

Ceferin said: “Everything is ready, so that we can put in additional members of disciplinary committee because now it's a fixed number.

“We have already some proposals. But it's too early to speak publicly about it.

“It will happen in March. The statutes will be changed. And then a week later we can do it.”

Footballers and fans across Europe have voiced their anger at the organisation, accusing it of failing black players by not punishing clubs and countries with racially abusive fans hard enough.

Black players have instead started walking off the pitch in protest at the game and the officials’ inability to protect them.

UEFA faced an outcry last month when Bulgaria was fined just £75,000 and made to play one game behind closed doors - with another suspended - because of the treatment of their fans of England’s players in Sofia two months ago.

In April Montenegro was ordered to play one match behind closed doors and fined £17,253 by UEFA for their fans racist abuse, also directed at England’s players.

At the time Tottenham left-back Danny Rose revealed he could not wait to finish playing because of the lack of protection for black players within the sport.

Last week ex-Manchester United striker Romelu Lukaku pleaded yet again with UEFA to do more to protect black footballers after he was racially abused, this time playing for Inter Milan against Sparta Prague.

In September Lukaku also suffered monkey chanting playing for Inter, this time as he prepared to take a penalty at another Italian club, Cagliari.

A week later clubs across the country refused to play in the first minute of their matches, standing still in solidarity.

Liverpool ’s Dutch midfielder Gini Wijnaldum also insisted he would join other players in walking off the field if he or a team-mate received racist abuse.

Ceferin fears the rise in nationalism has emboldened more and more people across Europe intent on intimidating black footballers.

He added: “They don't care about football. They care about their own own idiotic ideology.

“And that's why football is a reflection of society. It brings the worst to the stands. I still think that 99% of football fans are not racist.

"But those idiots ruin everything. Then this attention is what they care about. They don't care about football. Even if the players walk off.

“They will enjoy it. Only real football fans would suffer. If we stop the match they enjoy it. They don't care.

“Do you think you think fans in Croatia who draw a swastika on the pitch care about football?

“No, they don't. They are exactly like Nazi Party in the 30s or the last century. And if we say we can't do anything anymore then we should stop doing anything.

“I’ve said before, it cannot be solved only by football. Governing bodies have to be helped by the government because for me If you are chanting or showing Nazi signs, that's a criminal act.

“I speak with our colleagues, with my colleagues from the football Federations [across Europe].

“The other day I spoke with two or three of the very big countries in western Europe and they are worried. They say that thirty percent of the world probably supports the extreme right?

“So it's a frightening, frightening situation. Of course, there are two ways of looking at it: One is, yes, we [football] attract it.

“The second is that we can use football to do things because we have power. I don't run away from that. We have power because if we do something it's always big.