Waiganjo, a man who commanded fear and love in equal measure 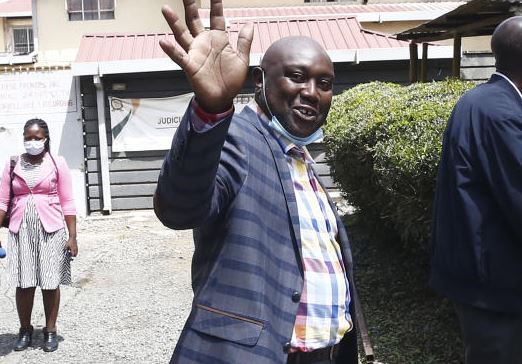 Joshua Waiganjo (pictured) who rode roughshod in the police force between 1999 and 2012 was, after all, in service legally.

The court vindicated him of the police impostor tag after the prosecution failed to prove a case against him.

According to his CV, Waiganjo joined service as police reservist and later rose through the ranks to an assistant commissioner of police.

From his CV, he served as police reservists between 1999 and 2000 under the supervision of OCS Kitale. He was in charge of all KPR.

Between 2003 and 2013, he served as assistant commissioner of police.

In his days, Waiganjo commanded fear and love in equal measure.

If you crossed his line, you would live to regret and if he loved you, his enjoyment of the trappings of power would be extended to you.

Peter Njeru, who was the first prosecution witness and at the time of testifying was the OCPD Mbooni East, Makueni County, said Waiganjo in July 2012 visited his office in Njoro where he served as the OCPD.

Waiganjo, he said, visited his office and introduced himself as a senior superintendent of police and was wearing a jungle uniform with an insignia of SSP.

Njeru said Waiganjo informed him he was an officer attached to Anti-Stock Theft Unit.

Njeru said later his junior officers reported to him that Waiganjo had harassed and scolded them for performing duties without headgears.

Njeru further said Waiganjo, three days later, visited him at his workplace using the same Land Rover and requested him to have a case in which his mother was the complainant withdrawn.

The then Njoro OCPD, however, asked Waiganjo to make withdrawal request through court prosecutor.

Evidence in court indicate Waiganjo informed the OCPD that there were police promotions in the pipeline and that he had requested the then Commissioner of Police Mathew Iteere to consider promoting him to the position of assistant commissioner of police.

“The third accused person again visited the witness two days later, this time donning the rank insignia of ACP. He told PW1 (Njeru) that he had been promoted to the rank of ACP,” indicated court records in part.

At the request of Waiganjo, Njeru visited his Njoro home. He found him with the PPO’s security officer only referred to as Police Constable Simiyu.

Being in a group of four, they visited Waiganjo’s father who was in company of other four men introduced to them as pastors of Full Gospel Churches of Kenya. The purpose of the visit was for brief thanksgiving prayers for his promotion.

Njeru said on September 13, 2012, Waiganjo called him and informed him the PPO had authorised him to use an official vehicle belonging to Njoro OCPD to travel to Londiani where he was to represent the PPO in a Kenya Forest Service pass out ceremony.

Upon confirming from the then PPO John M’mbijiwe, a Land Rover registration number GKA 731Q that had been allocated to Ndeffo Police post was released.

Police Constable Ndung’u of Mau Narok Police Station was to be the driver.

Njeru, despite being the OCPD, declined to sign work ticket for the vehicle and requested that M’mbijiwe does it in his capacity as senior police officer. The vehicle was returned at 7:30pm that day.

Njeru later realized the work ticket had been purportedly signed by one Bakari Shamdan who was the transport manager who later disowned the signature.

The OCPD said he had no doubt Waiganjo was a police officer and a powerful one. He gave instances where he had been unable to get a vehicle allocation for Njoro but when he (Waiganjo) made an intervention, a brand new vehicle was allocated.

In another instance, Waiganjo asked Njeru to propose to him an honest inspector of police to deploy at Suam Police Post on the Kenya-Uganda border. Njeru proposed Inspector Gift Mshila and true to it, the officer was immediately deployed to Suam police post.

Waiganjo on December 9, 2012, is said to have requested Njoro OCPD two police officers to provide security at his father’s home during a fundraiser. The officers went, but Waiganjo complained they were late. Retired General Lazarus Sumbeiywo allegedly was a guest in the event.

The OCPD said he started suspecting Waiganjo and avoided his calls.

On December 22, 2012, Waiganjo’s brother is said to have had a wedding which the OCPD had been invited, but never attended. A police vehicle is reported to have been part of the procession.

Police Constable Jackson Makaya told the court that he met Waiganjo in October 2012. He was on patrol with others and at about 11pm at Soysambu flagged down a lorry with no number plate. The driver alighted and informed them he was a police officer and the lorry belonged to a senior officer.

The following day, Makaya was summoned by his OCPD and asked why he mishandled a senior officer. He was sent on leave for 30 days and later redeployed to drive a High Court Judge in Nakuru. After two weeks as the judge’s driver, he was transferred to Kakuma.

Gathigia said in November 2012, she reported to Waiganjo that she had been tasked to perform night duties by a senior officer because she had rejected his inappropriate advances. She sought Waiganjo’s assistance for redeployment.

Later that month, Waiganjo asked the female officer to see the PPO who in turn told her the redeployment will be resolved.

Waiganjo, upon being acquitted of three charges of impersonating senior police officers, said he knew the case against him would crumble.

“The court has finally determined that all allegations and charges that were preferred against me were nothing than false claims,” he said.

Waiganjo said he would discuss with his lawyers the issues of compensation, if need be, upon which he will let the public know.

M’mbijiwe, on his part, said the court’s decision was a reflection of what he had said during a press conference before his arraignment.

“I said that justice will be my shield and defender and it has come to pass as I have been vindicated,” he said.

Dock workers claim the port is being controlled by a few interest groups.