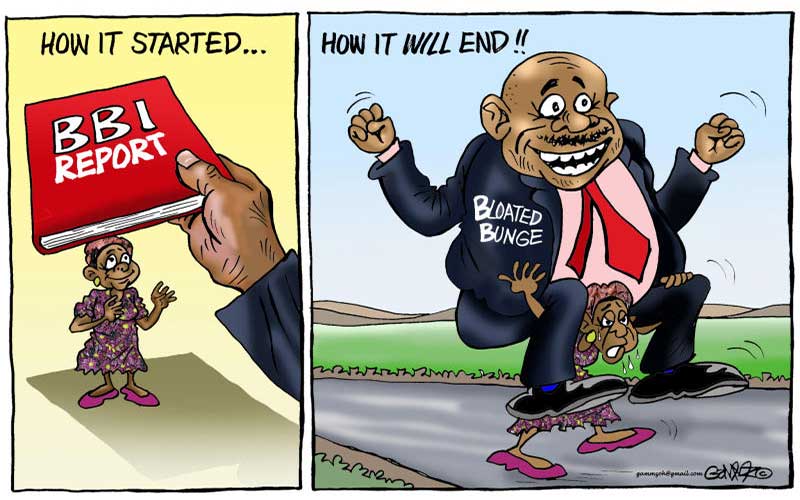 The Building Bridges Initiative (BBI) is experiencing strong headwinds and despite the assurances – and denials and show of bravado mainly from the co-sponsor Raila Odinga – that all is well, the way ahead looks rough and treacherous.

In comparison with the path to the passage of the 2010 Constitution, BBI is hamstrung by the overwhelming sense that it is an agreement between two former political competitors. The 2010 Constitution had a wider public appeal that transcended politics, tribe, culture, class, race and colour.

And so one can understand why President Uhuru Kenyatta and Mr Odinga have a huge fight on their hands: They are coming up against what is generally noxious about our (and most) democracies; entitlement and hypocrisy. And the reason for the aborted renaissances since 1963. And that won’t go away quietly. In 2018, BBI offered us a chance to break clean from a dark past of organised political gangsterism fashioned as democracy. On the face it, BBI was borne out of realisation that elections were pointless rigmaroles conducted just for the sake of constitutional obligations.

Many had hoped that BBI would stop the ruling elite from treating the State as their own property; where cronies are given sweetheart deals in tenders and top posts are reserved for the fool of the family.

Making a pitch to seize the moment and invade Afghanistan following 9/11, former UK Prime Minister Tony Blair said the “kaleidoscope had been shaken… the pieces are in flux. Soon, they will settle again. Before they settle, let us reorder the world around us”.

No one could begrudge the president or the former PM the urgency to reorder things around. Sadly, it seems the pieces are settling before they can be reordered. It should worry them that the coalition of the unwilling is swelling by the day.

BBI suffers four inherent weakness. The first is the sponsors of the initiative did not clearly communicate their vision. At times, they were arrogant about the need to build a wider appeal, a critical mass needed to push the rock over the hill. They ploughed on obdurately. Two, the brouhaha is a demonstration of the weakness of the African social contract. Of deferential respect to the king; where the subjects are to be seen and not heard. This breeds delusion. For long, the people have remained marginalised from politics, except as masses to be roused for some cause or as rabble with which to frighten the bourgeoise. That is changing.

Three, BBI was premised on assumption that people fight because their leaders have missed out on spoils after an electoral contest. So, what to do? Get everyone a seat on the high table, they must have thought. First-past-the-post, the winner-takes-it-all and inclusivity have been unfairly butchered in the ensuing perverse push for political correctness. You could ask on whose terms and as defined by who?

In the business world, merger of two huge, fierce competitors is bad for competition and customers. Besides loss of jobs, creativity and therefore quality, suffers as competition is curtailed. Actually, the real risk of a monopoly is that it reinforces a sense of laissez faire from knowing that the customers have no alternative. Usually, people settle for substitutes then.

And as I observed two weeks ago, BBI’s biggest handicap is that it doesn’t transport our imaginations beyond Uhuru, Raila and DP William Ruto. Neither Uhuru nor Raila has been convincing in painting how success looks like.

Few believe them when they say nobody will ever shed blood because of political contestation because many feel that both have unwittingly benefited from chaos in the past and have done little to disavow that dark past, especially when it suits them.

The picture of shared prosperity is distorted because the detractors have succeeded in painting BBI as a plot to create more seats for the ruling elite; an attempt at self-preservation, power-grab; malevolent schemes by the elites and the political class to self-preserve.

Ordinary people are generally concerned about good governance and a thriving economy regardless of which party or politician wins the elections.

“We don’t want more government… we want better government,” declared the Kenya Conference of the Catholic Bishops last week. In the absence of an alternative, what is to stop the people from trying the substitute?

-Mr Kipkemboi is an Associate Editor at The Standard. [email protected]

By Andrew Kipkemboi | 2 days ago

By Rose Mwaura | 3 days ago

By Michael Kiptoo | 3 days ago

By Isaac Kalua | 3 days ago