It's time to come out, be on the forefront of fight for rule of law 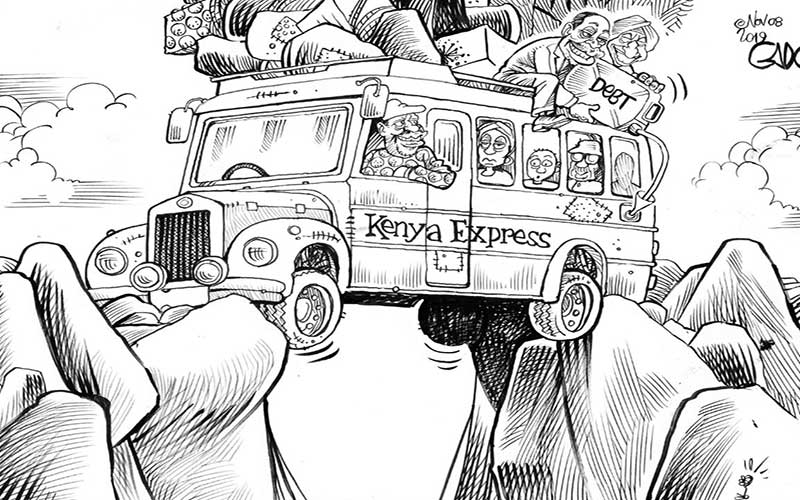 Turbulent times have started, and it will only get worse over the next years. The country is broke, people have been laid off, farmers unpaid, and desperation is seeping through. And all because of the unprecedented greed, looting and corruption by this regime.

It is looting that makes us so indebted as a country, for we took out loans from China and commercial banks, skimped off a chunk and then used the remaining monies to build gadgets that will not pay for the loans, as in SGR, or paid for the travel, entertainments and salaries of big people in power (Eurobond).

We now know that the folks at the Treasury have been cooking the books. The same folks who signed contracts with bankrupt companies to build dams and then paid for the dams without an inch of ground dredged.

Forcing everyone and every container on this SGR will never pay for the exorbitant SGR loan, yet the State keeps at it, afraid to make better but humiliating decisions that may expose the theft.  So, the regime keeps treating the people of Mombasa like the unwanted stepchild, bearing the brunt of bad decisions more than anyone else. And in attempting to mollify the growing anger in Mombasa, the state adds insult to injury by making promises for more investment, predicated on debt that it will probably not get given its decreasing creditworthiness.

If development and investments by this regime means more of SGR-type projects, please resist. For this will probably hurt us more than it helps! Take the proposed for-the-rich Nairobi Expressway for instance. If you believe that only the users will pay for it, you must be living in another planet! If it does start, I bet that Mombasa Road from the airport will often be closed for “repairs” forcing every user on the Expressway paying tolls, to pay for the huge debt for a road meant for the rich.

It has been this turbulent before, in the 1990s, and as lawyer Pheroze Nowrojee reminded the audience during the Yash Ghai tribute, it was lawyers then at the forefront of fighting for the rule of law and human rights, steadying the turbulence. Even though the courts then were fully under the control of the Executive, the Bar, by its commitment, courage and sheer numbers, pushed back and reduced some of the excesses of repression.

In 2014, Pheroze looked into his crystal ball and predicted that by 2017, the Judiciary would be the main target of attacks because it had begun to stand up and defend the rule of law, and the Constitution, taking up the role that lawyers had played in the 1990s. How prescient he was! It took four judges of the Supreme Court to finally do the right thing during the election petition, and acknowledge that those in power manipulate and steal elections, and that the opaqueness by the election body, the refusal to follow the law is all meant to lead to the result that those in power want.

And since then the Judiciary has been attacked like never before. Director of Public Prosecution Noordin Haji showed why he was appointed after secret interviews by persecuting Deputy Chief Justice Philomena Mwilu, who was the intellectual leader for transparency and openness in the petition.

While DCJ Mwilu may be accused of bad judgment and poor choices with regards to her finances, it was clear that prosecuting her was a message to the other judges.

Reducing the Judiciary’s budget by 50 per cent, without discussion, was a sign to show who is more powerful among the branches of government. Did anyone notice that Parliament’s budget — larger than the Judiciary’s with less staff and geographical reach — was not touched by these cuts? Or the massive entertainment, travel, clothing and other luxuries of State House were not touched? Sheesh, Mr Uhuru Kenyatta proceeded to hire a luxury jet to fly to Japan and Russia as the Judiciary budget cuts were made!

And then there is the weird refusal of Mr Kenyatta to follow the Constitution and gazette the judges appointed or promoted. This is as much a statement of power and grabbing powers that do not sit in his office, as anything else, though the word is that he has some judges he wants on the Court of Appeal and some of the promotions took “their” spaces.

It is refreshing that there are many judges, and magistrates, committed to the rule of law and the Constitution today. They have understood that the main danger in any country is those with power, and it is therefore right to always scrutinise carefully what the state does and why.

It helps that there are more committed judges than there are sycophants, but it is important the Judiciary itself hold these judges accountable, as Khelef Khalifa has been demanding of the Judicial Service Commission in his complaint against Justices Githinji, Sichale and Koome of the Court of Appeal. Ultimately, as the Judiciary takes it role at the frontline, it is time, as Pheroze urged, for us all to come out in numbers — as we did in the 1990s — during cases that affect the independence of the Judiciary.

Kenya’s women and girls can improve their full potential only if they get the support they deserve.