The lavish lifestyle of diplomats 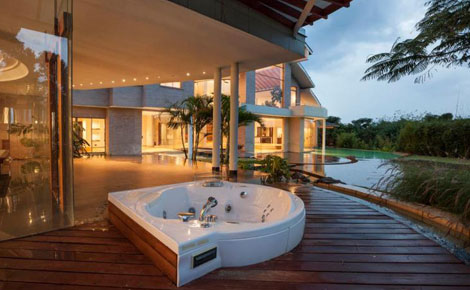 All over the world, diplomats and other high level expatriates have been known to occupy the best homes in the best locations in their host countries. The trend is the same in Kenya where diplomats reside in upmarket suburbs, where some developers have put up posh homes targeting them, write PETER MUIRURI and AUSTINE OKANDE

Last year, the Daily Mail carried a highly sensational story about Britain’s new Consul-General to Hong Kong Caroline Wilson who had taken up residence in one of the world’s most expensive pieces of real estate – the Opus, a new 12-storey block where a flat sells for £35 million (Sh5 billion).

Wilson had taken an entire floor measuring 4,600 square feet for which the taxpayer was forking out £60,000 (Sh8.65 million) per month.

Apart from stunning views through the floor-to-ceiling windows, the apartment boasts a marble dining table and pieces of art from around the world.

What it costs you to live in Nairobi’s posh suburbs

All over the world, diplomats and other high level expatriates have been known to occupy the best homes in the best locations in their host countrys.

The trend is the same in Kenya where envoys and other expatriates reside in upmarket suburbs like Muthaiga, Karen, Runda, Nyari, Gigiri and Kilimani.

“Workers in Kenya were put up in the plush Yaya Towers, which boasts an Olympic-size swimming pool and tennis courts. A one-bedroom flat there costs £580 (Sh83,675) a week to rent,” said the Daily Mail.

Recently, Home and Away accompanied a city property agent and his client, a middle-aged woman, who is the wife of an incoming ambassador, to scout for a new residence.

Our first stop was Lavington at an opulent five-bedroom home off James Gichuru Road. The property has a well-manicured garden, all ensuite bedrooms and two swimming pools with a servant quarter.

These alluring features notwithstanding, the client did not like the property because it had six carparks as opposed to the 12 she wanted. The other problem was that the master bedroom was overlooking a four-storey apartment.

“The high-end property market is very sensitive so are the clients, many of whom often want a home that matches their lifestyle,” said the agent.

He added that a client rejecting a property in this market segment was common as many already know what they want. “I have had clients who wanted a house with the master bedroom facing particular features like a mountain, water fountains, a garden or the sunset,” he said.

Our next stop was in the plush Nyari estate. We viewed a six-bedroom house on half an acre, with a splendid man-made lake and a view of the hills.

The client seemed happy. Armed with an Apple iPhone 5, she captured the expansive garden and vinyl rectangular gazebo as the agent whispered: “From the look of things, she is interested in the property.”

Homes in this estate are among the most expensive in the city, with some going for over Sh500milion. The Nyari ambassadorial home was 14,000 square feet, with an expansive living room that had double ceiling.

The house was also fitted with a gym, extensive balconies, an inside and an outside Jaccuzzi, and had two staff quarters.

The property also had a garage for 12 cars and was surrounded by two pools, which were used as moats. The house could accommodate 200 guests. She was impressed and openned negotiations with the agent.

“Other clients demand for bedrooms and bathrooms with colourful gypsum ceilings, with multiple lighting points to create the perfect ambience during the day or at night,” explained the agent.

We then went to a Runda home already occupied by a diplomat, a five bedroom house, with two large modern kitchens.

For diplomats, not just any neighbourhood will do. While it may be argued that their offices are in the same leafy suburbs, it is no secret that these areas offer the highest comfort in comparison to other city locations.

According to Knight Frank’s Prime Global Index, Nairobi has enjoyed the top slpot as far as high-end rentals are concerned.

But a report prepared for the company by Kate Everett-Allen this October shows that Nairobi has just been upstaged by Dubai as far as rents in this segment are concerned, in the second quarter of the this year.

Interestingly, rents in the diplomatic community have become a key factor in determining Nairobi’s global positioning.

According to Reema Shah, a property consultant at Palm Golding, envoys and other top expatriates do not just look for a house to live in but are interested in other social amenities that will closely match what they are used to at home.

“Security ranks top of the requirements since they can easily become targets of criminals due to their status. In addition, most of these homes are located near international schools, high-end malls and exclusive hotels,” says Shah.

According to Shah, most of the conditions that must be met before such people can settle are laid down by their own governments and are not open to significant changes either by the individuals concerned or selling agencies.

“Different countries have different criteria for their ambassadorial residences. In Kenya though, most foreign governments have bought property in which they house their ambassadors and other senior staff. It may not make economic sense to many, but that their decision,” she says.

These governments have no qualms renting homes in Runda, Kitisuru or Muthaiga for more than Sh600,000 per month or buying a house for over Sh100 million.

Such homes are the very epitome of luxury that ordinary citizens can only dream about. “These homes are tucked away in private settings to provide both comfort and luxury,” says Shah.

Take the example of a diplomat housed in Runda. What are some of the amenities available to them?

For a start, the home needs to be large enough to accommodate not only their family, but also high ranking government officials from both their host country and country of origin.Therefore, a large compound is a necessity.

We are all accustomed to the large gatherings hosted by the US ambassador every 4th of July in commemoration of the country’s independence.

Considering the hot climate in the tropics, a large swimming pool with a bar is an added advantage.

For outdoor recreation, teeing off at Windsor Golf and Country Club may not be a bad idea while networking with top members of the local business community. Taking leisurely walks at the nearby Karura Forest will occupy the rest of the family.

Jomo Kenyatta International Airport is easily accessible through the Eastern bypass rather than battling with the city’s chaotic traffic.

The diplomats can also demand for an office or study room, pyjama lounge and cocktail bar. When it comes to interiors, the ‘haves’ go for the most expensive.

According to Rupen Shah of Victoria Courts, most expatriates and ambassadors go for modern designs that suit their exotic lifestyles and often they buy their furniture in cash.

“They come to scout for furniture, then come back in a few days with a lorry and a final figure,” said Rupen. “They pick the best and the most expensive.”

Well, such conveniences are in order if a diplomat is to carry out State duties.

You are driving Kenya into a ditch, 20 diplomats warn politicians; Press Review

The clergy and diplomats unite to call for peaceful elections, Suing for peace

A suicide prevention charity on Wednesday launched a Twitter-scanning app designed to tip people off when their friends post potentially worrying messages.

By Peter Theuri | 33 minutes ago

Nyeri: Town that doesn’t aim for the sky
Feedback